Few media have fared well in voters' trust in 2013, but some outlets have fared much worse than others. News Corp's The Daily Telegraph remains Australia's least-trusted news outlet.

We’re even more cynical about the media than we were 12 months ago. And The Daily Telegraph has extended its “lead” as Australia’s least-trusted major newspaper.

Daily newspapers remained stable, with 48% of respondents professing some or a lot of trust, albeit with only 4% saying they had a lot of trust. Commercial TV news and current affairs, however, lost three points to fall to 41%; commercial radio news and current affairs fell from 46% to 38%; commercial radio talkback is trusted by just 31% of voters, about the same level of trust as in January (32%); and ABC radio talkback is trusted by 46%, down three points. Some 24% of people say they have “no trust at all” in commercial talkback radio, the same number as have no trust at all in blogs. 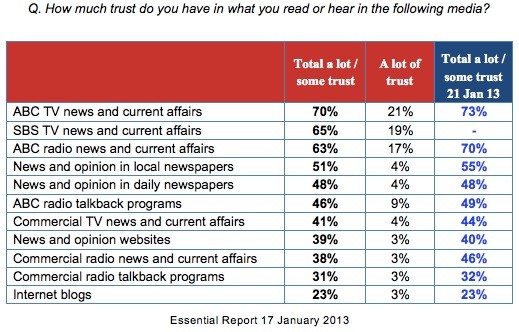 The trust of readers in individual newspaper mastheads has also generally fallen. The Age is Australia’s most trusted newspaper, with 68% of Victorian voters having some or a lot of trust in what they read in it, but it has fallen three points this year. The Sydney Morning Herald has fallen seven points to 64%, placing it on the same level as The Australian, which is pretty much stable. The Courier-Mail has picked up two points to 59% of its readers who trust what they read, while the Herald Sun has lost two points, with 48% reporting some or a lot of trust in the paper.

The collapse in trust in the Telegraph, which continues to run an aggressively pro-Coalition line months after the election campaign finished, follows a collapse in its sales: in 2013 sales fell by over 11% for its weekday edition, the same level as its Sunday edition and the biggest fall of any News Corp title, although not as big as the falls suffered by Fairfax’s metro titles.

The results suggest News Corp is on a difficult mission to convince consumers to join its war against the ABC, an organisation that, along with SBS, remains far more trusted for its news and current affairs content than News Corp outlets and newspapers generally.

And hence the Murdoch war on the ABC.

The Daily Telegraph in particular has been behaving like the propaganda arm of the Opposition before the election and has been boosting and running interference for the Abbott Government since then. As they say in the classics, is it true ir did you read it in the Telegraph.

The Teletrash isn’t a news paper – it’s a Murdoch views-paper, Dickensian as a caricature of all that is wrong with tabloid, selfish, self-centred gerbilism.

The collapse in trust in the Telegraph, …… follows a collapse in its sales: in 2013 sales fell by over 11% for its weekday edition, the same level as its Sunday edition and the biggest fall of any News Corp title, although not as big as the falls suffered by Fairfax’s metro titles.

Huh? so to use your usual biased laguage, there’s been a collapse in the Telegraph but just a fall in the Fairfax titles, even given their ‘fall’ is bigger than the Telegraph’s ‘collapse?

What’s the trust levels like on the interweb by the way?

Why am I not surprised about the Daily Telegraph. Interesting but I saw some numbers that its website is growing in popularity. Click-bait journalism?