Office Xmas parties: Scrooge visits some. A mole reports on the grim state of seasonal celebrations at CSIRO.

“Staff at the national science organisation have just been informed that they can no longer expect a freebie Christmas party, and that they have to pay for their own lunch and bring their own drinkies. Some genius in Corporate Finance decided that two weeks before Christmas, when most of the site parties had already been planned, was a good time to tell the staff this piece of news. A week later the staff were also informed that all international business travel, all of it, has to be approved by an authority no lower than the Chief Executive herself, who will now evidently be doing almost nothing else but checking travel budgets. At least she won’t have to fork out for her Chrissy party, as she won’t have time to go anyway.”

With Treasurer Joe Hockey getting stern with the nation about tightening our belts to avoid a deficit abyss, this kind of thing may become more common. Is austerity the order of the day at your workplace this Christmas? It’s not too bad at News Corp, where Melbourne staff are being treated to their festive shindig — with free drinks — at South Wharf on Friday. Apparently you don’t get a gift from Rupert. Here’s the Mexican-themed graphic on the invite (looks like Ms Tips’ kind of party): 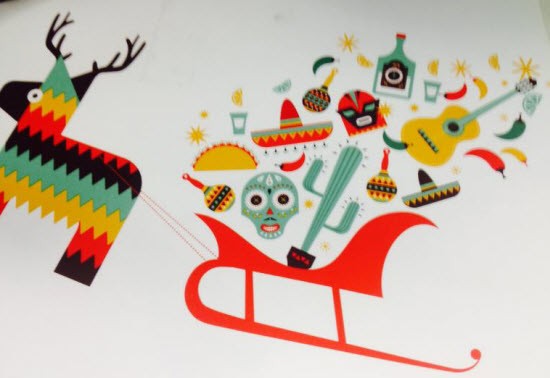 Over at Fairfax, are hacks still getting free drinks at the all-staff Xmas parties? Some are still reeling from the cancellation of the very popular staff Christmas picnics, effective as of 2012.

Send us your tales of presents, parties and decorations. And don’t forget that we love a good Christmas hamper anecdote …

Legal trouble? Is it true that a CEO of a government-run stadium is about to be sued for defamation by a event organiser? We’ll believe it when we see it — threats to sue are as common as flies this Victorian summer.

Empty chairs at the ATO. Where has everyone at the Tax Office gone?

“Australian Tax Office head Chris Jordan has just announced the cost-saving closure of two offices — Southport (Qld) and Hurstville (NSW), slated to take effect in 2015. Co-incidentally, an audit of vacant workpoints has identified some 4500 nationally, at estimated annual costs of $35,000 each. That’s well northward of $150 million a year.”

There have been some details on the ATO “empty desk” phenomenon in The Canberra Times; about 600 workers will lose their jobs as those two offices close. This is part of broader cuts, when hundreds more ATO staff will be shown the door. But you won’t hear any weeping in public about those sacked workers; not like Holden, is it? Never mind that if you have a properly resourced Tax Office, the government gets more revenue. They’re not blue-collar, so who cares.

Wilson in a flap. Freedom crusader and human rights advocate / opponent Tim Wilson was spotted dashing into posh tea shop T2 in Melbourne a few days ago in a last-minute rummage for presents. Some of those patiently waiting for service at the understaffed counter felt that he jumped the queue as he walked in and asked for help right away — though the description of the gift did sound lovely. We know that Tim won’t take us to task for running this tip, as he believes in freedom of speech above all else, right Tim?

Rogue MP strikes again. The office of a Victorian minister was thrown into confusion recently when a strange, irate man rang claiming to be a federal MP and demanding to speak to the minister. He rang several times, hectoring the reception staff. The incident led to messages being sent up the chain of command along the lines of “a man who says he is a federal MP has rung up, but we think it might be a prank because of his manner”. In the end, the receptionist had to hang up on the man.

It was actually Bill Heffernan.

And the winner is … “preference whisperer” Glenn Druery scored a nomination in Crikey’s Arsehat of the Year for 2013 award for teaching various fringe elements how to game the preference system at the federal election (this helped get some candidates who no one voted for over the line; they’ll c0-hold the balance of power from July). Thanks for the democratic result, Glenn. This was his response to the nomination:

Ms Tips has warmed to Druery for having a sense of humour and owning his nomination. So that means she’ll have to vote for someone else. You have til noon tomorrow to cast your vote in the 2013 Crikeys — check out the nominations here and vote here. May the best arsehat win.

Can we have the rundown on the staff karaoke selection, please!

Deeply ashamed that I subscribe to a publication that won’t out it’s own staff’s karaoke outrage.

P.S. If we can’t have the Snowdon karaoke files, could we at least have a (sealed section) expose of the bunker’s photocopier cache?

OK you’ve got me. Crikey is all about transparency!

Paddy performed Abba’s Knowing Me Knowing You to popular acclaim from the dancefloor.