Which news websites you’re clicking on — or not

Which news websites soared and which flopped in Australia in 2013? Crikey scours the numbers -- and the results may surprise.

As the UK Daily Mail readies for its assault on the Australian market, a survey of news website traffic shows dramatic fluctuations among the big players over the past year. The ABC, The Guardian and The Daily Telegraph were the big winners while the Herald Sun, The Age and Ninemsn recorded the biggest declines.

The rankings, based on Nielsen unique audience data for September-November, suggest two key findings. First: with a smart strategy, putting up a paywall need not crater your website traffic. And secondly, the Gillard government’s decision to amend the ABC charter to include digital services was far more significant than it seemed at the time. The ABC’s booming online presence did not cause the commercial media’s woes, but it is another headache for outlets desperately chasing digital eyeballs.

Populist News Corp Australia site News.com.au rose from third to first under the leadership of editor Luke McIlveen. No wonder Mail Online has poached him to run its Australian operation next year. News.com.au nabbed top spot in April and held on for six consecutive months. The site’s rise was helped by News’ decision to close opinion site The Punch in March and integrate it into News.com.au. 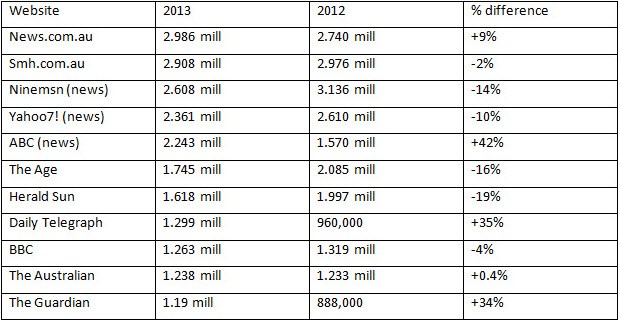 Ninemsn news sites dropped from first to third, shedding 14% of their unique audience. Fairfax’s Sydney Morning Herald held steady in second place despite a soft paywall going up mid-year. The figures for the month of November show smh.com.au in top spot with a unique audience of 2.94 million. Curiously, the unique audience for southern sibling The Age slipped by 16% over September-November while competitor the Herald Sun declined by 19%.

The ABC’s news websites recorded the biggest increase of the major sites: a whopping 42% year-on-year increase in unique audience. The Daily Telegraph managed to achieve a substantial 35% increase despite going behind a paywall mid-year. All News Corp’s local NSW sites, such as the Manly Daily and the Central Coast Express Advocate, now redirect to the Tele which helps explain the big boost.

British import The Guardian lifted its traffic by 34% on the back of a mid-year launch of its Australian operation. The Australian held steady with a unique audience of 1.24 million a month.

Even before it launches down under, Mail Online is already breathing down the necks of the big players. The mass-market juggernaut had an average unique audience of 1.14 million over September-November, up 4% over the same period last year.

Among other prominent news websites, The Australian Financial Review recorded an average unique monthly audience of 356,000 over the past three months and Crikey 220,000. Philanthropic outfit The Global Mail peaked with 52,000 in September.

A Nielsen spokesman said the company refined its online measurement system in May, which may have had some effect on year-to-year data.

Commenting on the overall figures, Monique Perry, Head of Nielsen Media, said: “During 2013 unique audience numbers have remained stable but engagement levels have significantly increased. Even with the fanfare of new arrivals — on average two new websites a month — the larger sites have grown, not lost share of time online.”

“Ninemsn news sites dropped from first to third, shedding 14% of their unique audience”

traditionally ninemsn have relied on page views from people simply logging out of hotmail. hotmail is now outlook and does not automatically load ninemsn on log out, which may explain this figure in some way

Does this take into account the people who go to SMH, click on a story, hit the paywall, go elsewhere?

Isn’t there an elephant in this room?
The combined SMH + Age is 4.65 million and leaves all others for dead.

To me this reinforces what I have advocated (in Crikey) for years and years: they should create a single integrated website. As it is they are almost identical and a single site must surely be more attractive to advertisers? (And presumably BrisbaneTimes and WATimes are also not included in these counts?)

Second, maybe I am hopelessly incompetent with my browser but the Fairfax sites drive me crazy with their auto-reloading. I am pretty sure there is no way to turn it off. One cannot scroll down the home page before it starts reloading. It also loads slower than comparable newspapers (like Guardian or NYT, and incidentally neither of which use auto-reloading). Consequently I never leave a tab open with either of these sites, which of course means I am less inclined to visit them.

This also begs the question: I presume that reloading the same page does not register as independent visits (ie. it has nothing to do with these SMH & Age unique visit counts?)

Single master home-site; no auto-reloading (or give option); fast-loading clean webpages with minimal auto-playing embedded videos (despite often fake option to deactivate). These are basics. What do the geniuses at Fairfax not understand about online audience preferences compared to, say, the top two (world) news sites?

Agreed Michael – mind you I’ve noticed that the mobile version of the AGE + SMH pretty much is the single website. I would also advocate that whoever does the advertising at fairfax get a little more computer literate. Many of the ads placed on the mobile site click through to websites that aren’t optimized for mobiles and impossible to view, surely this would be digital marketing 101!

Could the increase in the Tele’s website’s numbers (from a small base) be because ALL of their News Local publications now redirect to thetelegraph.com.au? Each paper used to have its own website but now they redirect to the the Tele/newslocal once you enter the unique URL. I assumed this was being done to give the impression of an increase in the Tele’s paltry online numbers.