BMW conspiracy. There’s been a bit of talk on social media asking questions about why Tony Abbott is apparently going to switch his armoured cars from Holden to BMW — while his daughter has an association with BMW.

The story is that the PM is reported to be ditching his nine high-security Holden limos for a fleet of bomb- and gas-proof BMWs. Poor old Holden can’t take a trick. Abbott said Holden had not even submitted a bid for the tender, but Fairfax reckons the company did — and the bid was well-viewed under the previous Labor government. Abbott’s critics claim opting for BMW was all part of discrediting Holden around the time it announced it would cease Australian operations.

Enter social media, and Bridget Abbott. Yes, she was a “brand ambassador” for the BMW Sydney Carnival last year (that’s a series of horse races held in autumn each year, for non-horsey readers). At the time she was 19 and posed in frocks with horses — you know the drill (here she is in orange). But the Australian Turf Club confirmed to us this morning that Bridget was not associated with the carnival this year, and won’t be next year.

Crikey’s verdict? It seems pretty unlikely that Tony Abbott picked a company to make him some expensive bomb-proof cars because that company was tangentially involved in his daughter’s nascent modelling career. But our social media conspiracy theorists are doing the right thing in keeping track of family connections and expensive tenders.

Light-fingered flunkey? Has a certain media adviser to a senior pollie previously “pled guilty to theft and pawning of a watch”? (No, the tip doesn’t appear to date from the 1790, when this kind of thing was more common among us convict types.) We’ve looked around and can’t find any evidence of this alleged crime. Can anyone send us proof?

“My spies working at Latrobe University (PhDs and the like in biological fields) told me that they had had a special two-day seminar on writing grant applications (which sounds to me like a serious interruption to teaching and research but these things happen). They told me that they were repeatedly instructed that on no account should they use the expressions ‘climate change’ or ‘global warming’ in their applications, because this would lead to instant rejection. However it was possible that reference to ‘cataclysmic weather events’ might pass muster. God help higher education if the present or any Commonwealth government gets full control of universities.”

Have any other academic types been told this? Email us here. If we have a government that won’t fund research on climate change, God help us indeed.

Bettles sent us this take on the result:

“I think my election on the committee is a clear demonstration of the complete lack of intellectual grunt in the Canberra press gallery and that point can be clearly demonstrated by the fact many people voted for me, after reading Crikey’s reporting of my campaign platform. Now that I’ve been elected, I’m considering resigning at the first meeting, maybe even beforehand, after a 17-minute, Jerry Maguire-style speech, where I’ll declare my mission statement for the future of independent journalism, then make it someone else’s responsibility to implement. I plan to nominate Hugh Riminton to carry forward this implementation responsibility, using consultation provided by former WA Liberal MP Wilson Tuckey.”

The committee, whose most important task is organising the press gallery’s wild Mid-Winter Ball, is presided over by ever-sensible Sky News anchor David Speers.

Gillard on education. The former PM has just released five short vids talking about global education as part of her work with The Brookings Institution, a US-based public policy think tank. She’s focusing on how girls in the developing world can better access education. Click on the image below to watch the videos (oh, and according to Random House, Gillard’s book is on track to be out next October). 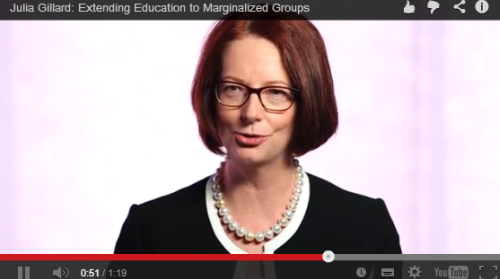 Two injured, one killed: the new Takata airbag threat that fell between the cracks