The current United States Congress has passed the fewest laws of any Congress in history. US-based freelance writer Andrew Murfett looks at where it all went wrong. 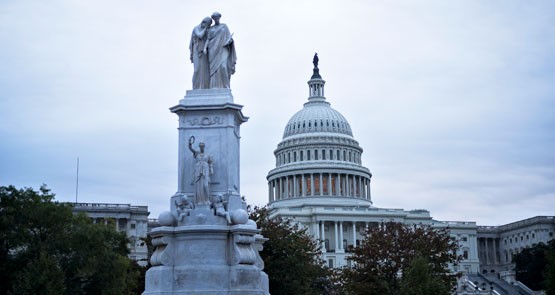 It is a bastion of pettiness and inefficiency, an institution as unpopular as almost any other in the United States — it has certainly been some year for Congress.

There’s the partisan gridlock, the trifling disputes among members, the sluggish pace of approving political appointments and the old-fashioned but ultimately meaningless traditions. Even the most ardent defenders of Congress — which encompasses the Democratic-controlled Senate and the Republican-controlled House — are mostly aghast.

Yet over the weekend, there was some all-too-rare cause for a little optimism. There is finally agreement on a bipartisan budget bill; it has been passed by the House and appears highly likely to get through the Senate this week.

Not only will its passage ensure there are no more shutdowns in the next couple of years, it suggests that if Republicans and Democrats can sit down together, compromise may still actually be possible. Naturally, far-Right Tea Party-affiliated senators are up in arms, but we will come back to them in a moment.

As it enters its final week of sitting this afternoon Australian time, this year’s Congress stands as the least productive of all time. It has passed just 55 laws for 2013 — the lowest annual total ever. Tellingly, the next all-time worst performer is last year’s Congress, which passed 62 laws.

With much of Congress now a patchwork of gerrymandered seats encompassing districts that have been constructed by design to stay within the hands of their party, members have paid the price by having to engage heavily with the more extreme elements of their parties.

The most notable example of this was obviously October’s expensive and unnecessary government shutdown. Fomented by Tea Party-affiliated members and their hatred of President Barack Obama’s Affordable Care Act (or Obamacare), the shutdown did nothing more than globally embarrass the American business community, temporarily stall economic growth, build the profile of would-be 2016 presidential candidates and inconvenience several million government employees.

Another fundamental problem with the congressional system right now is a nearly perpetual election cycle. With the primary races beginning earlier in the term and the spending required in each seat dramatically rising, lawmakers are forced to embark on ludicrous fundraising schedules.

According to The New York Times, members of Congress are spending significantly less time in Washington and fewer days casting votes on the floor.

This year Republicans have constantly used the once-radical tactic of filibusting the approval process of even the most mundane presidential appointees. Last month, the Democrats eventually made a change to rules that limited the power of the filibuster. That only infuriated the Republicans more.

The big-picture issues framing the short- to medium-term fortunes of the nation such as the massive illegal immigration population, gun control, the flailing nature of the country’s infrastructure, farming bills, the Keystone XL oil pipeline, the ticking time bomb of Guantanamo Bay and a much-needed tax code overhaul all sit in limbo thanks to congressional inaction.

“We owe the American people more than we’ve been giving.”

Democrats are openly suggesting Republicans, driven by the Tea Party faction, are “governing by press release“. They point to a raft of legislative measures on hot-button issues such as healthcare, government oversight powers and abortion that will ultimately go nowhere but demonstrate to their base they are being proactive in issues that matter to them.

“It speaks to the larger dysfunction in Washington right now,” Charlie Dent, a Republican of Pennsylvania, told the Times. “Washington is largely broken.”

That’s why the new bipartisan budget accord bill is seen as being a positive step forward. The deal, negotiated by Republican House Budget Committee chairman Paul Ryan and Democratic Senator Patty Murray, eases military spending cuts, raises spending slightly this year and next but cuts the deficit over 10 years.

Republican House Speaker John Boehner, criticised frequently through October’s shutdown for not standing up to his party’s extremists, hailed it as a truce and denounced groups from his own side of politics who attempted to halt it.

Boehner’s party has been rigidly disciplined — in many ways reminiscent of the Liberal Party’s dogged pursuit of former prime minister Julia Gillard — in attacking Obama’s healthcare law. But this new budget debate, which is playing out in public, is threatening to derail the scare campaign and reduce its negative impact.

Boehner was positively livid on the weekend, declaring war on outside conservative groups. “Are you kidding me?” he bellowed in denouncing the opposition to the truce. “There comes a point where people step over the line. When you criticise something and you have no idea what you’re criticising, it undermines your credibility.”

He could have been talking to any number of his own party members including Rand Paul and Fox News dial-a-quote scaremonger and 2016 hopeful Marco Rubio, who first denounced the deal without even reading the details of it. “They are not fighting for conservative policy,” Boehner said. “They are fighting to expand their lists, raise more money and grow their organisations.”

Asked about the ramifications of his outburst, a frosty Boehner, long tepid in pressing the far-Right, was direct: “I don’t care what they do.”

The Tea Party faction is also working to fight US involvement in major trade pacts, including one close to Australia, the 12-country Trans-Pacific deal. Their issues centre on the leg-up to Japan’s auto industry and with that the threat to US jobs that may come with the agreement.

For their part, many Democrats are also unhappy with the budget. They believe they have given too much ground again to the other side, though the threat of another shutdown is too severe for an internal revolt.

One concern for both parties is that the budget, even if it passes the Senate, does not address the debt-ceiling issue. The prevailing attitude seems to be: that is next year’s problem. Hmmm.

As congressional lawmakers began to think about heading home for Christmas, the Republican from Oklahoma Tom Cole perhaps summed it up best. “We owe the American people more than we’ve been giving,” he said.

I don’t like what I’ve heard of the Trans-Pacific Trade Pact either. Eucalyptus tea anyone ?

This one hasn’t warmed up yet?

If the Teabaggers oppose the TPP I am worried that it might be OK. Nah, not really, look how wrong Perot was about the FTA with Canada & Mexico…oh.