Joe Hockey has drawn a line under the Labor era and set the new government an enormous task to bring the budget back into surplus with the release of mid-year economic outlook figures. 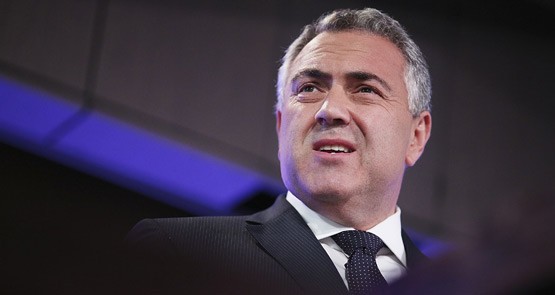 The Abbott government’s first Mid-Year Economic and Fiscal Outlook has been released today, and features a $16.8 billion budget blowout driven by a weaker economy and spending decisions.

Across the forward estimates, the government will rack up $123 billion in deficits, and it has given up on the PEFO projection of a small surplus in 2016-17; instead, there will be double-digit billion-dollar deficits for the next four years. This year will see a blowout of nearly $11 billion in additional spending, the bulk of it Treasurer Joe Hockey’s handout of nearly $9 billion to the Reserve Bank.

The biggest cuts to revenue have come not from lower company tax, for once, but from forecast lower income tax receipts, which will cost over $3 billion, lower superannuation tax returns, and yet another writedown of the mining tax.

A comparison of the forecasts and estimates from August’s Pre-Election Economic and Fiscal Outlook, prepared independently during the caretaker period by Treasury and Finance, reveals the extent to which Hockey has presided over a dramatic writedown both of revenue and expected economic performance in 2013-14 and 2014-15:

The key reason why Treasurer Joe Hockey has presided over a massive blowout in expected deficits over the next four years has nothing to do with Labor, and very little to do with his own spending — which admittedly has gone up nearly $11 billion this year in just 100 days.

No, the key reason is that forecasts for nominal GDP growth have been revised down, and revised down a lot.

In the Pre-Election Economic and Fiscal Outlook released by Treasury and Finance in August, untouched by political hands, budget deficits were expected to total about $55 billion over the next four years, with a small, almost notional, surplus in 2016-17. That’s now turned into $123 billion worth of deficits under Hockey. And nominal GDP growth forecasts have also changed dramatically. In PEFO, they were 3.75%, 4.5%, 5.25% and 5.25% for this year through to 2016-17. Now nominal GDP is forecast to be 3.5%, 3.5% 4.75% and 4.75% for the same years. They are the lowest nominal GDP forecasts since the global financial crisis.

In comparison, even including this year’s nearly $11 billion blowout, spending is only forecast to rise $20 billion in total beyond PEFO estimates. The deficit blowout is mostly driven by the government’s own decisions this year, but by downward revenue revisions in later years.

Nominal GDP isn’t the only area where Treasury has dramatically lowered expectations. Household consumption is forecast to grow 0.5 percentage points less than the 2% forecast in PEFO this year and a quarter of a percent lower next year. Housing construction is expected to grow by only 3% rather than 5% as forecast in August, although the forecast for next year remains unchanged. Flat business investment this year is now predicted to be negative, and a small fall in investment next year is now a larger one; ditto machinery and equipment investment this year, although it’s expected to grow more strongly next year. Terms of trade are expected now to fall a little less than forecast in August, but a lot more in 2014-15.

That is, in almost every forecast, Treasury has lowered its forecasts, often dramatically, for the performance of the Australian economy — except, oddly, in unemployment, which is now expected not to reach the 6.25% forecast back in May until 2014-15. Inflation, too, is now forecast to be a little stronger this year than previously expected.

In opposition, Joe Hockey and the Coalition derided the laments of Wayne Swan that Treasury kept writing down revenue on him, making it impossible to return to surplus. They would make sure Treasury offered more pessimistic forecasts, Hockey said, in order to avoid downside surprises on revenue.

That’s one interpretation of this MYEFO: that Hockey has demanded Treasury slash its forecasts and give him the worst-case scenario for revenue.

Another is that Hockey has insisted on the worst possible forecasts in order to blame Labor for the mess he inherited, and set a low bar to get over when reality turns out to be better than expected. It’s much easier to conjure stronger growth and a better budget outcome if you’ve forecast a looming disaster.

That’s a smart political strategy, but there’s one significant danger. Consumers may hear Hockey’s warnings of impending fiscal chaos and react by pulling their heads in even further, with household savings already at or near record highs. The downward revisions in household consumption could become a self-fulfilling prophecy, with knock-on effects on retail, in particular (one of the biggest-employing sectors of the economy).

It might be better for all of us if Australians are too preoccupied with Christmas and the cricket to pay much attention.

“The Abbott government’s first Mid-Year Economic and Fiscal Outlook has been released today, and features a $16.8 billion budget blowout driven by a weaker economy and spending decisions.” Yeah sounds like it was the ALP’s fault to me!
And we haven’t yet got to scrapping the carbon and mining taxes while shelling out billions for direct action and the PPL!

Watched the Hockey/Cormann press conference & was even less impressed than expected.

Notably, Hockey didn’t answer Mark Kenny’s question about whether the RBA requested the extra $9Billion amd whether Hockey had the letter to prove it. Instead we heard bluster about the low level of RBA reserves which had occurred under the Labor govt blah blah blah…

Notice how Abbott & Co won’t talk about themselves, they swing off on a tangent to criticise the former govt rather than clarify their own policies.

Even News Ltd David Crowe today ascribes $18.7 bn of spending/outlay decisions on the Coalition in their 100 days in power.

The $9B to the RBA is neither here nor there. Although it will appear in the accounts, it hasn’t left Australia, it’s just a transfer of funds.

But the rest, ha, apart from being Labor’s fault from time immemorial, is largely about world conditions as much as local conditions, and the coalition blamed Labor for that, so they can take the blame for it now that they are in government.

Re dogs breakfast – couldn’t agree more. This government as opposition wrote the rules on negative, simplistic, cynical politics but don’t seem to like it when the tables are turned on them.