Fairfax editorial boss Garry Linnell is taking on a permanent radio hosting gig next year. That and other media tidbits.

Fairfax radio moves: Linnell v Jones in 2014. Garry Linnell, Fairfax’s director of news media, is taking on a permanent radio hosting gig next year on top of his management duties. Linnell — the ultimate editorial supremo of The Age, The Sydney Morning Herald and The Canberra Times— will co-host 2UE’s breakfast shift with John Stanley, pitting the pair against 2GB talkback king Alan Jones. While some Fairfax staff were grumbling about their boss taking on two demanding jobs at once, Fairfax spruiked the unorthodox move as “the ultimate cross-company and cross-platform appointment”. Besides filling in for Stanley on Your Business Day this year, Linnell, a former Daily Telegraph editor and Channel Nine news boss, is a newcomer to radio. In a statement, Fairfax CEO Greg Hywood said:

“The first time I heard Garry on 2UE I knew it was only a matter of time before he became a more permanent part of 2UE’s line-up. Garry is a natural and has taken to the world of radio like the proverbial duck takes to the big pond that is our new multi-media world. We tell our journalists that we want them to be more and more comfortable across all forms of media. Well Garry is certainly taking a leadership position on it.”

Fairfax-owned 2UE has wallowed in the Sydney radio ratings for several years, trailing rival 2GB. Linnell will continue as director of news media until Easter, when the arrangement will be reviewed. Until then, former Australian Financial Review editor Glenn Burge will take on some of Linnell’s duties including overseeing Fairfax’s Brisbane and Perth websites and liaising with the Australian Press Council. 2UE has overhauled its line-up for 2014 with former ABC presenter Angela Catterns joining the station as mornings host and current breakfast hosts Ian “Dicko” Dickson and Sarah Morice moving to the afternoons slot. Justin Smith, a long-time producer and full-in host for 3AW’s Neil Mitchell, moves north to take the drive slot on UE. — Matthew Knott

Leak: I didn’t insult Holden workers. The Australian‘s cartoonist Bill Leak has defended a cartoon depicting Holden union representatives as whingers and bludgers, saying it was not insensitive to Holden workers. Labor senator Doug Cameron and Australian Council of Trade Unions secretary Dave Oliver have both blasted the cartoon. Leak told Crikey: “I explicitly labelled the characters ‘AMWU Reps’ in order to suggest the unions are, to a great extent, responsible for the job losses of the workers whose interests they claim to represent.

“That some people have misinterpreted the cartoon, deliberately or otherwise, and have chosen to attack me  for something I quite consciously avoided (in this case, being seen as ‘insensitive to Holden workers’) doesn’t surprise me because I accept that people will always see what they want to see and read what they want to read into political commentary of all kinds, cartoons included.” — Matthew Knott

Oh yeah, it’s all Labor’s fault. The Daily Telegraph has had it up to its eyes with the Labor government … and never mind that Labor is now in opposition. First up it’s “Labor’s debt bomb” on the front page, with an artfully photoshopped image of former prime ministers Kevin Rudd and Julia Gillard and former treasurer Wayne Swan …

Then on page 13, Peter Costello wants to make sure everyone understands exactly who is to blame for Holden’s closure — Labor. He says Labor wants to “rewrite history” — is that a road the Howard government treasurer really wants to go down?

Ireland, post bailout. Ireland was the first country to exit the European Union’s official bailout program on Sunday, with the economy showing some glimmers of improvement. Greece, Portugal, Spain and Italy will be keeping a close eye on how the Irish economy fares without International Monetary Fund and EU money propping it up. Irish radio station Newstalk asked its listeners to sum up the mood in the country post-bailout in one word, and it has compiled their answers into a word cloud. Seems not everyone is optimistic that there will be a pot o’ gold at the end of this particular rainbow … 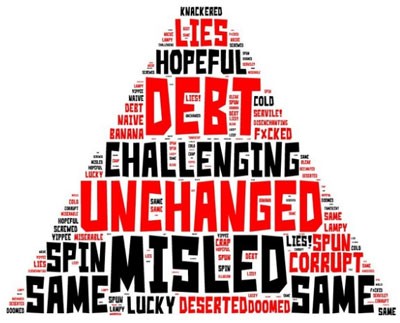 You do have to be Einstein. It’s a shame nobody at The West Australian does … 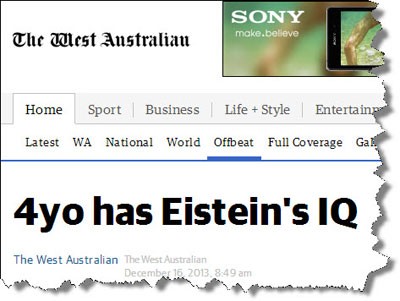 Video of the day. We like this Miley Cyrus-inspired summary doing the rounds of social media of the Abbott government’s first days in office …

Now the news … and an ad: 2UE tests radio rules

Mr Smug – how do you get to “rewrite history” if not through being granted access to do it, by some media behemoth, while the editors keep alternate opinion to a minimum?

…. (that cartoon) think what Abbott could do with two?

And can’t joke take a Leak?

You’re righ,t Bill Leak. How to illustrate the long and complex reasons for Holdens demise was never going to be an easy ask. Hey…. what about fat lazy selfish union reps? Everyone in the editorial room at The Australian thought it was a kak. Funny how GM rarley ever mentions this as a reason for closure. Maybe they had something to do with it? Naaaah… stupid, ugly, lazy Union Reps, should do it.