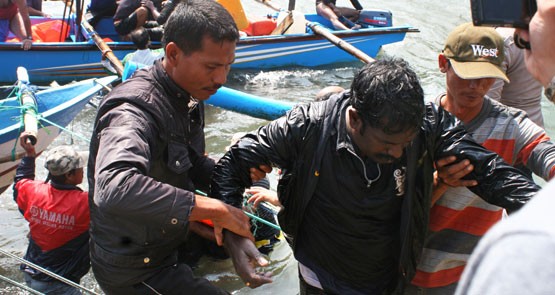 Since the institution of Operation RELEX in 2001, in which the federal government decided to make a concerted effort to locate and interdict boats containing asylum seekers on their way to Australia, the media has had a field day. Up to this point we mounted sporadic efforts to find these boat people — often unsuccessfully. Thereafter the statistics on boat arrivals have varied significantly, but analysis should be telling us that there is almost no chance that desperate people will give up the effort to get to Australia by whatever means they can.

In July 2011, Dr Timothy J. Hatton of the Australian National University and the University of Essex delivered a paper on this subject to the Centre for Economic Policy Research in London. In 155 pages, Asylum Seeking: Trends and Policies in the OECD dissects the available data and looks at where we should go next. It concludes with the rather obvious points that something needs to be done. Hatton’s recommendations, inter alia, are:

“We need to consider making the present UN convention more relevant to modern requirements. This may mean a totally new convention or radical changes to present convention. Either way, though, this becomes just another wicked problem to be solved and I see little heart in the leadership of the international community to do much about it right now.”

Hatton proposes the adoption of a new model for getting more acceptable outcomes, and this model ought to be explored in detail for its application to today’s circumstances.

My own opinion is that we need to address the core issues with a far-sighted view of the future — not one driven by the current election cycles. It is likely that the population burden of the planet will increase by over 30% in the next four decades and bring huge shifts in the demographic make-up of the various communities that inhabit the globe. So the apparently intractable problems we are trying to solve today will only become more intractable if we do nothing about them, and these problems have the potential to bring serious security consequences with them if left unresolved.

I also want to offer a few remarks about my practical experience of the 2001 effort and make a few observations about the way in which the government made its decisions.

Against a climate of very high security concerns before and after 9/11, the Australian government saw Australia as confronted by a low-level threat to its security over which the government was apparently able to exert much control. I think ministers were concerned about the public’s perception of their leadership capabilities if matters were not taken in hand. This perception became an important driver for something to be done.

In implementing our operations in 2001 the principle that no one should lose their life in the conduct of operations was paramount. This principle was critical to providing Australian Defence Force personnel with the moral authority from which to operate in these very difficult situations. It also reflected the position that asylum seekers should not be construed as the “enemy” in any way.

While conducting operations such as RELEX we recognised that these commitments would be a diversion from normal types of Defence Force war-fighting operations, and certainly in the post 9/11 climate there was plenty of that kind of work to be done. But the conduct of detection and interdiction operations like RELEX represented classic maritime operations that were carried out over centuries.

“… my assessment is that little has changed in the regional dynamics for preventing people smuggling.”

Concomitantly, what did concern me about a campaign to combat people smuggling operations specifically was the apparent lack of a serious countervailing strategy to take their business away. We seemed focused only on enforcement and control to solve this problem, rather than finding an offsetting strategy that would put these criminals out of business. While I do know that the intake of processed immigrants was lifted as part of the deal at the time, I think little was done to give special help to those people who were desperate to get out of terrible situations in their homelands.

The Defence Force personnel that I commanded in 2001 and 2002 did a fantastic job in what sometimes turned into very trying circumstances, including the mix and match of operations in the Middle East, East Timor, Diego Garcia and concurrently on Operation RELEX. In my view all the qualities I saw on display in the operation to secure East Timor from militia terror were repeated here — young Australians all doing a fine job in the military supporting Australia’s laws but also going about their duties with a great deal of compassion.

Now that time has moved on, my assessment is that little has changed in the regional dynamics for preventing people smuggling.

In looking at the current situation I wonder just how far we want to go in applying pressure on our near neighbour, Indonesia, to deal effectively with certain measures designed only to resolve Australia’s problem with people smugglers and, consequently, those unfortunate people who want to seek sanctuary in Australia by making hazardous voyages here by unseaworthy boats.

Strategic analysis suggests to me that we should be working hard to try and deliver an effective engagement with Indonesia to enhance Australia’s security over the next few decades. Yet these asylum seeker issues have the potential to remain a significant irritant in the relationship, in the absence of a collaborative effort to deal with the issues on asylum seekers that face both countries. Australia cannot make its asylum seeker solution a problem for other countries in our region.

On this basis I recommend that Australia and Indonesia collaborate on taking forward Hatton’s proposals in the spirit of finding new ways for each country to manage asylum seekers in a more satisfactory way, including taking leadership in review of the international protocols under the present Untied Nations convention and recommending changes where necessary, and taking on a fair share of the burden in dealing with specific cases.

*Admiral (retired) Chris Barrie AC, former chief of the Australian Defence Force, is now an adjunct professor at the Strategic and Defence Studies Centre of the Australian National University. This is an extract from his essay published today by Australia21 in Refugees and asylum seekers: Finding a better way.

Another one, why do all these scabs write about other nations doing the job of caring for refugees while we skive off and do very little.

ASylum seekers are allowed to come here by boat why do they incessantly whinge about it.

Another former warrior offers a solution ! It’s notable that as our troops leave the theatre of Afghanistan, it seems the prospect of under-employment has so worried many senior Defence people that a new front has to be opened in the form of a war against asylum seekers. The Defence Department occupation of the re-coded Department of Immigration and Border Protection is almost complete with the news that a senior military GP rather than the expert IHAG committee made up of Australia’s foremost multi-disciplinary clinicians is henceforth to be the sole advisor on Immigration Detention health issues. The testimony from Major General John Cantwell in Exit Wounds shows only too well the Defence Department’s incapacity to deal with mental health – and the bereft nature of the warrior policies when dealing with human concerns. The military takeover includes the implementation of several secret committees which take no minutes of their meetings and are unaccountable to the Parliament. Apparently the much-favoured sparse decorations in the offices of the new Immigration detention strategists – portraits of Queen Elizabeth 11 and copies of Sun Tzu’s ancient tactical treatise “The Art of War”. Tony Abbott appears to have missed the lessons about compassion and human rights during his recent brief attendance at Nelson Mandela’s Memorial Service.

Could the withdrawal from Afghanistan be used as a cunning Baldrick-type plan for Morriscum to claim that, as we are no longer killing them there, ipso fact peace has returned and they’ve no need to flee? Both the Rodent & Cadaver tried that with Iraq.