White Christmas: the US racial politics of Santa Claus

Some in America dream of a black Christmas, but the notion Santa is anything other than Anglo-Saxon offends the humourless at Fox News. Journalist Hari Raj reports from the US on the latest race controversy.

Poor Fox News. It isn’t easy being the sole bastion of sanity in the cluttered United States media landscape. It’s even harder at the end of the year, at a time when togetherness and tradition are threatened by no less than a War on Christmas. And then some liberal writer proposes that Santa Claus should be replaced. By a penguin.

To catch you up, last week Slate blogger Aisha Harris penned a missive questioning the prevalence of a “melanin-deficient” Santa. For all that it has tongue very firmly planted in cheek, Harris’ piece does an excellent job of walking us through the confusion of a child who was brought up with two versions of Santa — one darker, like her, but limited to the confines of her household, while the other, pinker version was everywhere else.

Substituting Santa with a penguin is patently ridiculous, but the suggestion is enough to make you stop and think about the status quo, and wonder if it always must be so. Food for thought for some; indigestion for Fox News …

“And by the way, for all you kids watching at home, Santa just is white,” asserts host Megyn Kelly. To be fair, the panellists do discuss the heft of Harris’ piece, and Bernard Whitman makes very reasonable points right at the end before Kelly cuts him off. But then it all gets bogged down in a discussion about penguins instead of, you know, an examination of the racial normalisation of an internationally beloved holiday icon.

“Just because it makes you feel uncomfortable doesn’t mean it has to change,” Kelly says. “Jesus was a white man too. He was a historical figure — that’s a verifiable fact. As is Santa. I just want the kids watching to know that.”

The clip has become less of a handy target for vitriol and pitchforks and more a catalyst for general amazement and amusement. There’s also a reliably acerbic Jon Stewart takedown, which starts out by savouring the deliciousness of a Fox News pundit saying “you can’t take facts and change them to fit some sort of a political agenda, or a sensitivity agenda” and ends with a great segment by Jessica Williams, one of the best recent additions to The Daily Show … 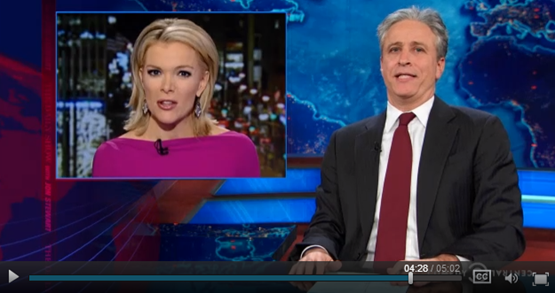 Harris, making an appearance on MSNBC’s All In to discuss the kerfuffle, says the insistence that certain fictional figures must be white speaks to a larger problem: in particular, she references last year’s controversy over the reaction to (book-accurate) depictions of certain characters in the first Hunger Games film.

Most rebuttals to Kelly have pointed out that Saint Nicholas, upon whom Santa Claus is based, hails from what is now Turkey and was probably swarthy of countenance. But while there are different versions of Santa Claus around the world, racial polemics are not limited to the US. In the Netherlands, for example, St. Nicholas — or Sinterklaas — is accompanied by servants known as Black Pete. The character is often portrayed in blackface, and as a buffoon; in January this year the United Nations High Commission for Human Rights wrote to the Dutch government, querying the practice and citing concerns over racism.

Opposition to Black Pete has grown in recent years, but there are also staunch defenders. In The New York Times, an excellent op-ed by Arnon Grunberg discusses the recent controversy as well as the difficulty of changing Dutch traditions that are as cherished as they are problematic.

As for Megyn Kelly, she was just joking, of course. “Humour is part of what we try to bring to this show, but sometimes that is lost on the humourless,” she says in her response to the furore. Kelly also laments “the kneejerk instinct by so many to race-bait”, a tactic otherwise known as the John Howard Defence.

But it is Christmas, so surely forgiveness is in order — after all, debating the ethnicity of Santa is a tremendously tricky proposition. Just ask Dr Huxtable.

WTF?! Kelly says. “Jesus was a white man too. He was a historical figure — that’s a verifiable fact. As is Santa. The mystery is not so much where does Fux find some such cretins but “WHY?”.
Presumably JC was also blonde & blue eyed and spoke amerikan with a southern drawl?

Hmm, Santa’s not real and neither is Jesus… So, just tell the kids the truth. Altruism is a powerful and successful evolutionary asset for many species, not just human.