Pell naps? A reader who attended the memorial service for Nelson Mandela at Sydney’s Pitt St Uniting Church on Friday noticed that fellow attendee George Pell fell asleep. We were pointed to this tweet from @riebeeck7 (Pell is in the centre of the pic): 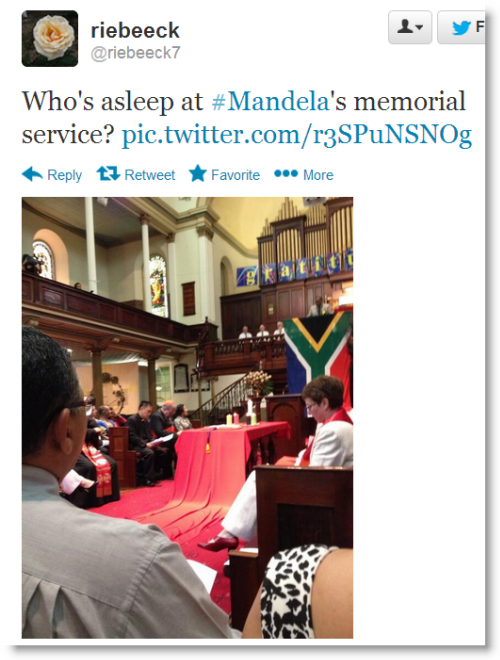 And here’s a close-up of the good cardinal: 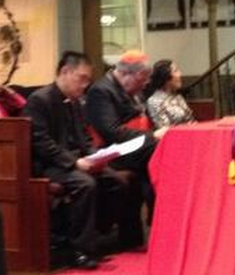 Now, the most senior figure in the Australian Catholic Church could be asleep in this pic. But he could be praying or reading his hymn sheet / program. Or he could be averting his eyes from the female priest, the Rev. Dorothy McRae-McMahon, who presided over the service (Pell is a staunch opponent of female ordination). You be the judge. All we can say is that NSW Governor Marie Bashir, sitting next to Pell, looks a little more alert.

Airline chiefs spotted. As tireless Crikey aviation guru Ben Sandilands told us, Brindabella Airlines suspended all operations yesterday, with receivers appointed to the troubled regional airline. Great news if you’re booked to fly back to your bush home for Christmas. A little mole told us this yesterday: “Brindabella’s senior management have not left the country. I saw them last night hosting this staff Christmas party!” A party — or a wake? No reason not to tell the bosses exactly what you think of them once KordaMentha have been called in. Other work Christmas party gossip is more than welcome at Tips.

Fairfax movements. Chris Hammer, a former Fairfax reporter, is back with the company and has just been promoted to online political editor. The amicable Hammer used to report on matters environmental for The Age in the press gallery, then left to write a book on the Murray-Darling, called The River. He’s been back with Fairfax for about 18 months and now gets a promotion. Hammer replaces the well-regarded veteran Tim Lester, who’s going to Channel 7.

A truly Nile event. Passionate anti-gay-marriage campaigner Fred Nile got married over the weekend, to a woman 24 years younger whom he met at a Christian Democratic Party meeting. The SMH says he decided to tie the knot in celebration of the defeat of a same-sex marriage bill in NSW (where he’s an MP). Lovely. This invitee was not impressed:

“I was invited to Fred Nile’s wedding and will not be attending because of his stance on many issues, not the least of which is his opposition to the marriage of same-sex couples. On the invitation there is a section where the invited person can access the David Jones website to select a present! My wife and I will be donating money to the victims of the Philippines disaster and Fred will have to buy his own toaster. Better wed than Fred.”

Indeed, the happy couple’s gift registry at DJs is online and available for all to peruse. You can celebrate the occasion by buying them a Laura Ashley cushion in raspberry, four different oven mitts, something called a “dion sham” in buff, a $349 fan, some Bribie beach paddles for a little newlywed hanky panky, or a cute console table at $7625. But really, who buys a toilet brush holder as a wedding present?

Here are some of our fave items: 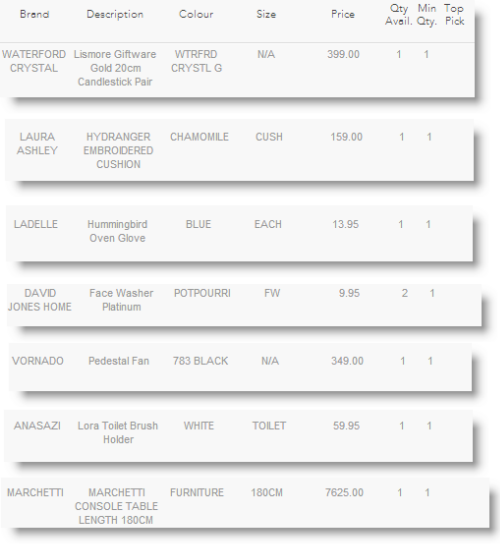 Press gallery committee race. It’s polling day for Canberra’s press gallery committee, and Ten’s Hugh Riminton will take on News’ Gary Ramage, the ever-present Mike Keating, Fairfax scribe Colin Bettles, Achim Bormann from Ten and Lauren Gianoli from Nine (there are four spots up for grabs). The current committee has the same number of women as federal cabinet (sigh). We enjoyed the pitch from Fairfax’s Colin Bettles — here’s an excerpt:

As a candidate for the press gallery committee, I’d like to outline my election platform and say who I am …

* If I am elected as your press gallery committee representative, I pledge to adhere to a new personally abrasive style marked by chaos and dysfunction, based on lessons learned from my previous committee experiences — think of me, think Gordon Ramsay.
* I would commit to attending meetings now and then, depending on work-load and social commitments or general mood and energy levels (including hangovers).

Best of luck to Colin. 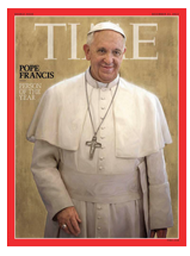 Polling for Crikey’s choice opened on Friday, and with more than 1400 votes cast, Pope Frank is performing strongly. But he’s struggling to catch fellow nominee Peter Fox, whistleblower on child sex abuse by the clergy. Meanwhile, in the crucial Arsehat of the Year category, votes are scattered across our nominees — but interestingly, very few of you have opted for twerkers Clive Palmer and Miley Cyrus. Read our nominees for both categories here, and vote here. You’ve got until noon on Thursday to have your voice heard.

Nice to see Rev. Nile living up to the teachings of Jesus.