The 20-minute neighbourhood: great idea but will never work

The draft metropolitan planning strategy released earlier this year for Melbourne proposes a city made up of “20-minute neighbourhoods”. As the diagram shows (above), the idea is that every home will be within 20 minutes of active travel (i.e. public transport, walking and cycling) of jobs, shops, cafes, schools, parks and community facilities. It’s certainly […] 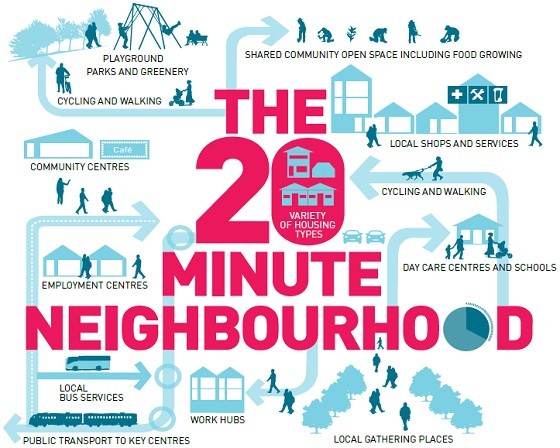 The draft metropolitan planning strategy released earlier this year for Melbourne proposes a city made up of “20-minute neighbourhoods”. As the diagram shows (above), the idea is that every home will be within 20 minutes of active travel (i.e. public transport, walking and cycling) of jobs, shops, cafes, schools, parks and community facilities.

Who wouldn’t want to have local services within an easy walk? And residents would still retain the option of driving! It seems there are no losers here, only winners.

Is it too good to be true? There are a number of issues I’d like to see explored first before I’d be convinced this is the clear and obvious winner Plan Melbourne would have me believe it is.

Google Maps tells me I can cycle to my nearest supermarket in seven minutes, which is reasonably competitive with driving (four minutes). It says it’ll take me 20 minutes to walk. It won’t give me an answer for public transport, but I can see it’d take longer.

Which mode is the limiting bound? If it’s cycling, we’ve pretty much got 20-minute neighbourhoods already. A cyclist can travel five kilometres in 20 minutes, which yields a radius of almost 80 square kilometres. If it’s public transport, then in many suburbs 20 minutes will be far too restrictive. The attractiveness of public transport for short trips is limited because walk and wait times make up a relatively large part of the overall travel time.

Public transport would make even less sense for local 20-minute trips if the high-frequency “turn up and go” grid-based system that’s commonly advocated (like this) is assumed. A 10-minute frequency means an average five-minute wait to board and, if required, to transfer.

In addition, public transport evolved to serve the CBD; it isn’t set up as a series of small-scale “hub and spoke” systems serving each neighbourhood centre or local facility, nor should it be.

While cycling will be an attractive option for some people, walking must be the default active mode because it’s the only one that will suit the majority of travellers. But after allowing for differences in factors like age and topography, walking implies all the nominated services and facilities would need to be located within one to one-and-a-half kilometres of each home, i.e. a radius of three to seven square kilometres.

Even assuming services and facilities could be retro-fitted in the suburbs to provide the full-service neighbourhood centres envisaged in Plan Melbourne, the optimal spacing is not the same for all services and facilities. They don’t all fit neatly within a 20-minute access time. Users are also prepared to travel further for some than others; indeed some actively prefer the more distant option, e.g. private schools.

Nor can all activities be co-located easily; for example, many existing primary schools are not part of neighbourhood centres. The task of giving each dwelling access to at least two (and very possibly more) geographically separate local destinations within the 20-minute time frame would be extraordinarily hard.