A cartoon by The Australian's Bill Leak lampooning Holden workers has angered leading labour figures. That and other media tidbits.

Lefties lash Leak. Leading labour movement figures have slammed The Australian‘s Bill Leak for a cartoon depicting Holden union representatives as whingers and bludgers. The Friday cartoon, published the day after Holden announced it would stop making cars in Australia in 2017, has drawn the ire of Labor Senator Doug Cameron and Australian Council of Trade Unions boss Dave Oliver. In a letter to the editor, Cameron said: “I am compelled to register my disgust at the demonization of ordinary people in your cartoon today.”

“Given my experience with AMWU delegates, I know they will not be bullied or intimidated by the Murdoch press. Workers at Holden have done nothing to deserve the wrath of The Australian except to act collectively in seeking decent wages and conditions and to advance the interests of the Australian automotive industry. This cartoon is a new low even by The Australian‘s standards.”

Dave Oliver, also a former AMWU boss, wrote to Leak directly to say: “Your cartoon is a hurtful and unfounded attack on people already facing difficult circumstances. A little solidarity with your fellow Australians would have been a more thoughtful response.” Leak did not respond to Crikey‘s request for comment this morning — Matthew Knott

Video of the day. There are lots of clips we could point to in celebration of the life of legendary actor Peter O’Toole, who died overnight at the age of 81. But this spot on David Letterman’s Late Show from 1995 — where he arrives on a camel before smoking his way through an entertaining look back at his life — is a pretty good start.

Front page of the day. Protesters in Kiev were out in force over the weekend to push for Ukraine’s admission to the European Union. Local Russian-language tabloid Komsomolskaya Pravda splashed with the violence today … 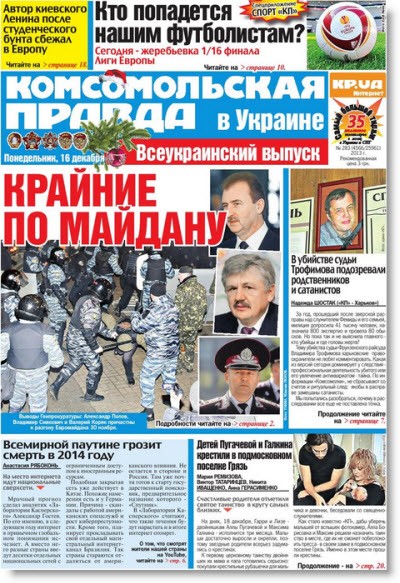 Bill Leak – you really are the dregs. Never done an honest day’s work in your life. Just draw nasty pictures. That bump on the head you experienced a few years ago has left you brain-damaged.
Give it up before you lose all credibility!

Bill Leak seems(sadly) headed for “Pickering” status.
A pity, because he’s actually not a bad portrait painter.
Perhaps he should stick to that.

“Will Leak for Murdoch”?

Perhaps Bill Leak would prefer Holden workers to be like the hapless McDonald’s and Walmart workers in the USA on the minimum wage of US$7.25 per hour (as reported in Friday’s Crikey). That’s the rate a nation consisting of only 11% of workers in unions can boast.

Paddy is spot on with the comment re Pickering.