Crikey Awards: in a year of incompetence, Abbott was the best

It's been a Melbourne Cup field for incompetence this year in politics, but Crikey has spotted those who have managed to stand out from the pack. None more than the Prime Minister. 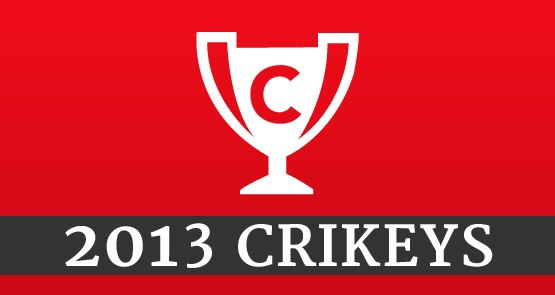 Most years, deciding which frontbenchers have performed best and worst isn’t too difficult. But 2013 poses particular problems, not merely because there’s been both numerous reshuffles and a change of government, but because the new government has stumbled badly since getting into office, meaning there’s a Melbourne Cup field of incompetence to choose from — either from Labor, which lost office, or from the Coalition, which has made every post a loser in its first 100 days. But here goes …

Jenny Macklin’s success in establishing the National Disability Insurance Scheme, complete with partial funding from a tax increase, is one of the few uncontested legacies of the Gillard government, even if the Abbott government is making noises about reducing funding. After three years of bitter and febrile partisanship, that there was a major policy initiative that Tony Abbott scrambled desperately to declare his support for was remarkable, and Macklin, its co-author along with her prime minister, deserves credit in a period when few colleagues on either side distinguished themselves.

Special mentions: Joe Hockey — he worked out that he had to abandon his commitment to return immediately to surplus in favour of actual economic management, and led the way against more handouts to Detroit. But he also got rolled on GrainCorp and flagrantly breached the Charter of Budget Honesty. And Chris Bowen — copped it sweet and walked in March after the abortive Rudd challenge, then returned for a brief stint as treasurer to produce some quality savings, before doing an excellent job as interim leader post-election.

History will record Greg Hunt as a blackly humorous footnote, a symbol of everything that was screwed up about the political and economic systems that led to massive climate change. An alleged believer in the science and a proponent of action to address it, Hunt’s first three months have been dedicated — unsuccessfully — to removing an effective, functional carbon pricing scheme, lying about its impacts and failing to do anything to advance his ludicrous Direct Action scheme, a policy he has had since January 2010 and on which he appears to have done precisely no work during that entire time. As Santa preps the sleigh for take off, we’re still waiting for his green paper on Direct Action, while Hunt’s own climate action budget has already been slashed, and the PM declared that even if Direct Action fails to achieve the bipartisan 5% emissions reduction target there will be no additional funding for it. Throw in approving sludge dumping near the Great Barrier Reef and the review of the Renewable Energy Target that is likely to see Hunt rolled by RET opponents and his stint as minister looms as disastrous.

Dishonourable mentions: Christopher Pyne — a near-run thing, Pyne’s Gonski debacle inflicted huge damage on the government, and established a dud policy as well. And Bob Carr — far from being the astute party elder he promised to be, Carr treated voters with contempt, treated taxpayers as mugs and managed to embroil himself in US politics. Good riddance.

Regarded with ill-disguised contempt by much of the tech press, Turnbull still managed to nullify the electoral positive that the National Broadband Network was for Labor through a combination of attacks on its roll-out delays, an invented claim about a massive cost blowout (alas, later rejected even by his own hand-picked review panel) and his own policy that, for the first time, saw the Coalition finally accept the need for a government role in broadband networks. In government, of course, it didn’t work out so neatly — Turnbull has been forced to abandon his promises and the nightmare of the government acquiring Telstra’s mess of a copper network remains, but winners are grinners.

“Abbott has consistently demonstrated a capacity to adapt his political tactics to changing circumstances.”

An early call, sure, and she may well improve with time, but having been gifted Pyne’s Gonski debacle, Ellis struggled to inflict any parliamentary damage on the government. Fortunately for Labor the stuff-up was of such a magnitude that voters couldn’t help but notice, but education will be a key battleground over the next three years and Labor desperately needs an adroit and effective shadow.

Mentioned in dispatches: serial contender Peter “the invisible man” Dutton, a man for whom “failed to trouble the scorers” is a lifetime appellation.

An easy pick, to be sure, but the Coalition’s return to government means Turnbull gets to hold forth regularly at the dispatch box and demonstrate that a modicum of wit and intelligence goes a long way, particularly when contrasted with the poor rhetorical styles of both Abbott and Bill Shorten. His attacks on Labor over the NBN are already the highlight of Abbott-era question times.

Special mention to Julia Gillard for March 21, when she walked into question time after Simon Crean had tried to initiate a Rudd challenge and coolly declared: “For the information of the House, I have determined that there will be a ballot for the leadership and deputy leadership of the Labor Party at 4.30 today. In the meantime, take your best shot.” Coolness under extreme pressure was her forté.

Precisely what Kevin Rudd spent his time doing on the backbench up until June 2013 is a mystery, because it wasn’t spent developing any policies that might have been used to kickstart his prime ministership, beyond moving more quickly to a floating carbon price. In the pressures of an election campaign, during which even well-grounded politicians feel the urge to improvise, this meant Rudd became prone to some of the crassest policy free-forming from Labor in years, embracing economic nationalism, relocating major naval facilities and contemplating a northern Australia economic zone with differential tax rates. A policy disaster. Still, selfies.

Politician of the year: Tony Abbott

Well, he did it. He wobbled occasionally, and seemed briefly fazed when Rudd was restored at the last minute, but he held on to achieve a huge victory for his party and return it to power after just six years in opposition. Abbott remained disciplined and focused throughout, always keeping his eyes on the prize, and always displaying a ruthless pragmatism. For an opposition leader who had devoted his entire leadership to ferociously opposing virtually everything proposed by Labor, he ended up going to the election with a host of unity tickets — on Gonski, on the National Disability Insurance Scheme, on the budget, on the GST, on the need for an NBN — all with the intention of shutting down whatever political advantages Labor held over the Coalition. He was never going to take the risk of repeating the mistake of his one-time boss, John Hewson, and losing an unloseable election through ideological rigidity.

The results of this approach have been demonstrated since the election, with cynical backflips, the “discovery” that policies are much more costly than expected and a visible frustration that events refuse to conform to Coalition demands. As a consequence, the Abbott government has already suffered a serious decline in public support.  Be that as it may, however, Abbott has consistently demonstrated a capacity to adapt his political tactics to changing circumstances. It is likely he will return in 2014 a more adept and effective leader. As the last four years have displayed, he’s too good a politician not to.

“a symbol of everything that was screwed up about the political and economic systems that led to massive climate change.”

LOL It’s obviously time you had a holiday Bernard.
I suppose Tony’s got to be the pyrrhic victor this year.
But awarding Abbott politician of the year, is a bit like awarding a goldfish, the prize for leaping the greatest distance out of the fishtank. The poor botoxed numpty appears to be in terminal trouble after a mere 100 days.

BTW Agree with your choice of Greg Hunt. But you’ve short changed him on stuff ups. He also trashed the previous Govts marine park boundaries last Friday at 5.00pm

Poor Mrs Penberthy – you know what this award means don’t you?

Unbelievable rubbish. Paddy, its worse than that; its like giving an ar5e a prize for farting.
The shite joke that is his “political skill” is called “peta credlin”. He has no credibility and no particular skill beyond negativity, destruction and fanatical devotion to the genie with a bottle problem and the church.

I suppose Abbott has been the most talked-about of the Liberal party politicians and they did win the election so perhaps he does deserve the award. I had hoped this would be an amusing piece but sadly it is all too true.