A generation of damaged people government wants to ignore

We're creating a generation of damaged souls out of people who seek asylum. One of the bodies set up to monitor the situation has been scrapped by the Abbott government, writes physician and Doctors for Refugees member Dr Michael Glicksman. 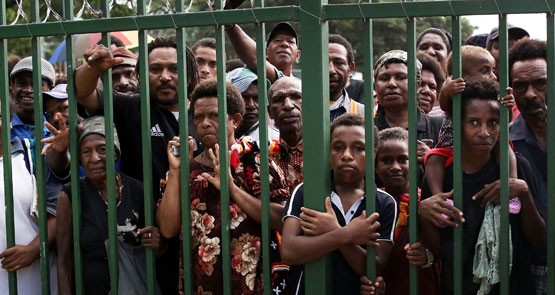 “Silence in the face of evil is itself evil. Not to speak is to speak. Not to act is to act.” — Dietrich Bonhoeffer

In Australia there exists a shameful conjunction between injustice and ill-health involving foreseeable, avoidable and possibly irreparable harm to the most vulnerable of all, the legacy of previous Liberal and Labor governments. I speak of the indefinite detention of people — including children — charged with nothing, guilty of nothing, in Australia’s very own Gulag Archipelago stretching from Christmas Island through our remote deserts and on to malaria-blighted islands to our north.

Some of those children have been there from birth, born in Australia but denied their birth right of citizenship, knowing no crib but one bounded by razor wire, denied the protection of the state’s child protection legislation we all take for granted. Considering the abrogation of Australia’s moral, let alone treaty obligations, it seems we could do no worse.

Today we awoke to the news the Abbott government has decided to axe the Immigration Health Advisory Group, or IHAG, established by the Howard government in 2006 after recommendations made in the Palmer and Comrie inquiries into the handling of the cases of Vivian Alvarez and Cornelia Rau. It was populated by well-regarded medical and other health professionals who gave competent and independent advice to whatever government of the day. Therein, I suspect, lay the problem for a government such as that with which we now find ourselves.

Coming hard on the heels of a highly critical Amnesty International report into conditions at the Manus Island detention facility, it begs the question: what have they to hide? I think we know. So does the Australian Medical Association, hardly a hotbed of left-wing social activism.

New research published in the AMA’s Medical Journal of Australia found substantial unmet health needs and levels of psychiatric morbidity among asylum seekers in immigration detention in Darwin. The poor level of transparency and the lack of independent scrutiny of detainees’ healthcare were of major concern. The conditions in Australia’s offshore facilities, where there is even less (now virtually none) independent medical oversight, are even worse.

The Australian government is obliged, as a signatory of the United Nations Convention Relating to the Status of Refugees, to provide the same standard of healthcare to detainees as is available to the general population. Following the Amnesty report, there is little doubt that we are in breach of that convention.

Suicide is the leading cause of death among detainees in Australia, as one would expect from a policy that leaves people in indefinite detention, unaware of their ultimate fate, in conditions arguably unfit for human habitation. If we were to deliberately design a system so cruel as to entice death, we could do no better.

Is it by design, Mr Abbott? Mr Morrison? Or is it simply the wilful indifference, the turning of the blind eye to which Bonhoeffer referred?

“… it is often the detention environment itself that causes mental illness … Accordingly, it is the removal of people from closed detention that will have the most powerful effect in mitigating mental illness.”

I cannot see her holding her job for much longer under the current government.

Out of sight and largely out of mind, Australia is building a generation of damaged people — almost all of whom, statistics and history show, are entitled to be granted refugee status under our international treaty obligations. In our deserts and on isolated islands, our government is building a legacy to haunt and shame us for generations. We must now consider our response in the light of Bonhoeffer’s declaration, for we too will be held accountable by history.

*Dr Michael Gliksman (@MGliksmanMDPhD) is a physician in private practice in Sydney. He is a member of the federal council of the AMA, a committee member of Doctors for Refugees and a member of the Australian Red Cross International Health Law Committee. The views expressed here are his own.

There is no ‘birth right of citizenship’ in Australia.

Tamas, the milk of human kindness was truly left out of you wasn’t it?

While 1500 refugees have been left to die by our government over the past 15 years 127 million kids under 5 have died of starvation and preventable diseases.

So if a few less drown on the way here so what?

Blind Freddy can see that the situation in the Pacific Island camps/prisons is completely unsustainable, and they are about to explode. When people are treated this badly and put in a hopeless position, good people will do violent things that are completely out of character.
Abbott and Morrison must know this and are simply insulating themselves and the general public about the physical and mental health reality in the camps/prisons.
Wake up Australian Media

Abbott government has decided to axe the Immigration Health Advisory Group. That’s what these former RC altar boys do best. My question what does Mr Pe ll think about this? Maybe Mr pe ll agrees as it seems to be in keeping with RC policy . Basic human rights are for others to maintain …not this gummint.