The minimum wage in the United States is just $7.25 an hour. For a long time that has remained unchanged and undebated -- but the workers are now rising up. 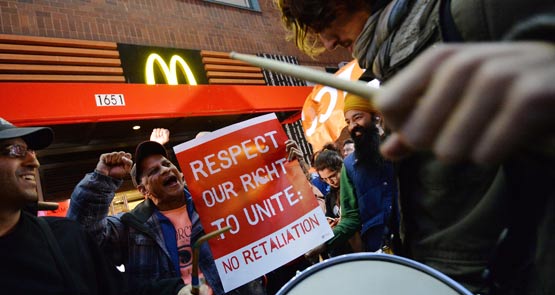 It hasn’t been a great year for McDonald’s in its home market. The fast food goliath has recorded a worrying decline in its American numbers — same-store sales were down almost a full per cent in November. But there’s more angst at the world’s biggest hamburger chain.

Buffeted by trendier, more upscale competitors such as the booming Mexican food outpost Chipotle and the sandwich group Panera Bread, Maccas this year introduced a broad range of new products onto US menu boards. After customer wait times increased and dissatisfaction rose, it quietly scaled back the menu. In October, a Goldman Sachs survey ranked McDonald’s last in a list of 23 fast-food chains in terms of “food quality, healthfulness and customers’ willingness to pay more for the food than is currently charged”.

The group’s biggest misstep, though, was unwittingly becoming poster child for an ascendant movement. In an ill-advised McResource employee portal, it counselled employees to, among other things, break food into smaller pieces to eat less and “still feel full”. It also advised employees to apply for government assistance, get a second job, sing happy songs in trying times and sell unwanted possessions on eBay.

The site was seized on by the advocacy group Low Pay Is Not OK and swiftly went viral. McDonald’s was forced into an embarrassing retreat.

Similarly, Walmart, the largest private employer in the US, raised eyebrows when managers placed bins in employee-only areas last month with irony-free signs reading: “Please Donate Food Items Here, so Associates in Need Can Enjoy Thanksgiving Dinner.” Something is askew when employees at the nation’s biggest retailer cannot afford to feed themselves.

The US minimum wage sits at US$7.25 an hour. Over a 40-hour week, that is just $15,080 annually. New York fast-food workers earn an average yearly salary of $11,000. About 3.6 million people, most with children, attempt to make ends meet on this wage. Most of this vast army of workers relies on public benefits to supplement their low income. (Side note: McDonald’s CEO Don Thompson takes home about $25,000 per day.)

The US is the most fiercely capitalist country in the world. It’s a nation in which union membership sits at just 11%. Unions themselves are traditionally despised by the majority reared on the notion the movement stands for bullying and laziness in the workplace.Yet as the middle class shrinks and wages for most Americans go backwards, there is an unmistakable shift in sentiment occurring. For outsiders here, it has been remarkable to watch.

A job at McDonald’s, once the domain of high school dropouts or ambitious teenagers seeking additional pocket money, can now be a lifeline. Alarmingly, 35 is the average age of Americans earning the minimum wage.

Although the economy is no longer in recession, the benefits of economic recovery are being felt by an increasingly elite few. Some 58% of jobs created in the current recovery are low-wage roles in areas such as fast food and retail.

In response, something remarkable happened back in September on US Labor Day. In 60 cities around the country, staff at more than 1000 fast-food restaurants walked off the job. Their demand: a rise of pay to $15 an hour.

A movement has coalesced around a large, previously voiceless group with the attention of the media and the sympathies of the majority of Americans. Activist and employee advocacy groups are mounting a highly strategic campaign to increase wages of low-paid Americans. One group credited with starting the movement is Fast Food Forward, which began its crusade last year in New York.

In the past 16 years, the US federal minimum wage has risen by just $2.10 an hour. It has not moved at all in four years, although various cities and states have acted independently to raise their population’s hourly rate. Washington state has the highest, at $9.19 per hour. It was in Washington, at Seattle airport, that the campaign scored its biggest victory so far this year, landing a $15 per hour minimum for 6500 airport staff.

Here in Miami, Walmart has been a particular target of protests. On Black Friday, various outlets described one as the largest civil disobedience rallies ever held against the retail giant in Los Angeles. In a particularly poor look, protesters dressed as Santa Claus were handcuffed and arrested. Meanwhile, thousands of fast-food workers again walked off the job around the country last week.

Although employer associations have for years claimed that a rise in minimum wage will reduce staffing levels and increase prices, that view is beginning to wear thin. Many Americans are now grappling with the concept that perhaps paying a little more for a burger and knowing the person serving it to you is being compensated fairly is a fair tariff. One economist study estimates McDonald’s would recover half the cost of a pay increase by upping the price of a Big Mac from $4 to $4.05.

Conservative pundits are even wondering if the $385 billion spent on public benefits would significantly shrink if wages rise. In Florida alone, 115,000 fast food employees rely on benefit programs to feed their families.

The Service Employees International Union is co-ordinating the strikes at outlets and says it will continue until fast-food chains come to the negotiating table.

For his part, President Barack Obama has signalled wage increases as a priority. “Trends since the 1970s have led to a dangerous and growing inequality and lack of upward mobility that has jeopardised middle-class America’s basic bargain — that if you work hard, you have a chance to get ahead,” he said.

The President’s plan is less ambitious than the unions’: up the minimum wage to $10.10 an hour in three stages over two years. Activists say the most likely route to change is the public strong-arming of companies such as McDonald’s. One example gives the unions hope.

Back in June, The New York Times exposed several McDonald’s franchisees as paying staff not into regular bank accounts, but via so-called pre-paid cards in which banks charge employees fees to simply access their money. Employers were offered financial incentives by the banks to steer staff into the scheme. The story was picked up nationally. The next day, the franchisees announced they would end the practice.

When it comes to wages, there is growing recognition, unions say, and a similar nerve has been struck.

In an age of business disruption, McDonald’s isn’t going anywhere

Good luck to them, but I can’t imagine this change occurring without a great deal of angst and bogus rhetoric from the ultra-right. The right of the executive elite to rob workers blind is as entrenched into the American psyche as the right to own assault weapons and 100 round clips.

It is truly depressing that the US model is one that local “conservatives” would like to adopt. I don’t have money problems now but do remember how tough it was when a youth – and that was on a reasonable minimum wage. I have absolutely no problem in paying a bit extra if I thought it went towards lowly paid employees. Even tips in some establishments are being purloined by the owners – the greedy b*stards.

This is what Ms Rine pfart and the Abb lot gommint wants and meant that is good for Australian businesses. The US government assists low paid Walmart employees with food stamps to supplement their low income.

Looks to me that a lot of Henry Lawson’s poetry is again becoming pertinent after more than a century.
I commend it to the anglosphere.

The great divide in the US widens each year. No wonder the service is so good at food and retail outlets, the employees strive to impress while quaking in their boots for fear of losing their poorly-paid jobs.

Four Corners did a programme on minimal wage earners in the US a couple months ago, it was an eye-opener.

Is McDonald’s losing business due to natural causes?