The conservative commentariat's campaign against the ABC has now reached ... Peppa the Pig. That and other media tidbits.

Well-Earned Break Watch. “While most industries are now winding down for Christmas and the summer holidays, the media sector continues to turn up to work,” wrote The Australian‘s Nick Leys on Monday. But, unfortunately for media junkies, it just ain’t so. As anyone who’s turned on the ABC in recent weeks knows, Aunty’s top TV current affairs programs (with the exception of 7.30) are already in a summer slumber. From today, so is Fran Kelly’s Radio National Breakfast. So who has the longest summer break in the Australian media? 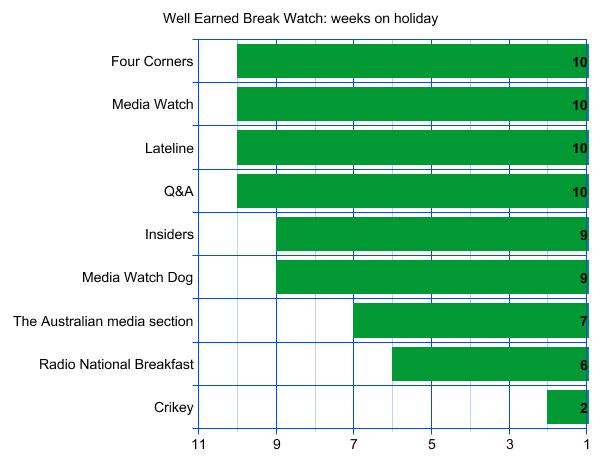 Lest anyone accuse the ABC of slackness, Aunty programs have, in fact, been increasing their on-air presence over recent years. Four Corners, for example, aired 43 episodes in 2013, compared to 41 in 2012; Q&A also airs for two more weeks than it did in 2011. Gerard Henderson would like it noted he has already published one special edition of his cult Media Watch Dog blog since it officially went on holidays. — Matthew Knott

Piers attacks feminist pigs. The conservative commentariat’s campaign against the ABC has now reached … Peppa Pig. In The Daily Telegraph today, Piers Akerman argues that “much of the rest of the ABC’s contribution to Australian life is just as saturated with Left-wing propaganda as its news and current affairs”. First, Piers singles out youth music station Triple J, which he reckons is guilty of airing “hard Left sludge”. Then he argues:

“Even the cartoon character Peppa Pig pushes a weird feminist line that would be closer to the hearts of Labor’s Handbag Hit Squad than the pre-school audience it is aimed at.”

Peppa Pig is one of the world’s most popular children’s shows and is the ABC’s most popular online program. ABC boss Mark Scott responded on Twitter this morning:

APN snafu. Is this the media ooops of 2013, or is it 2012? In a market update yesterday, APN News and Media revealed that someone had made a $51 million mistake that had forced the company to revise upwards its 2012 loss to $483.5 million. Yes, its 2012 loss — that’s nearly 12 months ago! The mistake was in its biggest business, the Australian Regional Media unit (ARM), which had overstated intangible items by $51.5 million

APN explained in its short statement:

“The ARM intangible assets were overstated at 31 December 2012 by $51.5 million. Consequently, APN’s 2012 reported loss for the year after tax of $432.0 million should have been $483.5 million. APN’s result before exceptional items is not impacted. APN and its auditor, PwC, acknowledge this error. In accordance with accounting standard AASB 108, APN will restate the 2012 comparative information included in the company’s financial statements for the year ended 31 December 2013.”

Pawn to plagiarist three. The Speccie Australia has a gift of the magi cover, featuring gold, myrrh and Frankenstein (B Bishop). UK readers are spared that, but one thing the two mags have in common is the chess column by Raymond Keene, one time grandmaster — and, according to the chess world, a plagiarist of no small order. Private Eye has a story on Keene’s antics, but for the eye-popping detail you have to go to a south London chess blog that has documented Keene’s every move  — mostly copyings from Kasparov, sometimes twice. Bizarrely, none of Keene’s employers — chiefly The Times and The Spectator — have called Keene on his thefts. Still, at least Tom “Heidi” Switzer’s behind a recycling effort at last — Guy Rundle

News of the World ed unfit for trial. Ian Edmondson, a former news editor at the News of the World, is unfit to stand trial and will be tried at a later date on charges in London of conspiracy to hack mobile phones. Edmondson had been involved in the current trial, along with seven others, including former News International boss and News of the World editor Rebekah Brooks. The news came on day 31 of the trial. — Glenn Dyer

ABC radio audience hits all-time high. ABC Radio’s five national networks had nearly 25% of the listening audience in the five capital cities in 2013, the highest on record. ABC Radio boss Kate Dundas told staff in an email the ABC’s national share of radio listening in the five metro markets hit an all-time high of 24.6% in 2013, up from last year’s 24.0%, which was the previous record. The ABC recorded gains in audience share for Radio National and Classic FM, with the big gainer the Triple J network.

And next year the Radio Multiplatform will produce an audio version of ABC TV’s iPlayer for ABC Radio, and the news division, working with radio, will produce state-based news lists for stations in each state. Both will take on existing newspaper groups owned by Fairfax, News and APN, as well as commercial radio stations, which are far behind the ABC in online.

Nielsen finished up as surveyor of Australian radio listening with this survey after 66 years, with GfK to take the reins. According to Commercial Radio Australia, the new survey methodology will include online and mobile listening. —Glenn Dyer 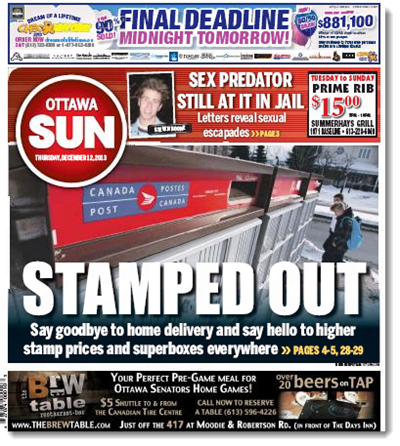 And Ian Edmondson : unfit to stand trial but fit to edit a Murdoch tabloid?
Says it all really?

The Australian also runs a Ray Keene chess column weekly – a version of the daily Times chess column that has allegedly contained plagiarised material on more than 100 occasions.

It’s inexplicable why Insiders and Lateline went on a break prior to the final sitting week of parliament. There were major developments and plenty juicy material to analyse and explore in the last days. Don’t journos dream of weeks like this?

Poor old Piers, I can see him shouting at rocks in his dotage. I’m surprised he hasn’t cut off his left hand, for fear it may be biased. Weirdo.