ACT same-sex couples were devastated by a High Court ruling on Thursday that invalidated their marriages after just a few days. But Canberra-based journalist Farz Edraki, who was at the Court, finds they are not giving up the fight. 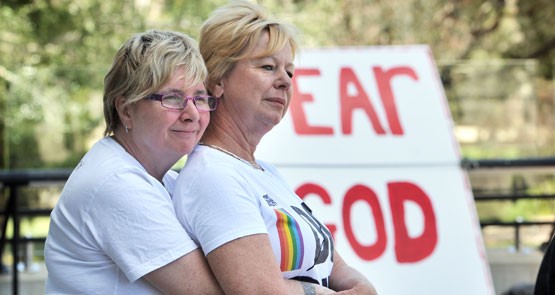 “We’ll get there in the end!” a woman in rainbow vest cries outside the glass doors of the High Court, holding up her partner’s hand. They walk past a man with a white placard: “God’s word: Say No to Gay Marriage.” Their eyes meet for a brief split-second of quiet recognition.

It took less than 10 minutes yesterday for the High Court bench to deliver the judgement gay couples in Canberra had been dreading: the ACT’s same-sex laws are invalid.

“The whole of the Marriage Equality (Same Sex) Act 2013 is inconsistent [with the federal Marriage Act] and is of no effect,” Chief Justice Robert French told the packed Canberra courtroom.

In a unanimous decision, the court found in favour of the federal government, which challenged the ACT’s same-sex marriage laws on the basis they were incompatible with Commonwealth laws and thereby unconstitutional.

While the ACT tried to argue that its same-sex laws could operate beside federal laws — since the latter only related to marriage between heterosexual couples — the High Court held that only the federal government can make laws on marriage of any kind. The High Court said in its full judgement:

For the more than 20 gay couples that married in Canberra during the last week, the decision means their marriage certificates are now defunct. (Though the ACT government has said it won’t be knocking on doors to take the certificates back, as some had feared.)

“We’re very disappointed, and I think we’ll go home and have a bit of a cry in private. It wasn’t unexpected, but it’s still devastating,” said Glenda Lloyd, who married her partner, Jennifer, on Saturday.

“If any heterosexual couple had to go through the experience of finding out whether they could be married or not by a High Court decision then maybe they’d understand,” said Jennifer.

Other couples also expressed their frustration but see Thursday’s decision as a temporary setback. “The great thing is that we’ve started, we’ve gotten the ball rolling, and we can only move forward from now,” said Hayley Wilson, whom Crikey first met at her wedding to partner Samantha Hermes on Saturday.

“We just have to believe that it will get there in the end. And that we get to have another wedding,” said Jennifer.

Legal experts say Thursday’s outcome carries some consolation for gay couples championing marriage equality in Australia. “There is one absolutely good positive of the judgement, which is that we now have an answer to the question of whether the federal government has the power to legislate on same-sex marriage — they do,” Wayne Morgan, sub-dean at ANU law school, told Crikey.

“But there is also a big negative [from the judgement]. It leaves absolutely no room in my opinion for any state or territory [to enact] same-sex marriage law.”

For marriage equality advocates, renewed calls for action will now be taken up in the political arena. Australian Marriage Equality spokesman Ivan Hinton told reporters in front of the High Court that he hoped the matter would go to a conscience vote in federal Parliament (Labor has previously allowed a conscience vote but the Liberals have not, meaning same-sex marriage can’t get through the Parliament).

“With a conscience vote, even under an Abbott government, [same-sex marriage] has a fighting chance,” Morgan said. “So now that becomes one of the major battlegrounds — to get the Coalition to give a genuine conscience vote to its members.”

“It just makes me more determined to try to push it through federally, not just in the ACT,” said a tearful Samantha Hermes.

“We’ll get there — in the end” now may be the battle cry for many gay marriage advocates.

Until the federal marriage act recognises same sex marriage then the LGBTI community will always be vulnerable to party politics and hard line religious groups. So let’s stop trying to passing state laws and focus all energies on the end game.

We would have marriage equality for all Australians if the Labor party had not buried it. Holding a conscience vote they knew was doomed to fail(due to their own right wing), is just a way to vote ‘no’ without admitting it.

Now that they’re in opposition again, they’ll cynically exploit and triangulate on the issue, even though the entire tragedy is their fault.

Mr pe ll would not allow or tolerate a conscience vote under the Abb lot gummint. Besided most of the front bench seem to be of the pe ll persuasion they would be under strict instruction for NO, NO , No. History has shown time and again entrenched and industrialised bad behaviour towards min ors will be toll erated. Not the gay marriage thingy.

There is no rational reason to deny consenting adults of the same gender to have their relationship formally recognised, with all the attendant protections, rights and responsibilities.

Said recognition does not infringe upon any other citizen’s rights nor impose any extra burden upon them. The denial of this recognition does impose a burden on those it affects, thus it is unjust.

Simple, really. It doesn’t matter if the so-called silent majority wish to deny same-sex couples’ relationships formal recognition – it’s unjust to do so and does not infringe on them, so what they want is irrelevant.

The head-line suggests a division between “Love” and “God’s Word”. There is no such thing.