Let's stop banging on about forgiveness and peace. Nelson Mandela was locked up for being a terrorist -- and sometimes armed rebellion is the only way to bring about change.

When I was a kid in Canberra, protest was my after-school activity. My revolutionary dance-card was pretty full, so it’s difficult to recall if Solidarity with the Sacked happened every other Tuesday at the Griffin Centre or if that was the designated time and place for Women’s Collective Action for Women. My memory is unclear. What is easy to remember, though, is Thursday afternoon. For two years, that was my slot for picket duty at the South African High Commission. 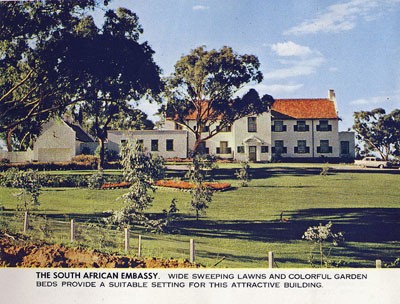 Back then, Nelson Mandela’s was one of many names I learned from the union-led picket; he was one of many unambiguously known as terrorists to our government. Mandela was one of a noble army of necessarily violent revolutionaries. There are so many names of soldiers I have long since forgotten.

Mandela, I suspect, had their names etched with prison ink into his memory over the 27 years he spent incarcerated for — let’s be clear about this — brutal terrorist acts of a class that often made the IRA look like Jamie Oliver’s campaign for school lunch.

Or a bit like me crying freedom at the vans that delivered to the big, white, impenitently colonial building on State Circle. Save for yelling at the bread truck (I mixed it up with a variety of slogans including “Victory to the PAC”, “Victory to the ANC” and “Baby-killing baker!”), these Thursday afternoons were peaceful.

They were peaceful because they could be. I was not shackled. I would not live a life without suffrage. I was not consigned to the margins of an economy and driven underground to mine and die for the wealth of a nation driven by a system all reasonable people now agree made no moral sense at all. No. I was a well-fed white girl living in a decent part of a decent nation whose fight against apartheid most usually involved talking to the AFP officer or one of the blokes from the Trades and Labour Council about Marx. Ergo, I was pretty peaceful.

Peace is a privilege of well-to-do nations who make sure to fight their wars abroad. Violence is business as usual in much of the world. Violence in the social body of South Africa was multisystem: it inhered in the state, the economy and the culture. As much as we who have never known violence of this scale and temperature would like to think a chorus of Don’t Stop Believing will stop a boot in the face, it doesn’t. All it gets you is a broken nose and an aversion to Journey.

But this, of course, is What Makes Mandela So Very Special. His Capacity for Peace and Forgiveness.

These past days, forgiveness has become the central fetish item for those eager to ride the Madiba hearse to climax. And that is every neoliberal in the world. Breathy talk of “the wholesome power of forgiveness” came from Ban Ki-moon, and then Bill Shorten and Tanya Plibersek hired the worst writer in the world (you keep using that word “unarguably”, but it does not mean what you think it means) to tell us that apartheid was ended by Mandela not with violence but with peaceful compassion.

I may be very good at yelling at bread delivery trucks, but I’m not so strong on history. However, even I recall that the end of apartheid was bloody. I also remember that the presidential Mandela bought a shit-load of weapons in a US$4.8 billion shopping excursion known in press as the South African Arms Deal.

This is not to impugn Mandela, unquestionably a courageous military leader, a learned socialist and a preternaturally gifted diplomat. It is, however, to ask Julia Baird:

… to desist in tweeting until they can stop banging on about forgiveness. Or, at least, if they can, along with most neoliberal pundits, stop turning Mandela into a Deepak-like sage who changed history through individual gentleness and yoga techniques.

That we should, as Annabel Crabb has unambiguously done, decry the “violence done” by Mandela’s ANC is peculiar. It’s a bit like saying that Churchill was a great guy save for the fact that he led us into war with Germany. We don’t need to redeem Churchill for doing that which was moral and necessary, so apologies for Mandela’s role in armed struggle might cease about now. Before you embarrass yourselves with more references to light, love and compassion.

In the 1950s, the infant ANC tried non-violent struggle and found it achieved, if we don’t count broken bones, two-fifths of nothing. Armed, they fought a regime so systemically violent, racist and unprincipled that no one is going to get upset if I call them Greedy Fat Nazis with Added Caffeine.

The Left’s hope for significant change through peace is a hot liberal fantasy masterfully retold by Barack Obama to a panting West. While the United States President spoke beautifully about the “oneness of humanity” and other stuff that sounds good but means nothing, he achieved three things — and none of these really have to do with commemorating Mandela.

The first is to muffle the sound of US military drones while praising “non-violence” as “the only solution”. The second is to appease his large Hope, Change, Awareness Ribbon fanbase. The third is to rebuild that endangered creature so central to the survival of liberal democracy, the “individual”.

A great man. An individual who defeated the odds. The power of one. Are we commemorating a great man instrumental in toppling an egregious system or writing an airport novel up in here? Ask The New York Times, which says one man was the nation’s moral centre. Ask Crabb, the ALP, the Coalition or just about anyone holding forth on Mandela, and they will give you the opposite of what I learned in my afternoons of tepid protest.

Mandela eschewed the cult of one. And that doesn’t make him humble; it makes him someone who has read lots of books.

Sure. He was a Great Man. But the Great Man theory of change is bollocks. Many comrades gave their lives to seek freedom not only from a state but also from a labour market that punished them. But I can’t remember the names.

In conversation with Billy Bragg

I do remember hearing that Nelson Mandela was, at least initially, not eligible for the Noble Peace Prize because of his use of violence early on.

And I’ve heard that until as recently as 2008 he was only allowed in the USA with special permission of the Secretary of State because he was still listed as a terrorist.

Having said that, I remember just how excited my South African friends where when he was released. Times had changed by then.

Lest we forget the remarkable role W de Klerk played in ending (rather than dismantling) apartheid, how he had a secret meeting with Mandela (still in jail) to commence discussions, how he surprised the world, South Africans, his own backbenchers and other political parties by turning his back on apartheid, unconditionally unbanned the ANC and started the ball rolling – a ball Mandela picked up and ran with. It would not have been smooth without Mandela. W de Klerk’s Damascene moment. Here it is here:
http://www.independent.co.uk/news/world/africa/fw-de-klerk-the-day-i-ended-apartheid-1886128.html

I completely share Helen’s deep frustration, and am reminded of Patrick White’s ‘Voss’, where in the opening pages White writes of society’s (pollies in particular) tendency to steal the achievements of the dead by building memorials to them, especially those whom they did not even like or approve of. Helen’s picture of a world at war with itself while mouthing platitudes about peace and forgiveness is a theme that First Dog might well explore.

Well put Helen. Don’t underestimate the power of protest though. From anti- Springbok to anti- Vietnam to anti- nuke, direct action was, and should continue to be, effective. At times. Being from ACT then also, I remember those pickets too. What about when Kerry B ran in the front doors and they wouldn’t let her out again? And bear in mind Canberra was one of Mandela’s first ports of call after his liberation. He appreciated those seemingly tepid efforts.