The Sydney Morning Herald had five adverse rulings from the Press Council this year, more than twice as many as The Australian and The Age.

Venerable broadsheet-turned-tabloid The Sydney Morning Herald breached the Australian Press Council’s standards more often than any other newspaper this year.

Since Crikey‘s last survey of press council rulings — which had the Herald Sun topping the list in 2012 — the self-regulatory supremo has upheld five complaints against the SMH. Southern sibling The Age and News Corp rival The Australian were next, with two adverse rulings each.

The SMH was today pinged for claiming that NSW Liberal politician Catherine Cusack had “stunned colleagues” by arguing sections of the gay community had excluded women from the fight against AIDS. Earlier this month a complaint was also upheld about a series of SMH reports probing former NSW treasurer Michael Costa’s involvement with a water services company linked to ex-Labor powerbroker Eddie Obeid. In both cases, the council found the paper had not done enough to ensure accuracy and fairness in some areas of its reports, but dismissed other aspects of the complaints.

The SMH was also slapped for a damning profile of maverick journalist Jonathan Marshall and a story on Tasmanian Liberal Party candidate’s angry reaction to a satirical article poking fun at him.

The council found Fairfax reporter Mark Baker erred in not contacting law firm Slater & Gordon for an Australian Workers’ Union slush fund article. Baker later decried the ruling as “flawed and illogical” and called on the press council to ban people with “a preference for cardigans and twin-sets” from its membership. 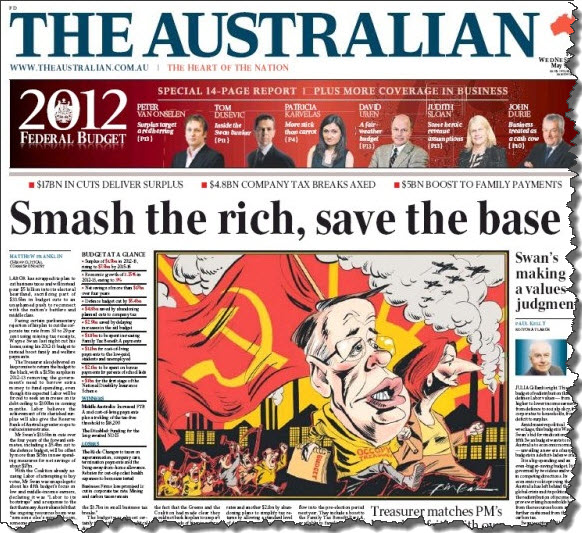 Adelaide’s The Advertiser was slapped for “serious errors” in a report claiming South Australians had ripped $78 million off Centrelink over the past year (the true figure was $2.5 million, according to the Department of Human Services). The council found the paper should also have labelled a follow-up “clarification” as a correction and published it in a more prominent position.

Herald Sun columnist Andrew Bolt was found to have misled readers by claiming data from Britain’s Met Office showed the world hadn’t warmed for 15 years. The council also found a piece in The Australian by James Delingpole comparing the wind farm industry to a “paedophile ring” guilty of inaccuracy, offensiveness and misrepresentation. The Oz and The Daily Telegraph were also slapped over reports suggesting European Commission boss Jose Manuel Barroso had taken aim at Julia Gillard during a press conference.

The council found a Women’s Day article on the Church of Scientology lacked fairness and balance, and breached the privacy of a 13-year-old by publishing a highly personal email to her father.

Two of the council’s most interesting verdicts were those clearing The Australian and The Daily Telegraph of wrongdoing in provocative cartooning and photoshopping efforts. The Oz‘s Bill Leak was let off the hook for depicting Julia Gillard and Wayne Swan as communists, while the Tele was cleared for portraying Peter Slipper as a rat. Both were given the OK on freedom of expression grounds. But the council issued a stern warning for papers not to go overboard in humiliating politicians. “The Council does not consider that politicians are ‘fair game’ for extreme levels of abuse and ridicule,” it said in a verdict. “Indeed, such behaviour can unreasonably inhibit their freedom of expression as well as harm the important processes of democracy and good governance.”

Next year the council will hand down verdicts on complaints about newspaper election campaign coverage.

The press council’s full suite of adjudications can be read on its website.

soo … there’s no regulatory body to slap professional misconduct cahrges on journos like other professions. Seems like a slap on the wrist from toothless tigers at the “council’

There’s another angle to this: The press council’s censures are for stories the press covered improperly.

What about important events the press *should* have covered but didn’t due to conflict of interest c.f. limited resources?

e.g. not wanting to upset advertisers or get the government off side; running official leaks; close relationships between journalists and alleged perpetrators; or refusing to tell their readership about important events just because a rival media outlet broke the story first?