Nelson Mandela's death produced the usual crop of crazy from the Right.

Double-speak from the Right on Mandela. Nelson Mandela’s death produced the usual crop of crazy from the Right, who had to deal with the tricky issue that their champions of the 1980s had labelled the man a terrorist for refusing to renounce armed struggle against a racist dictatorship — only to see him become perhaps the most loved and respected man on earth. How to square the circle? The Wall Street Journal had the answer in a self-parodic op-ed, which argued:

“The bulk of his adult life, Nelson Mandela was a failed Marxist revolutionary and leftist icon, the Che Guevara of Africa. Then in his 70s he had the chance to govern. He chose national reconciliation over reprisal, and he thus made himself an historic and all too rare example of a wise revolutionary leader … He started his life sentence at Robben Island prison near Cape Town a would-be Lenin. He walked out of jail on February 11, 1990 — at age 71 — an African Havel.”

You get it? The Afrikaners were doing him a favour by whacking him in jail for a quarter century. It was their contribution to the healing process. This wacky notion was largely based on disinfo — Mandela had explicitly noted in his Rivonia trail speech that the ANC and the 1955 “Freedom Charter” stated that post-apartheid South Africa would be a social democratic, but not a socialist, state, and that he was a supporter of liberal institutions, contrary to Marxist belief. But it was also sheer fantasy, the usual one — in which the whites are really the hero of the piece (cf. the execrable Power of One).

The WSJ piece was taken up by Tim Blair, and then — right-wing blogs are about 40% original content these days — Andrew Bolt, who added his own take in a column, arguing that Mandela was “a man of violence”. Of course Bolt would have more than passing sympathy for apartheid-era South Africa — his batty politics come from the same source as apartheid, which is why his revolting skin-based assessments of people’s Aboriginality sounds like a freelance version of the old apartheid-era Racial Classification Board.

In the United States, the National Review exemplified American conservatism at its most narcissist, damning Mandela for “anti-American” statements, which had even that site’s wacko commenters pointing out that Mandela’s capture had been arranged by the CIA, so he might have felt a little ticked off. The coup de grace was probably Rick Santorum, who compared himself to Mandela because he too was fighting tyranny, i.e. Obamacare. In the United Kingdom, The Telegraph, after behaving itself for three days, couldn’t restrain a hooray Henry bray, with blogger Tim Stanley guffawing:

“Time magazine has chosen Pope Francis as its Person of the Year, but I’d like to nominate someone else. That guy who stood next to Barack Obama at Nelson Mandela’s memorial service and spoke gibberish in sign language. Bravo, sir!”

Bravo, indeed. So much more fun that talking about that unctuous thin bastard in the coffin, what? But by far the weirdest reaction came from Newt Gingrich, who turned his fire on … his fellow conservatives. In a statement entitled “What Would You Have Done?”, Gingrich made the point that Mandela and the ANC had pretty much everything in common with the American revolutionaries, and that he had turned to communist support after being deserted by the Right. So far, reaction to that from the official conservative establishment to this has been … silent. Still, it sets a standard for the Oz Right — officially crazier than Newt Gingrich. Something we can all get behind. — Guy Rundle

Review: Hoges’ tax bill show. If somebody had told me that hidden within An Evening with Hoges was an intriguing look at the development of Australian pop culture over the last half-century, I would’ve told ’em they’re dreamin’.Given his recent divorce from Crocodile Dundee co-star Linda Kozlowski and his notorious feud with the Australian Tax Office, which he owed over $100 million, you’d have to wonder if this was just an instance of Hoges (Paul Hogan, if you haven’t caught on) cashing in. Had he just chucked together a “best-of” to bring out his die-hard fans in their droves? As the smell of beer wafted through Melbourne’s Princess Theatre and over the mostly older crowd, who weren’t exactly dressed to the nines, it didn’t seem we were in for a particularly sophisticated theatrical experience.

And we weren’t. Sophistication was never part of Hogan’s schtick. An Evening with Hoges is basically a stand-up autobiography, with clips from throughout his career; a kind of “family slide night”, as he describes it. Hogan casually runs through his life story, from the Harbour Bridge to Hollywood, touching on how he came to be on TV, his rise in the local market, international success, and the Crocodile Dundee phenomenon. He still knows how to win a laugh, and he knows how to tell a story. — Ben Neutz (read the full story at Daily Review)

Kyle Sandwich-lands. The Daily Telegraph has a prominent story on page two this morning that Kyle Sandilands has put on a bit of weight while on holiday in Fiji. Describing the shock-jock as “larger-than-ever”, Annette Sharp has speculated as to Sandilands’ “buffet of snags, prawns, pasta, pastries, pizza, fries …”. We’re worried for Sharp, given that Sandilands called News.com.au entertainment editor Alison Stephenson a “fat slag” merely for pointing out that his show was garnering low ratings … 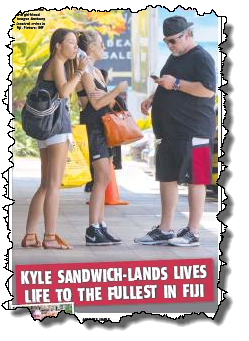 Correction of the day. Photo editors at The Sydney Morning Herald have egg on their faces this morning after they misidentified a photo of Chinese President Xi Jinping as Chinese Premier Li Keqiang …

Front page of the day. Time magazine has named Pope Francis as its Person of the Year for 2013. Francis is the first non-European pope for 1200 years, and his humility and more liberal attitudes have prompted many to hope that he will be a voice of reform for a Catholic Church long mired in the miasma of corruption and cover-ups. Called “The People’s Pope”, Francis embodies the Catholic virtue of humility, eschewing the “Popemobile” for the bus and ministering to the poor. 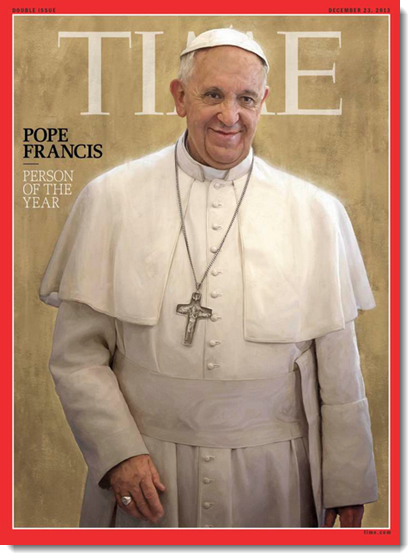 Dear Crikey, on this most miserable of days, thanks for that glorious snap of schadenfreude. Kyle Sandilands the LARGER.

What a sight for sore eyes – despite Oz having abandoned knighthoods let’s refer to him as Sir Cumference.