Snowden smashing the shackles of totalitarianism

Will Edward Snowden get a hero's sendoff when he dies? Crikey's writer-at-large hopes so, as he is a hero every bit as much as Mandela. 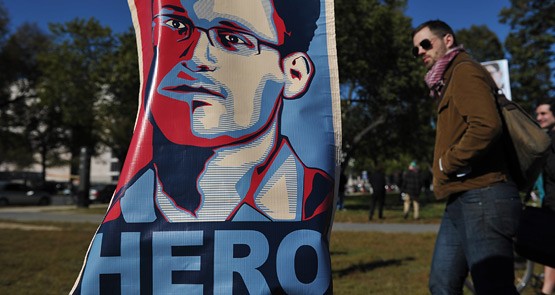 What will the successors to today’s politicians say at the — hopefully long distant — funeral of Edward Snowden?  So one wonders while watching former members of the “hang Nelson Mandela” club line up to pay their respects to the great leader. Will we have to endure endless paeans of praise for the integrity of the man who gave us the clearest possible proof of a system of total surveillance of supposedly “free” societies? Stuff about the indomitability of individual courage in the face of indifference, etc?

It is looking increasingly likely that this will be the case. As the former urban guerrilla and ally of communists is laid to rest redefined as a “healer” and “forgiver”, the post-Snowden campaign is just hotting up. Several days ago, Google, Microsoft and several other groups that had been involved in the “PRISM” program of passing on comms information to America’s National Security Agency suddenly rediscovered their earlier, hippier side, and made a statement urging that the NSA be restrained from general all-purpose information collection, and be permitted only to target specific individuals.

Two days later — and as with the Google etc letter, in anticipation of a review of NSA practices being delivered next week — 500 authors have been corralled together from across the world to sign a letter of protest against such surveillance practices. It was an odd list — there were some from the Australian continent I would gladly consign to Guantanamo, but let that go — but a further drawing of the issue into the light from the shoulder-shrugging “whatcanyado?” to some real consideration of global civil society.

Doubtless the cynics will say business as usual will continue after the initial clamour, and doubtless they are partly right. But what Snowden’s revelations have made clear — have made an object of public debate — is that the process of intelligence-gathering has become open-ended, autonomous and totalising. Intelligence agencies, established in the modern form by states after WWI, and especially after WWII, emerge from state imperatives, but rapidly reverse the relationship — becoming autonomous bodies with states attached.

That makes the defence of the foreign policy club — that Snowden is in some sense a “traitor” to US interests, by revealing the totalising nature of surveillance — even more bizarre than the usual frothings of the Right. For it is obvious that intelligence agencies have far more in common with each other than with the states they serve, and that no calculus of genuine “national interest” can be made in letting them have a free hand.

Interestingly, this is something the Right once understood — or at last paid lip service to. Conspiratorial powers often get an initial boost from their closed nature. Indeed, for the first half of the 20th century, commentators worried that “democracies” — liberal parliamentary systems, really — would be disadvantaged in conflict with dictatorships. But as Popper showed in the wake of WWII, such systems lack feedback and reality-testing capabilities, and eventually silt up with false information, which makes it impossible to accurately steer action.

Now, when that argument has become the preserve of dissidents within this system, the foreign policy establishment has swung round to a near-gnostic view of intel, with more than a whiff of old Soviet-era logic. Not only are we not allowed to know what they know, we are not allowed to know what we don’t know about what they know. Democracy and freedom must be preserved by their abnegation at a higher level — entrusted to a series of guardians who will ensure its spirit only by traducing it at every opportunity. The contradictions of this have now become obvious to millions of people, which is why the defenders of the system have been reduced to spitting absurdity.

But what I find even more interesting, and worth noting, is the continuum that created this process, and what a stunning and predicted process it has been. For though many want to focus on Snowden as the lone hero, there seems little doubt he would not have done as he did if the whole relationship between governments, publics and information had not been categorically shifted in the global public mind by the waves of mass WikiLeaks releases that had begun with the Afghanistan war logs in 2010.

What is truly extraordinary about this is that the process has occurred almost exactly as had been set out in WikiLeaks’ manifesto/theoretical squib by Julian Assange in an essay he entitled “Governance as conspiracy“. In this short piece, Assange argued that mass leaking was not a way of abolishing all governments, but of getting better governance, a different relationship. Crucial to Assange’s argument (aside from anonymity) was that previous small-scale leaking did not change the power ratio between governments and citizens — indeed, it acted as a sort of pressure valve for power systems to maintain stability (one reason why organs like Private Eye were so ticked off with WikiLeaks — WL had ruined the game of an official dissenting establishment).

What was required were mega-leaks, huge volumes of information, which not only even up the information gap between state (i.e. conspiracy) and society, but also changed people’s idea of what they had the right to see, read and know. The final part of that was that those managing the leaking systems — WikiLeaks, etc — should make themselves visible, and present, in their confrontation with the state, and that this would communicate courage (“courage is infectious”) to others. That’s another irony, since Assange’s idea of courage in the face of total systems appears to have been acquired from Aleksandr Solzhenitsyn, hitherto a touchstone of the foreign policy establishment’s anti-leftism.

Snowden didn’t leak through WikiLeaks — in some trouble by the time he appeared — but I do not see how his actions can be anything other than a product of the process and context that WikiLeaks put in place. Nor would it have happened had WL not adopted a specific strategy in contrast to the usual “petty” libertarianism of the hackerati — one of mass leaks, audacious and visible challenge to the state. Quite aside from anything else, that must make the whole process — from a document circulated in the Melbourne Uni maths common room in 2006 to now — one of the most stunningly successful enactments of a theorised political strategy in recent years.

Why that matters — quite aside from credit-where-due, etc — is that Snowden’s acts can seem as if they are in contrast to the WikiLeaks process, since Snowden’s act appears to be a noble and individual act, done without context, save the conscience. Some level of individual will was required, of course, a final decision to transgress — but it occurs within a context, and a way of understanding how the world works. The better theory gives the better picture, and the better picture allows for more successful action. If there seems a long way to go in the struggle against this new totalitarian system, it is worth stepping back and reminding oneself that this is the NSA one has challenged, the NSA — once as all-encompassing as apartheid, and hopefully, in its current form, destined for the same fate.

I think it’s wrong to see this as a left/right thing. The real division here is between those who worship power (whether corporate or state) and those who believe in individual freedom. There are certainly plenty of conservative libertarian-minded people who have supported Wikileaks and Snowden right from the start.

Didn’t Le Carre show ‘Karla” & Smiley having much more in common with each other than the respective Establishments?
Let us at least acknowledge that no decent human being would do what spooks routinely do, whether for ‘the Crown’ or ‘the People’ or wotever alien overlord happens to be in the seat of power.
With their intrinsic lack of empathy, these men without navels would, in the real world without the shield and huge weapon of secrecy, be lucky to be an apprentice to Good Soldier Schweik in his civilian job.

Can we please include Bradley Manning in this coterie as well. Snowdon, Manning, the Occupy movement are all heroes before their time.
The sad fact of Mandela is that he achieved his aim of getting rid of a despised process in SAFR, but the inequities for the ordinary black African (slums, lack of health care etc)were not addressed in his revolution. The enemy of the ordinary person is not necessarily the government processes, it is what’s behind them and who pays the piper; revolution now!

Good grief, Rundle, for a moment I thought you were channelling Rumsfeld.

Re Mandela’s funeral, the Leunig cartoon summed up the mourning dignitaries neatly.

Given that the spying industry in America is one of their largest employers, isn’t it incredible that till now there have been only 3 people who though this was a problem.

The issue is that tens of thousands of American and Australian’s (Asio Etc) within this industry though what was happening was okay, I find frightening.