Crikey took a V8 SSV Commodore -- perhaps the last all-Aussie car -- out for a spin to contemplate whether Holden's manufacturing workforce is worth saving. 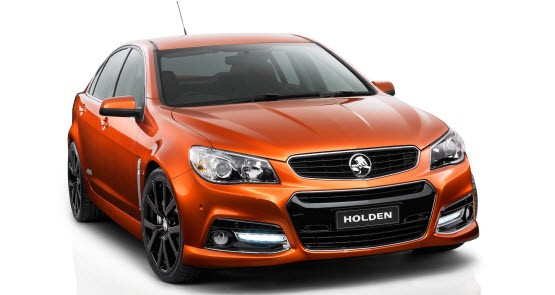 I am driving what is probably the last all-Australian car, a rumbling six-litre V8 SSV Redline Commodore, and I’m like an 18-year-old again, gulping as I put my foot down, weaving in and out of the fast lane on the way south to Wollongong. The car just wants to go.

I’m not especially emotional about Holden, although your first car is your best car and mine was a ’63 EH bought in 1986 for $600. It would be easy, though, to wax nostalgic about the cultural significance of utes and pannies, Monaros and Toranas.

But before calmly contemplating the death of Holden, ask yourself: when is the last time you drove one? For me it was the bomb HD I owned more than 20 years ago. So I was possibly predisposed to agree Holden is a dinosaur; they make big cars people don’t want to buy any more. It’s not true — Commodore has consistently been one of our top sellers for three decades and all five locally-made cars figured in the top 10 last year.

Australian Manufacturing Workers Union secretary Dave Smith told me the latest Holdens compare well to foreign cars costing three times as much. Drive one before you write about it, he said, so I did.

The VF Commodore is of course made by an American company, GM, but this is a Holden: designed, engineered and manufactured here. Ford has already announced it will stop manufacturing in two years and, even if Holden stays beyond 2016, the next-generation cars it makes here will use a global platform — like GM’s Cruze, or Toyota’s Camry, which are made round the world.

If the Australian car is nearly extinct, it is not because we made dud cars. But for our high dollar and GM’s woes at home, the VF may well have been a flag-bearer for Australian know-how, plugging gaps in GM’s line-up in Europe and the United States.

I test drove the SSV for five days. I’m no race car driver, but as an ex-cabbie I know what a clunker feels like. The VF is not that: it does not feel big, heavy or cumbersome. It does not roll through corners. It is not loud. The build and trim are not so-so. It is stupidly fast, the gear-shift short, the steering precise, and it sits effortlessly flat through bends at speeds way over the advisory limit. The Redline’s 6L V8 motor — made in Mexico by GM — was prodigious. I can’t speak for the other luxury makes, but this is an awesome car — the best I’ve ever driven, though that’s not saying much — and has all the superfluous bells and whistles: head-up display (who cares?), reverse park assist (another button I missed), alarms when you close in on another car (spooked me into leaving a four-foot gap when parking) and a blind spot alert on the mirrors (absolute genius!).

After some 402 kilometres of city and highway driving, however, my first tank takes 61.7 litres costing $102.40, and I’ve got a bit over 15L/100km. Fun, but clearly ridiculous in an age of inexorably rising petrol prices and worsening climate change. The clincher: at $51,490 recommended retail price, on a modest journo’s wage, I could never buy one. With two kids and two dogs, in the market for our first new car last year, we considered a Commodore wagon, but the V6 starts at $41,099 and instead we paid $32,000 for a two-litre, four-cylinder diesel VW Transporter with rear seat and windows that does 800km-plus on a tank and should go forever.

Who is the target market for a Commodore nowadays? There’s no cachet. Which is perhaps part of GM’s problem: it’s a safe bet plenty of Liberal voters (not to mention MPs) are driving Audis and Mercs and wouldn’t be seen dead in a Holden. But this is not party-political. In 2002, then-PM John Howard eschewed economic rationalism to continue support for the Australian car industry until 2015.

In the end it’s not all about Holden. It’s about critical mass for an automotive industry that employs some 45,000 people directly — who pay some $720 million a year in income tax, according to one submission to the Productivity Commission inquiry — and up to 200,000 people indirectly. Without Holden, Toyota will go and myriad suppliers could close their doors.

Those supplier submissions to the PC make painful reading. Futuris cites figures showing the proportion of locally made cars produced (including cars we export) versus total cars sold here has fallen from 53% to 20% over the last 20 years. Of cars sold here, 86% are imported of which 44% are from Japan, 21% from Thailand, 20% from Korea and 10% from Germany.

But our tariff at 5% is completely out of whack with those competitors: Thailand makes 10 times as many cars as us, but has an 80% import tariff; China has 25%; Korea and Germany have 10% tariffs. It is a recurring theme of the submissions: that we have the least protected automotive industry in the world.

Scale is critical; we need to lift local production from about 220,000 cars a year — less once Ford leaves — back over 300,000 and preferably 400,000 cars a year. Government fleets alone could switch from buying imports to purchasing another 40,000 Australian cars a year, Futuris estimates.

The non-profit Victorian Centre for Advanced Materials Manufacturing emphasises the importance of the sector to growing high-tech local industries like carbon fibre composites in Geelong, that can transfer their engineering design skills as suppliers to car makers, to industries like energy and defence. VCAMM says bluntly the engineering centres of Holden and Ford in Victoria are:

“… far the most significant local breeding ground for the critically important skills required for new globally competitive innovative manufacturing businesses required to sustain our sophisticated industry network. To our knowledge, there are virtually no other complete supply chains in Australia with this scale of capability.”

Let’s be pragmatic, rather than ideological. We do not have a competitive advantage in car-making, which is increasingly geared to global platforms on a huge scale. But if the dollar gets back in its box our car industry could yet find a clever niche, and it is the foundation of what’s left of our manufacturing sector. Are we so committed to yanking subsidies to the car industry that we are prepared to outlay more money in foregone income tax revenue and welfare benefits and subsidies like payroll tax concessions for other industries that will be needed to prop up the economy, especially in South Australia? Is it rational to spend more money destroying an industry than it would cost to save it?

Maybe GM-H struck a dud enterprise bargaining agreement, as the likes of industrial relations commentator Grace Collier have argued. But the industry’s labour productivity has actually improved, as Grogs Gamut pointed out in The Guardian on Monday.

VCAMM also notes the misalignment of parent company strategies — particularly GM — with local industry interests and insists that ongoing assistance should be part of a comprehensive vehicle industry plan and “not simply a subsidy to buy a few more years from one operation”. It’s not about Holden, but who else is going to step up and invest hundreds of millions of dollars in advanced Australian manufacturing?

A decade’s employment means a lot to those tens of thousands of workers who depend on car manufacturing — who I’m sure are not telling their kids the industry is the future. There’s no question of a blank cheque. Our car industry is in painful transition, it’s a question of how rapid it has to be. Surely at least we can wait until the Productivity Commission has delivered its report next year before we abandon a manufacturing capability that, once lost, is gone forever.

One submission to the PC raised the conversion of auto plants to make Australian aircraft and armoured vehicles in WWII. Who is to say we won’t need that capability again?

>”But if the dollar gets back in its box…”

Let’s not be passive about it. The dollar should be put back in its box, forcibly. Years ago, this would be achieved by a government body buying lots of gold, thereby flooding the international market with Aussie dollars, and bringing its price back down to where our exporters need it to be.

The Swiss have been buying foreign currency, in lieu of gold, to the same effect. But there must be many other countercyclical stores of value than gold or foreign currency.

When our currency gets too cheap, the AUD price of this commodity increases, almost by definition. Then the Reserve Bank (or whoever) sells the previously-bought commodity, saves our currency and coincidentally makes a whacking great profit on the deal.

Whilst the SSV is all Australian V8, I thought the Cruze was the first all Australian built 4 cylinder (and still being built) and, having driven it extensively, an excellent vehicle.
PM , at last some sence in this whole dicussion, both Holden and QANTAS have a strategic importance to Australia in an emergency, as you stated occured during WW2. There was no home grown aviation or vehicle building industry of note in 1939. The closest thing to such industries were railway rolling stock production, domestic appliance production (hence the Everleigh railway workshops also built Beaufort bombers, Rheem built parts for Tiger Moth trainers, Government Aircraft Corporation was created to build fighters and light bombers).
Holden started after WW2 to address the shortfall the war highlighted. Part of the problem is also that GM is US. Buy it out, build cars of carbon fibre and fuel cell powertrains and start the green revolution on the road, all else are maintaining the status quo with finite fuel supplies; Where’s some bloody vision in this country; Revolution Now!

Good atricle Paddy, mostly it’s been about scrapping the industry, without thinking it through…I wasn’t aware that our tariffs are so low in comaprison to other countries.

The australian manufactured car is not much chop! It is influenced by the USA. As such, no it dose not deserve to be saved at all ! Edward James