The new CEO of General Motors is unlikely to reverse the company's reported decision to close its Australian operations -- she's the one who made it, Glenn Dyer and Bernard Keane report. 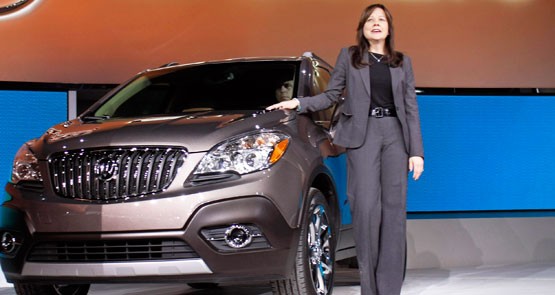 General Motors has a new CEO, and it’s the executive who has played a key role in reviewing the company’s future in Europe, South Korea and Australia. And so far that executive has convinced the GM board to cut in Europe, cut in South Korea and make other changes, and reportedly to close Australian operations.

The incoming chief executive at GM is Mary Barra, the first woman to head the company and previously the car maker’s global head of product development, purchasing and supply chain. For the past year or more she has been charged by the outgoing CEO and chairman, Dan Akerson, with reviewing GM’s operations in poorly performing assets in Europe and Asia. In the past week or so, we have seen more results of that review emerge from GM with cuts in Europe, South Korea and the decision reported in the Wall Street Journal this week to close Holden from 2016. Media reports of that decision have not been categorically denied by GM or Holden in this country.

The GM board chose Barra over three rivals at a board meeting overnight in the United States. Akerson will step down in mid-January, leaving six months or so earlier than planned because his wife is ill. Barra will be GM’s fifth CEO since Rick Wagoner was forced out by the Obama administration in March 2009. Akerson took over in 2010, as the car maker was being relisted on US stock exchanges after the $US49 billion bailout by the US government. The US Treasury sold the last of those shares this week at a loss of $US10 billion.

Theodore Solso (a former CEO of Cummins, the engine maker) will succeed Akerson as chairman, in itself is a significant move in the context of US business practice where splitting the chairman and CEO roles in big companies is very rare (Rupert Murdoch has refused to countenance the idea at News Corp and then 21st Century Fox).

In her current role, Barra has been a key part of the decision-making on the future of Holden and GM’s South Korean involvement and the future of its European operations, especially in Germany and the UK. All new car models and material sourcing decisions go through her office in Detroit. GM has sales around the world of $US152 billion, and her current role makes Barra the most important person in that figure.

Barra, an engineer and the daughter of a GM worker, has spent her whole working life at the company, beginning in 1980, before her 20th birthday. She was once the company’s head of human resources and reportedly became involved in marketing areas, concentrating on the future of the Cruze model, which lifted her profile. She was then moved to the global production position by Akerson in 2010. He later added purchasing to her area of responsibility.

During her career she was vice-president for global manufacturing engineering, ran GM’s Detroit Hamtramck assembly plant has also been executive director of competitive operations engineering. She knows cars and how they are made and how they can be made profitably.

According to US reports he then gave her the responsibility for cost-cutting and streamlining the company’s global vehicle development, especially in Europe and Asia, where a number of senior management appointments and other measures (such as closing a car plant in Germany) have been announced this year.

Holden’s future is part of these changes. Earlier this week the company said it would stop selling Chevrolet brand of vehicles in Europe from 2016. Chevrolet sold 195,000 vehicles in Europe in 2012 and a further 137,000 in the first 10 months of this year. But these sales have been at a loss (just as Holden’s falling sales are generating losses in Australia). GM will focus on its major European brands: Opel in Germany and Vauxhall in the UK. In South Korea, production will be cut by 20%, reducing production to 650,000 units a year from 800,000 last year.

Barra will either confirm the previously reported decision to close the Australian operations in 2016 or not. Given her current role in that decision, the chances of the latter are remote.

GM will move vehicle development to other locations, such as Spain, where the new Cruze model could be made instead of South Korea. A sports utility will be moved to Spain from South Korea in 2014, and a small car and two commercial vehicles will stop being made next year as well. If the Cruze is made in Spain, then South Korean production will fall even further after 2015, putting more pressure on the Holden engine plant in Melbourne. GM’s South Korean business supplies car models and parts to Australia and Holden ships engines to South Korea, as well as Thailand and China. With the cutbacks planned for South Korea, the future of Australian car engine exports will be up in the air, potentially cutting off the domestic car business from locally sourced engines.

Driving all this change is pressure on GM’s board and management to lift profits and the share price. The latter has already reacted — rising 41% so far this year, better than Ford’s and Toyota’s share prices. And this week, shares hit a 12-month high of $US40.88 when The Wall Street Journalreported overseas closures, including Australia. Barra’s replacement will be Chief Financial Officer Dan Ammann who will take over managing the auto maker’s overseas operations operations. Ammann will be the company’s point man for the decision to close Holden.

Yesterday in question time, Treasurer Joe Hockey in effect told General Motors it was a parasite company that was remitting Australian profits to Detroit and that it was already getting generous taxpayer handouts here that other industries would be delighted to access. Most likely, Barra is of a mind to heed Joe’s advice and bail out of this tiny market.

The latest China’s international trade figures, which were released during last weekend, are good but only limited to the Export from China. The figures of Imports into China are weak and have actually dropped significantly. It means China’s demands on importing goods from other countries, e.g. Australia etc. has been reduced substantially.

In such unfavorable case, the Australian government should consider to adopt stronger monetary easing policy to drive the AUD downwards healthily. So, our Export competitiveness can be strengthened again and, our economy can be improved.

Hope this can improve our car export business and save Holden.

Seriously, this is going to go unquestioned?

(Of course since GMH is not a listed Australian entity and I am guessing their performance is not separated out clearly in any GM annual report, this might have a convenient air of mystery to it.)

Meanwhile, with their ≈$3 to $4bn fossil fuel subsidies (EACH year) and massive infrastructure tax writedowns (ie. part subsidized by the Australian taxpayers) the Big Miners repatriate upwards of 70% of profits via dividends to their non-Australian shareholders without a murmur from anyone.

I believe that what the Japan’s monetary easing policy is doing to push the YEN downwards healthily is an appropriate action for the Australian government to contemplate. In a layman term, just print more money to make the currency move downwards peacefully.

Since the YEN is much cheaper now than before, the Japanese export and tourism businesses now become active again. This is exactly what we want to see here in Australia.

The Australian government needs to consider adopting similar monetary easing policy to drive the AUD downwards rightly. So, our Export competitiveness can be strengthened again and, our economy can be improved.

This can help improving our Car Exports to other countries and save our car manufacturing industry.