Miranda Devine is happy to lay the blame for most things at environmentalists' feet, but rape is a bit far, even for her. Plus other media snippets of the day.

Greenies and rape: Devine’s WTF. Miranda Devine may have hit a new low in The Daily Telegraph today. In her new column, Devine blames carbon activism for … wait for it … rape. She points to the rape of a Belgian tourist in a dark alley in Potts Point a few weeks ago, saying it might not have happened if the area were better lighted. That may well be true, as Devine points out there is a single streetlamp in the alley, and a tree blocks its light. But then she makes the completely nonsensical leap that “[t]he big worry is that Sydney’s dim lighting will fade even more, thanks to Lord Mayor Clover Moore’s jihad against ‘carbon pollution'”. 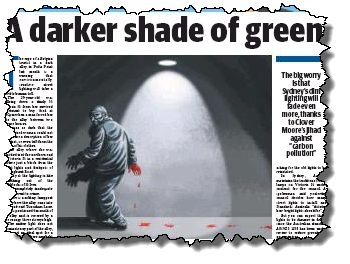 Devine rails against Sydney City Council’s plans to introduce more environmentally friendly LED lighting instead of the older-style streetlights, sidestepping the question of whether the streetlight in the alley where the crime occurred was LED or standard. She does say it was “amber” — we’re betting that means a standard light, with a warmer colour, rather than the cooler, whiter light of LED. And as Devine herself admits, the “lumen” readings of LED and standard lighting are the same.

Devine this morning apologised to Moore for claiming lights had not been installed in the alley since the attack. A note attached to Devine’s article reads:

“An earlier version of this column claimed the council had not yet installed lights in the Victoria Street alley. This is not the case. Three new lights have been installed since the attack and the installation of further lights in the area is planned. The Daily Telegraph regrets the error and apologises to the council.”

Moore took to Twitter this morning to blast Devine, saying her claims about LED lights were wrong and surveys had shown they are brighter than ordinary lights. — Cassidy Knowlton

Mandela v Mrs Brown’s Boys. “BBC sends 120 crew to cover Mandela funeral”, the Daily Mail fumed today, noting that commercial rival ITV — home of such gems as  I’m a Celebrity Get Me Out of Here and Peter Andre’s 60 Minute Makeover — had managed to do it with nine. The BBC’s huge roster was despite the BBC receiving “more than 1000” complaints about excessive coverage. Yeah, erm, quite, although worth pointing out that a lot of those 1000-plus comments — 1000 of them, in fact — came when BBC1 interrupted the last 12 minutes of daggy (and very funny) Irish retro sitcom Mrs Brown’s Boys (episode: “Mammy’s Arse”), thus missing out on three sight gags involving a kick in the nuts, and eight “fecks”. A huge groundswell indeed. Still, at least Anti-News Unlimited will have some competition in the ABCrazy stakes when the Daily Mail comes to town — Guy Rundle

Liverpool Post wraps in print. United Kingdom media group Trinity Mirror is to stop publishing the Liverpool Post, a paper published since 1855 but reduced from a daily to a weekly paper in recent years to try and save it. No journalists’ jobs will be lost, but the closure is one of the more significant in the UK newspaper sector in the current crunch. Trinity Mirrow said the final edition would be published on December 19. After that, the title will be retained only as a section of the Liverpool Echo. The Liverpool Business Daily e-edition will also close on the same day. To offset the closures, Trinity Mirror said in the statement that it will invest more in the Echo.

UK media analysts said the closure was a long time coming. The Post was moved to a weekly publication back in January of last week (its Saturday edition was ended three years earlier). After going weekly it sold less than 5500 copies an edition, which was clearly unsustainable for Trinity Mirror. — Glenn Dyer

Front page(s) of the day. Barack Obama and the colours of the South African flag are splashed over the nation’s newspapers today … 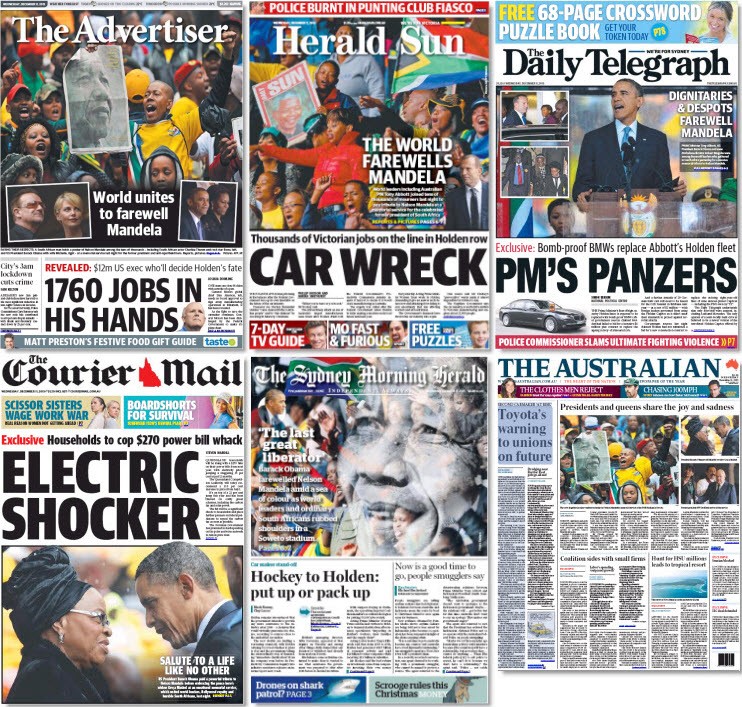 >”a single streetlamp in the alley, and a tree blocks its light”

At least she didnt demand the tree be chopped down.

Who says Conservatives can’t do irony …. maybe not “on purpose”…?

Just google Miranda Devine and ‘pool fencing law’ or ‘nanny state’. You will get SMH articles for 2009 (two at least). She struck a blow for ‘freedom’ in 2009 crusading against tighter pool fencing laws designed to further protect toddlers from drowning.

Raising the question how many toddlers drowned since then as a result of the influence of her articles? Hopefully none.

But not for the want of trying by Devine, who back then railed against the “nanny state” ever being able to make the world “safe”.

Back then it was grotesque non sequiturs against the incumbent NSW and federal Labor incumbents.

Today against indy Clover Moore. Devineapparently puts the “evil” in Murdoch tabloid. The fruit doesn’t fall far from the tree. Frank was a moral car wreck too.

Thomas Miranda is a paid mouth piece that is all. She probably doesn’t even know what her own true opinions are. Think of her as a stormtrooper who reports back to Darth. Bolt is the same. As will be Tony Abbott quite soon.