The decline of manufacturing in Australia was the most popular topic of conversation across all media this week.

The future of Australia’s two great transport icons, Qantas and Holden, dominated political coverage this week, with independent Senator Nick Xenophon leaping his way into the list with calls for just about everyone at Qantas to be sacked and delivering the usual South Australian horror at any suggestion the automotive industry should pay its own way. He also got coverage calling for inquiries into AFP phone surveillance, GMO foods and the pokies, after the opposition backed down on even the paper thin pokie reforms it had allowed to go through in the last parliament. Nick has been a busy chap.

Industry Minister Ian MacFarlane, South Australian Premier Jay Weatherill and Opposition Industry Spokesman Kim Carr were the other big movers due to the discussion about Holden’s future. There was intense media debate about what the government is trying to achieve in publicly calling out General Motors, with many saying it might be a convenient way to try and palm off as much responsibility as possible for their departure, while others saw brinkmanship before the government comes to an inevitable deal to throw in some portion of what Holden is asking for. Either way, the media has found Carr’s apoplexy mighty newsworthy.

Greens leader Christine Milne continues to rise in the list, receiving plenty of coverage following the deal on the debt ceiling, as well as the timing of the carbon tax repeal vote and the government’s decision to allow the Abbot Point port expansion in Queensland, which pushed Environment Minister Greg Hunt into the top 10 as well. 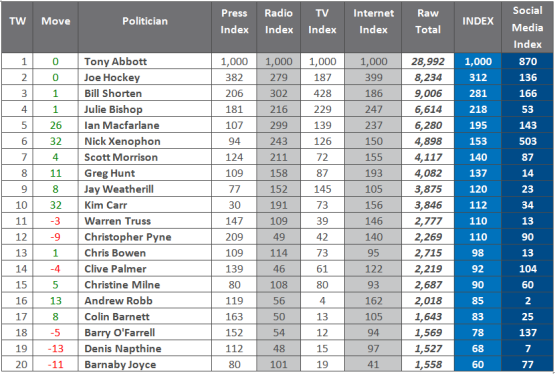 It’s always popular on talkback radio to call for “fat cats” to be sacked, but to be fair the response to Nick Xenophon was far more nuanced than that, with plenty of criticism going both ways.

Prime Minister Tony Abbott was totally dominant as furore about the education flip flops subside, with the social media types not getting deeply in to the Holden or Qantas debates. The young lefties just don’t care about our national bloody icons? Well, you may say that.

Ok, we are cheating a bit here, because technically Mandela was a politician. But he was clearly so much more than that. Many will be watching to see how modern South Africa, of which he is the father, fares over the next few years.

Why is everyone so afraid of Adani’s Carmichael mine?

Essential: Labor (finally) into the lead — and we don’t care about Schapelle