Will Australia have to give up more of the Timor Sea after being caught spying on Timor-Leste? Our foreign affairs expert visits the fledgling nation to gauge reaction to the spying revelations. 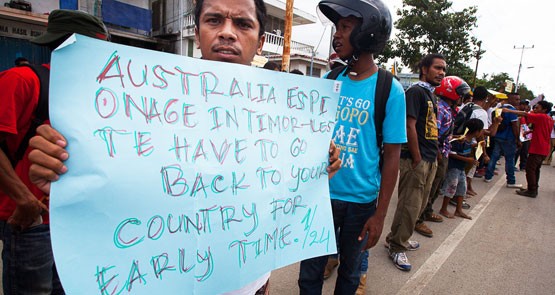 Australia and Timor-Leste are in a diplomatic lull following the revelations that Australia spied on Timor-Leste’s cabinet via agents working through its aid program. Prime Minister Xanana Gusmao is in South Africa for the funeral of Nelson Mandela, who had visited him in prison in Jakarta and thus helped elevate his international status.

But one senior minister, left to mind the shop, chuckled quietly. By spying on Timor-Leste, he believes that Australia has provided the mechanism required to invalidate the unequal Timor Sea treaty between the two countries.

There is official insistence that Australia and Timor-Leste remain close friends, despite the occasional angry comment. This particular dispute, the Timor-Leste government believes, should remain quarantined from the wider relationship.

Australia’s official perspective is similar, with ambassador Miles Armitage taking a soft line towards recent demonstrations outside the Australian embassy. He was dismayed by riot police over-reacting and firing tear gas at a small group of protesters, also gassing ordinary police who had the situation well under control.

But it is not as though spying in Timor-Leste is much of a secret. One minister privately joked that the Chinese-built foreign affairs building is full of listening devices. And then there is the Chinese-built presidential palace and defence forces headquarters.

Australia is far from alone in its close interest in the Timor-Leste government. It is also far from alone in keeping tabs on the other representative offices here. Embassy row, along the seafront west of the town centre, boasts compounds that would look impressive in much larger capitals.

The substantial presence of China, the United States, Australia, Indonesia, Japan, Russia, Portugal and the other Lusophone states — Malaysia, Thailand, Singapore, New Zealand — reflects Timor-Leste’s strategically important location astride oil and gas fields, a critical submarine deep sea route between the Indian and Pacific Oceans and being in the middle of the world’s largest archipelago.

Yet in its 24-year struggle for independence, the Timor-Leste guerrilla army’s intelligence network surpassed even that of the notoriously extensive intelligence network of the Indonesian military. The old networks, like the old clandestine names — of which Prime Minister Xanana, President Taur Matan Ruak and parliamentary speaker Fernando Lasama are but a few — remain intact.

Information — about everything and everyone — always has been and remains the richest of prizes in Timor-Leste. To the extent that intelligence gathering activities have changed since Indonesian times, it is only their much greater scope that is different.

Professor Des Ball made the point recently that the ‘national security’ issue does not equate with governments working in collusion with transnational business interests.

Perhaps ‘Professor’ Damien Kingsbury might spin his contributions to Crikey towards a recognition of this ?