Has Australia caved in on the Trans-Pacific Partnership?

There are reports that Australia has given in to US demands for draconian copyright restrictions in Trans-Pacific Partnership negotiations, but the deal isn't signed yet. 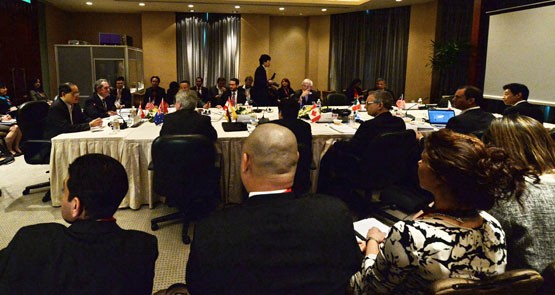 There was mixed news from Singapore yesterday evening as the current negotiations over the Trans-Pacific Partnership broke up without agreement — spoiling US hopes that a deal could be done before the end of 2013.

So far, so good, for what amounts to a remarkable attempt by the US government to impose draconian restrictions on intellectual property and the capacity of other governments to change policy, to suit US companies. But there are also reports that the Australian negotiating team, led by Trade and Investment Minister Andrew Robb, has caved in to US demands on intellectual property. Yesterday the US industry publication Washington Trade Daily told its subscribers, citing “participants familiar with proceedings”, that:

“Australia, New Zealand and Canada, among others, dropped their objections to the high-standard disciplines in intellectual property and came on board by agreeing to the modified text. Effectively, there is consensus on the intellectual property dossier except for one developing country …”

In fact the key debate on intellectual property, according to WTD, is no longer about resisting the demands of the US copyright cartel, but the transitional period for developing countries for the new requirements, with debate about how exactly the transition period will be measured for developing countries. “A final pact can be concluded after another two or three rounds,” WTD reported.

If Australia and other key players have acceded to US demands on IP, this represents a potential nightmarish imposition of new restrictions on copyright and pharmaceuticals. The US is demanding an extension of the already absurd 70 years copyright protection (basically designed to protect Mickey Mouse) and the criminalisation of filesharing and the requirement for ISPs to surveil their customers to enforce copyright, as well as extending protections for pharmaceutical companies to prevent the use of generic versions of medicines.

The report contrasts with evidence earlier this week via leaks to WikiLeaks and Huffington Post that Australia was holding the line on a number of the more draconian US copyright demands. “Australia in particular is standing firm,” Forbes reported based on the leaked document.

Yesterday ministers reported “substantial progress” after four days of negotiations in Singapore that “identified potential ‘landing zones’ for the majority of key outstanding issues in the text”, but there was no agreement. They will meet again in January. The US had been hoping for a treaty to be finalised by the end of this year. Any agricultural concessions the US makes (which are said to be driving Australia’s willingness to accede to US copyright demands) will be sensitive the closer we get to US congressional elections in November.

The US has demanded that participating countries keep the draft text secret while providing US corporations and industry groups like the copyright cartel have been given full access to the text, much more so than US senators. Those requirements have been slavishly followed by the Department of Foreign Affairs and Trade, which has even excluded journalists from its pro forma “consultation” on the proposals. The government this week ruled out allowing the public, rather than corporations, to see the text before Andrew Robb signed up to it, meaning we may not know that Robb and DFAT have caved in on intellectual property until we’ve already signed on.

The TPP really has to be stopped. Copyright law is already beyond a joke. 70 Years Plus Life (or 95 years for group projects) benefits no one but big corporations like Disney. If the Abbott Government has agreed to these idiotic requirements made by the USA, then all I can say is I hope voters in this country are happy that they’ve just been sold down the river. Local governments will be sued for the inconveniences they might impose on big, off-shore corporations. ISPs will be in a never ending cycle of lawsuits over Copyrighted content. Pharmaceutical products will increase in cost exponentially. VPNs will most likely be outlawed, since they’ve already stated they want to clamp down on evading Geo-blocking (something which the previous government was saying should be freely endorsed).

The most heinous crime of all is that this agreement is being negotiated in almost total secret (unless you happen to be a wealthy IP holder from the sounds of it). The first we’ll hear of just how bad things will be from now on will be when it’s already too late to stop it.

Spot on Tristan Wilson. A pity it has to be lefty publications like Crikey and someone like Brian Toohey whom neophyte Liberal MPs probably regard as too far left that brings attention to this scandal.

Of course the idiot Garrett went even further than the bad advice he had received to set up a useless but damaging and costly but avoidable Resale Rights Royalty scheme for the visual arts on the lines of already excessive Copyright. (Excessive? Just think about it: even before Disney got its way with the country boy – Mark Vaile – in 2004-5 Copyright, a gift by citizens through their legislators of a valuable right which doesn’t otherwise exist, copyright extended for much longer than the monopoly give to people who benefit millions with their new drugs or ways of saving petrol.).

What’s to be done when Attorneys-General turn out to be authoritarians under the skin – and ignorant of IP law which is forgivable until they turn their brains on and ask for help from someone who isn’t earning his keep out of maintaining IP monopolies? But…..

Maybe this is the big problem. Mark Vaile might have been an obviously bad choice, though not stupid, to negotiate Free Trade with the Americans but Andrew Robb one might have thought of as a bit more sophisticated. But….but… did anyone hear him on the radio after he had just blown the government’s line on bugging the Indonesian President? He sounded as though he was barely coping with the strain of just talking to inquiring journalists. Is he up to it or are we going to find that his depression problem is reviving and we are going to be sold out to the Yanks because he hasn’t the mental strength and stamina to deal with them? (What is wanted is a Malcolm Turnbull with the add-on that he is seriously listening to people who, just occasionally know more than him or have thought about something in greater depth).

A shame if we go on stuffing these things up when there are plenty of people in the federal parliament on both sides who have the raw IQ material for getting difficult things right. A pity too many haven’t seen much of the world outside politics and now spend too much mental energy and time being users of Facebook, Twitter, YouTube and all the other time consuming ways of sounding bright and contemporary.

FFS the US has never ‘led the way’ on copyright. It was a latecomer to the Berne Convention and now wants to drive a truck through well established rights of user. We should not budge an inch from our existing regime without careful consideration by all persons affected.

What kind of utter bullsh*t is this ‘confidentiality’ crap ? Why should proposals which affect so many people be confidential ?

If ISDS are to proceed it will be one of the biggest betrayals of this government. Both Howard and Labor realised early on that there was a risk in allowing corporations to influence national policy.

It speaks volumes that corporations are allowed to see the draft text but ordinary citizens (voters) are kept in the dark. The corporatisation of government continues to it’s extreme end.