The death of Nelson Mandela this week reminded us of how far we have come. But there is still much work to be done. Our proudly Sydney-based writer reviews the week ...

Reflections on Mandela. I have felt like everything is about to change (and not necessarily in a good way) for a long time. I thought the GFC might be the trigger, but somehow we managed to cobble things back together. I don’t think we actually fixed anything, but we’ve staved off disaster, at least for now.

Some things, however, are a great deal better than they used to be, and the death of Nelson Mandela this week reminded us of how far we’ve come. The great work of the latter half of the 20th century may well have been the slow acceptance by most people — at least intellectually — that all of us are created equal and the colour of our skin is not a defining characteristic. (We may still have a little way to go on gender, what with this week’s flurry of articles on how women and men’s brains are supposedly wired differently. I will not dignify such tosh by including it here.)

The loss of Mandela, the great warrior for racial equality, reminded us of the good work he and others have done, and even through our grief, it remains inspiring to celebrate not just a life exceptionally well-lived, but real progress. The New Yorker nailed it … 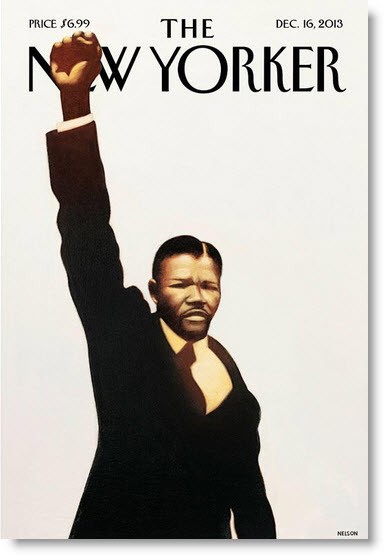 But, progress or not, I can still hear the ghostly clatter of tumbrils in the distance — they’ve been haunting me for a while now. That, or, as David Simon, who created the (outstanding) series The Wire, put it in a quite remarkable speech, the subtle clink of someone picking up the first brick. Then @JuliaBaird highlighted a New York Times article about homeless child Dasani. Let’s hope Dasani becomes the kind of person she dreams of being, not the picker-upper of that brick.

Celebrating teachers. Maybe Dasani will meet a teacher like Ms Pierson who features below. My great hope for the future lies in teachers like Pierson, particularly when she lets us know how teachers cope with the continuous, ill-informed, arrogant attempts to tell them how best to do their job by pointing out that “we listen to policy that doesn’t make sense and we teach anyway … We teach anyway.”

Not that Australians have any right to feel complacent, not with Programme for International Student Assessment comparative results yet again reminding us that we are leaving many children behind. This was a helpful suggestion to Education Minister Christopher Pyne on how he could better communicate his — ahem — vision  … 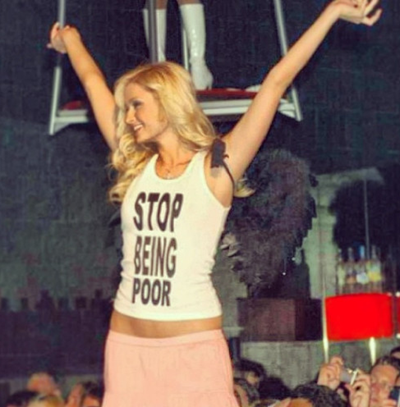 Sydney from the inside. These perspectives on how the different parts of Sydney see one another are worth looking at. I live on the North Shore (sorry, I know this will disappoint a great many people who for reasons unknown to me often assume I live in Melbourne!), variously designated as the “Fatherland”, “Tony Abbott Land”, “Mordor” and “Rich Anglo Brother”. 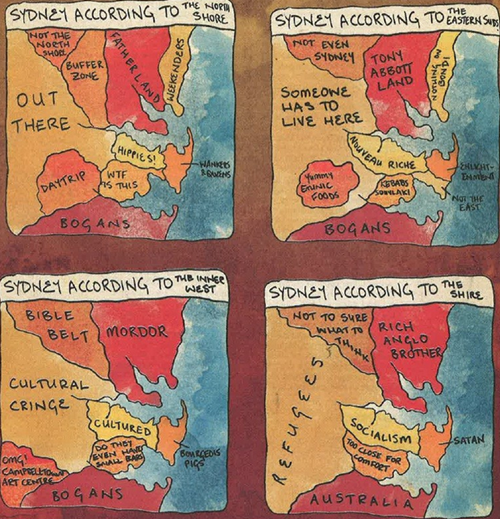 Then my Springwood-dwelling, Emu Plains-teaching sister reminded me (a little curtly) that the Western Suburbanites had been left out of the picture yet again and @darkhorizons immediately sent me this: 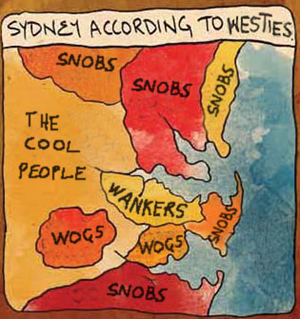 Wherein the North Shore — like much of the rest of Sydney — is airily dismissed as simply “Snobs”.

Media reviewed. The week also brought this wonderful, narky, bitter and witheringly accurate piece about an alarmingly self-congratulatory editorial in The Australian. Among many spiky gems, I particularly liked this analogy:

“It’s like a mosquito trapped in amber, but instead of a mosquito it’s a 60 year old man having the new photocopier explained to him before angrily asking what was wrong with the old photocopier.”

The idea of the Oz as a kind of fist-shaking Grandpa Simpson amused me enormously.

My tweet of the week goes to the indefatigable @Mr Denmore for this melancholy little ripper:

Advertising ruminations. But I finish the week’s beach-combing with two rather hopeful signs. The first is an ad of all things, for Pantene of all things, from the Philippines of all places. When feminism starts to infiltrate corporate advertising, you know it’s becoming mainstream …

I once wrote an ad campaign for Stayfree that never got produced, even though it won my agency the business. My ads were built around the campaign idea that Stayfree believed women should always be well-protected. My art director and I wrote scripts featuring a quick self-defence lesson for use at ATMs, how to protect yourself from the sun and how to deal with sexist remarks. We suggested that if a guy yelled out “show us your tits”, the response should be: “Oh, you poor thing, haven’t you ever seen any before?” This lovely article continues that fine tradition. As I’ve often said, after diamonds, wit is a girl’s best friend.

And this just in …

Absinthe bars and poetry dens: should we bring inner-city living to the outer suburbs?

Hitting back at housing density in Sydney

Thank you for what you bring to Crikey. I love your stuff.

The only issue that I take is with the brain sex thing. It is great to see that the sexism issue can negate the inconvenient truth of science. This displays a disposition for dogma rather then reasoned thought.

Additionally the brain sex issue actually supports the contention the an environment with both sexes is better than without due to the differing abilities.

But Jane you still believe in nurture over nature

@Mark Haskin our West
Interpretaion of “the brain sex thing” is highly contentious among scientists. The differences claimed are not yet a “truth”, inconvenient or otherwise.

Salamander
Sorry it is not contentious, it has been proven via MIR scans & behavioural studies.
Even if you acquainting yourself with studies (New Zealand) with children who are considered with indeterminate sex and often due to their small genitalia prescribed female. These children will determine their sex as they grow often choosing their sex (male). Join the dots nurture over nature is dead and deal with reality.

You’re jumping the gun there big time, MOW. We’re talking about science here – not a matter of opinion, but of a solid body of evidence that has survived the challenges of sceptical scientists testing alternative hypotheses and interpretations. Such a body of evidence doesn’t exist. Sorry.
And intersex children have not been studied in this context as far as I know.