Why the silence over spy whistleblower? ... privatising public uni services in Qld ... meet the dog running at the Tas election ...

Spy games. A reader had a question over recent allegations that Australia spied on East Timor over oil and gas negotiations. A retired spy was due to give evidence in the case before the international courts, but the spy’s passport was cancelled by the Australian government. The spy has not been named by the media.

“Why is there a deep silence about the fate of the former ASIO Officer who was going to help the Timor-Leste case? Is he being held under the provisions of the Terrorism Act, 2006? This prohibits the person from saying anything about his detention and anyone else, including the media from doing so. It also allows him to be detained for seven days at a time ad infinitum, without benefit of judicial review. This is another instance of the erosion of Australian democracy.”

The short answer is no. The retired spy is not in custody, but the spy’s passport has been revoked. It’s illegal to name an ASIS officer under the Intelligence Services Act, which is why you haven’t read the spy’s name. Recent raids related to the case were conducted under the ISA, not the Terrorism Act (which would have required AFP involvement).

Vet concerns in Qld. We’ve heard this from “a concerned veterinarian”, about James Cook University (a public uni with its main campuses at Cairns and Townsville):

“I wish to bring to your attention an issue that is of deep concern to the independent veterinary community in Townsville and to those interested in the independence and professionalism of university education in Australia. The issue is the ‘secret’ negotiations for privatisation of veterinary education and referral services for the veterinary school at James Cook University. JCU is  negotiating a deal with Greencross, a veterinary company that is rapidly growing by the purchase of multiple practices. This may set a precedent for Australian tertiary education.

“We understand the JCU veterinary school has an annual budget shortfall of about $2 million. The vet school is seeking to redress this by privatising the small animal emergency clinic, and the small animal specialist referral service. The first is operated for the benefit of the students, and also benefits the public, and the local vets. It relies on the goodwill of the local vets for its cases, which are in turn used for student education in the later, clinical years of the vet degree. The latter service is used to teach final-year students high-level clinical skills.

“JCU has decided to sell off both of these assets to Greencross Veterinarians, a large, listed company that owns many private clinics and related commercial enterprises such as pet shops, interests in veterinary drug wholesalers, private specialist referral clinics etc.

“There was no tender process and no public consultation. The local veterinary community met with JCU on November 22, where it was stated that the deal is not finalised; that there would be no tender process; that there would be no public consultation; and that the deal was at the stage of due diligence. Local vets are shocked and outraged at the change to tertiary education, allowing corporations with specific competitive agenda to teach our professionals; they will be learning from those whose primary motive is profit.”

We’re used to Australian unis devising dodgy academic practices to fleece international students and over-charge domestic students for low-quality courses, but selling off services to private companies might be a new one. Is this really happening? A JCU spokesman told us this:

“The University has had discussions with Greencross and consulted other veterinary practices in the region concerning the future of the Veterinary Emergency Centre and Hospital (VECH) on our Douglas campus. VECH is a separate entity to JCU’s School of Veterinary and Biomedical Sciences although discussions have touched on how accessing the caseload across the network of Greencross vet practices and hospitals could support the teaching of our vet students. As you would expect some of the discussions are commercial in confidence.”

So yes, it seems there is some truth to our vet’s complaint. Is this kind of practice widespread in our ailing and underfunded public tertiary system? Academic moles can let us know here.

The Oz v the ABC. If News Corp dislikes the ABC so much, why is the ABC one of its clients? This from the website of News Custom Content (that’s the client publishing division of NewsLifeMedia). It’s listed under “ABC: the client“.

No alcohol please, we’re at the racing. Which “well-known race-caller” has been suspended for boozing while in the broadcast box, according to 3AW? We thought it was mandatory …

Next GG. Yesterday we aired a tip that South Australian lawyer John Doyle might be the next Governor-General when Quentin Bryce steps down in March (military man Peter Cosgrove is seen as the frontrunner; Tony Abbott has hosed down talk it might be John Howard). We asked you for more inside information, which elicited the following silly-season responses:

“David Flint. Then perhaps he’ll get some gongs and a professorship. And we’ll NEVER become a republic. And I’ll have to leave the country. It is going so Orwell that perhaps I should anyway.”

“It will be a woman from a non-English speaking background (Labor would find it hard to knock such an appointment). Step up Sophie Mirabella!” 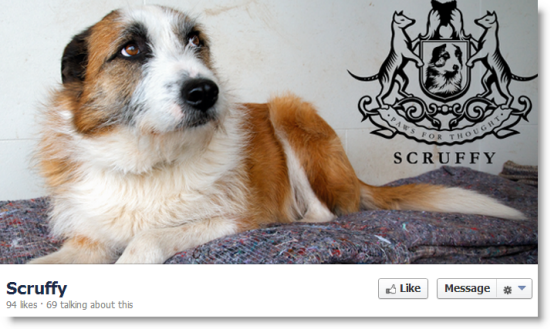 Scruffy lives in the charming northern hamlet of Chudleigh and will run for Parliament under the slogan “Voting for a dog, vote for a real one”, according to this profile in ratbag online publication Tasmanian Times. Found “a waif and stray in Deloraine, of mixed yet unknown parentage”, Scruffy has a personal Facebook page and fan base.

The Tasmanian Legislative Council has rolling single-member elections; we’re not sure which electorate Scruffy is targeting. We’d like to know if an animal can stand at an election in Australia, or is that illegal? And if you have to be enrolled to vote to stand for election, is there any law saying a dog can’t enrol to vote? If you’ve watched Tasmania’s prehistoric and wacky Leg Co in action, you’ll see no reason Scruffy couldn’t join in.

Scruffy would not be the only non-human political figure. Stubbs the cat is honorary mayor of the Alaskan town of Talkeetna, and has 34,000 followers on his Facebook page. This year, Morris the cat ran to be mayor of the Mexican city of Xalapa; he got thousands of votes and came fourth out of eight candidates (Morris is currently running a tribute to Nelson Mandela on his Facebook page). Scruffy has just 94 Facebook likes — but that’s probably more than any Tasmanian Legislative Council member.

There’d be no war with the ABC if it just knew it’s place, confining itself to anything but politics – and leave that to Murdoch’s Limited News (where news comes second) Con-troll freaks to “spin it like it is”.

Stay with the name “John Doyle”, but a better choice would be…..

Scruffy Hawkins would be remembered as the most honest candidate in the history of Federation.