Woolies reckons Aldi rips off name-brand products. But it should look at its own shelves first. Crikey's business editor reports on a new code of conduct that could shake up the supermarkets.

It is hypocritical for Woolworths to attack Aldi for infringing the intellectual property of leading brands, and unfair to use this argument to pressure a rival to sign up to the food and grocery industry’s new code of conduct, which Aldi had no input to.

OK, Aldi does make an hilarious art form of ripping off packaging. My favourite is Saint Etienne, which looks just like Stella Artois but sells at Aldi for $29.99 a case. I haven’t bought it yet — misguided loyalty — but I’m sure it tastes exactly the same. 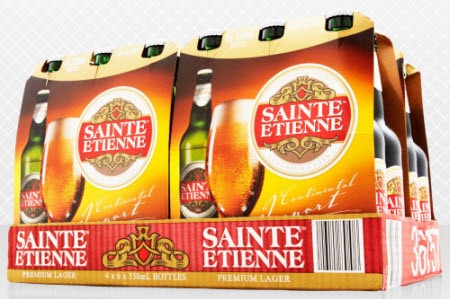 The major supermarkets are equally guilty, however. Earlier this year Craig Reucassel did a story called “Copycat” for ABC’s The Checkout program, showing how Coles and Woolworths were jazzing up their home brands into private labels by copying the packaging of successful brands like Grainwaves, Crunchy Nut Corn Flakes, Bounty, and even the Cancer Council’s sunscreen — undercutting the non-profit body’s key fund raising tool. “How can you?” Reucassel asked the supermarkets, plaintively.

The tactic does work to confuse shoppers. A chef mate, Jo Cook, who has been in the food business for 22 years and is a slow food advocate, was gutted to find she had brought a tub of Coles home brand ice cream to our place for dinner by mistake — not out of snobbishness, but because she tries to support small, quality producers. She had meant to buy two different tubs of Maggie Beer:

“Sometimes I buy ice cream, when I’ve missed the Farm Gate market or I haven’t felt like making my own. It’s a complete drag because there isn’t a brand that has real ice cream ingredients — i.e. milk, cream, eggs and sugar — they all have emulsifiers and vegetable gums and that’s the premium brands as well. In the supermarket when I just wanted to grab quality ice cream and get the hell out they were next to each other and I swear the vanilla bean was a Maggie Beer product too. I would never buy Coles homebrand.” 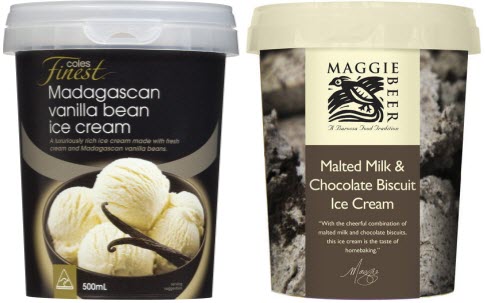 Protecting brand IP — not just packaging, but the formula or recipe — is a real thorn in the side of the industry and establishing a dispute resolution procedure is one of the key planks of the code of conduct, dealt with under section 9 — “retailers own brand products” — which provides inter alia: retailers will not infringe supplier’s IP rights when developing own brand products; if suppliers disclose confidential IP to a retailer, it won’t be misused and will only be disclosed internally on a “need to know” basis, and; retailers will not make suppliers hand over their IP as a condition of stocking their product.

The code will be enforced by the Australian Competition and Consumer Commission and will be binding on the two signatories — Woolworths and Coles — once it has been considered by Treasury, which is preparing a regulatory impact statement, and is been gazetted into law mid-next year.

The code is the culmination of 18 months of effort after then agriculture minister Joe Ludwig and assistant treasurer David Bradbury brought together Coles and Woolworths, the Australian Food and Grocery Council and the National Farmers Federation. The supermarket wars were escalating after Coles launched $1/litre milk on Australia Day in 2011.

Woolies and Coles, with as much as 70-80% of the grocery market, have been pressuring rivals Metcash, Aldi, and Costco to sign up to the code — even though they weren’t involved in developing it.

By the same token, the AFGC says the smaller supermarket chains did not ask to join the code negotiations and they weren’t deliberately excluded. It’s just that all the focus was on Coles and Woolworths. The AFGC hopes all retailers will sign up — “the more the merrier”, a spokesman said — but any negotiation will have to be on the basis of the existing draft which it is “very happy” with.

A Woolworths spokesman this morning said the code was “currently with government for review and can be amended if [the other retailers] chose to engage and negotiate with the AFGC and other parties and have particular concerns that need to be addressed”.

Woolworths denied it was hypocritical to attack Aldi for infringing on brands’ IP: “We have agreed to specific terms in the code indicating our good faith and intent on these issues.” Aldi was formulating its response this morning but it’s unlikely to take the latest attack lying down.

I don’t go to Wooolies intentionally. (My own protest against pokies / food labelling / ripping off farmers.) I am still trying to find out what shops they own – which I know include Dan Murphy’s. I bought petrol a few months ago thinking I was in a 7/11. I didn’t know I was in a Woolies service station until I looked at the docket. THe colours of the service station were very similar to 7/11. Or am i just unobservant?

The only home brand product I touch is Coles soda water – its only competitors are major players Shweppes and Kirks therefore there’s no conflict with the smaller private brands.

In general the shelves are becoming increasingly stacked with home brand products sacrificing choice for the consumer. They are treating/herding us like sheep.

A pox on Woolworths, a merrier band of ripoffs I have yet to meet. I made a comparison of Woolworths and Aldi over several years and have found that I save over $100 per week by shopping at Aldi. I don’t know how they do it, I don’t care but am so sick of being ripped off by Woolworths that I couldn’t give a damn if they went broke.

There was a report by Choice (I think) that demonstrated that Woolworths have a 75% Australian content while Aldi have 90%. In addition, the suppliers of Aldi get paid promptly while those to Woolworths don’t and let’s not get started on Woolworths’ treatments of our primary producers! All in all, I reckon that Aldi is more Australian than Woolworths in their treatment of their stockists, their staff and their customers.

The St Etienne is pretty good. Don’t be seduced by the Rivet though. It’s horrible.

GOS, I am with you.In my suburb there are two woolies in close proximity and 1 Aldi directly opposite one of the W’s.
The prices at the W close to Aldi are noticeably cheaper than the W a distance, proof that competition works where the competitor is Aldi. Also, W’s fruit and veg is crap. I recall buying tomotoes and they lasted a day at home before starting to rot. Aldi always lasts a lot longer at home. Also, Aldi don’t have self service; I won’t support a store that actively plots to get rid of staff (although the staff have been sold the line it doesn’t take their jobs-don’t know what they think happens on Sundays and late at night). There’s plenty of room in the market for all. Revolution now!