They do, at least for a week: your invite to Australia’s first gay marriages

Gay couples in the ACT are nervously awaiting a decision on whether their historic new unions will stand. Farz Edraki attended some of the country's first same-sex weddings for Crikey. 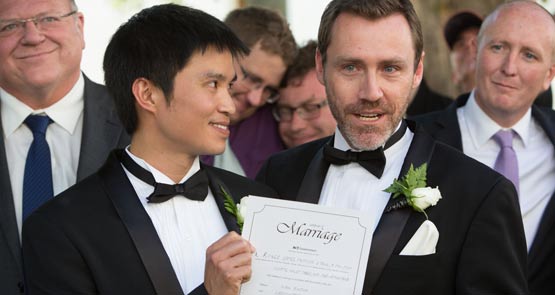 Ivan Hinton and Chris Teoh after their marriage ceremony on Saturday

“I now have the greatest pleasure to announce that this couple is legally married,” cries celebrant Judy Aulich to a chorus of cheers.

Rings are exchanged; the bride leans back for a kiss; more cheers, wolf-whistles and clapping. It could be just another backyard wedding in the quiet, leafy suburb of Giralang in Canberra’s north.

But as Aulich is quick to remind everyone, this is no ordinary marriage ceremony. A swarm of reporters and cameramen jostle around the couple and their family to catch a glimpse of history — the first lesbian couple to legally marry in the ACT.

Hayley Wilson and Samantha Harmes were one of many gay couples to get married in Canberra, after the ACT became the first jurisdiction in Australia to pass same-sex marriage laws in October. All eyes are now on the High Court to see whether it will invalidate these marriages, after the federal government mounted its legal challenge to the ACT legislation.

The federal government — and ACT Liberal politicians like Jeremy Hanson, who has been a vocal opponent of same-sex marriage laws — are hoping to convince the High Court bench that the newly minted legislation is incompatible with federal marriage law. After hearing both sides of the case last week, the High Court pushed back its decision until this Thursday.

Couples had five days after the ACT’s laws came into effect last Saturday to get married — with the looming legal challenge giving new meaning to the phrase “it’ll only last a week”.

Despite the uncertainty, some couples jumped at the opportunity to wed. West Australian Labor MP Stephen Dawson was the first to get married at a strategically placed ceremony outside Parliament House just after midnight on Friday. About 20 other couples took advantage of the five-day window to get hitched around Canberra: at the National Arboretum, Old Parliament House, Carillion, Gungahlin Community Hall and in the backyards of ACT celebrants like Aulich.

Given their marriage certificates could soon become legally worthless, why would these couples take the risk?

“We wanted to make [a] commitment to each other, whether it’s today or five years down the track for it to be all legal,” Harmes told Crikey. “To be part of such a massive day and among the first to make a stand for marriage equality — it’s just something we all felt strongly about and wanted to be a part of.”

For many couples it was important to get married, regardless of what the High Court rules on Thursday. “Worst case scenario, we get five days and we don’t have to hand our certificate back; we get to keep it and we become part of history,” Harmes said. 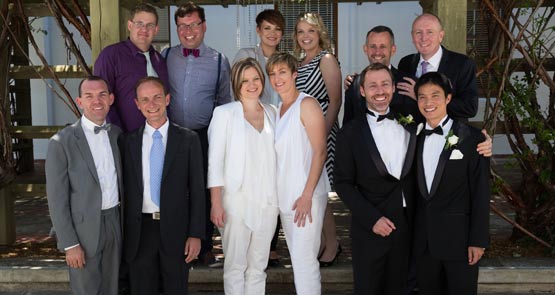 It was a sentiment shared by other gay couples who walked up the aisle. For Michelle Stockwell and Annabel Scholes, the High Court’s decision won’t change the commitment they made to one another.

“As far as we’re concerned, we’re now married,” said Stockwell. “From our point of view, nothing can change what we’ve done here this morning.”

After dating for almost a decade, getting married was a long time coming — made longer by the law’s reluctance to accept their union.  “We put our deposit down three years ago thinking the law would change a lot quicker … it does feel like a long time. For not just us, but for all the queer people in the world, in history.”

Not everybody was as keen to tie the knot in the uncertain legal and political climate. Aulich told Crikey that many of the couples she has been in touch with have decided to delay their weddings until after the High Court decision — with one couple pulling out over the weekend.

Brendon Condon and Chris Condon (who coincidentally share a surname) had been keeping tabs on the progression of the ACT’s same-sex laws to see when they could get married, after having a civil union earlier this year.

“I was involved with the Canberra first 50 project [a group that committed to being the first 50 married in the ACT] … we were watching it for a couple of months and we all knew it would go ahead this weekend,” Chris said. But Brendon expects a tough road ahead: “I think if the High Court strikes it down it’ll still be going through the courts.”

Darlene Cox, a marriage equality advocate who married her partner Liz Holcombe in Canberra’s National Arboretum, also conceded it would be an uphill battle. “What we want is to have marriage to include any consenting adult who wants to marry. This is going to take a long time,” she said.

“But at the moment, we’re delighted to have marriage equality. Over time, things will change. It may take a long time for things to change, but it doesn’t matter; things are happening.”

And if the High Court rules the ACT’s same-sex marriage laws as invalid? “We’ll be disappointed, but we’ll also get on with our lives and will be OK — and who knows, it might be another opportunity to get married.”

In the meantime, these couples can enjoy a rare moment of post-wedding bliss, with most plans for honeymoons kept brief.

“[They] have been marginalised for such a long time and now all of a sudden they can do what everyone takes for granted,” said Aulich.