The traffic jam on top of the world: the Chinese boom busts into Tibet

A construction boom and Chinese tourism has transformed the road to Lhasa. The way to Shangri-La is now congested with Tibetan truckies, migrant labourers and 4WDs. Journalist Michael Woodhead reports from Kangding. 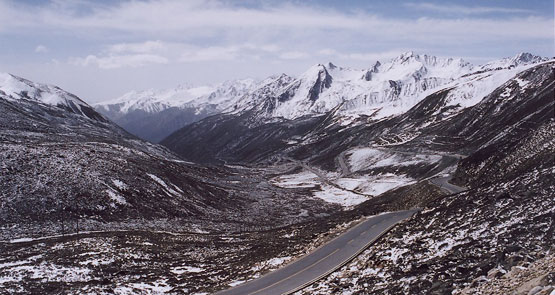 It must be the highest traffic jam in the world. It’s gridlock on Highway 318 at over 4000 metres above sea level (pictured above), just outside the Tibetan border town of Litang. In a two-kilometre tailback, trucks, buses and Landcruisers sit idling for hours on the main Sichuan-to-Tibet road as work crews upgrade the steep switchback dirt trail into a two-lane tarmac highway. The work is long overdue to cope with the huge increase in traffic to Tibet as “Shangri-La” experiences a boom in tourism and construction.

The road starts in Kangding, the traditional border town between the Han Chinese lowlands of Sichuan and the Tibetan plateau. This used to be known as the “Tea Horse Trail”, along which heavy loads of tea were carried up by porters to be traded for Tibetan furs and wool. Nowadays, you’re more likely to see Tibetan traders browsing in Jeans West or sizing up the latest iPhones in Kangding’s Apple store. Tea is still traded here, but mochas and fruit smoothies are now the preferred beverage for many young Tibetans.

On the surface, race relations seem good despite recent “disturbances” and self-immolations by Tibetans in the Garze district. Han Chinese and Tibetans mingle on Kangding town square every evening, dancing to traditional folk music played on a huge public video screen. At the nearby Anjue Buddhist monastery, authorities tolerate a large portrait of the Dalai Lama, around which local Tibetans have placed prayer candles and wads of Renminbi. Young Tibetans are avid watchers of Chinese soaps on TV. Below the surface, however, tensions remain. Scuffles break out on the street between Tibetan taxi drivers and municipal government inspectors, swiftly drawing hostile crowds. A brittle calm is restored after police haul the offenders away in a van. 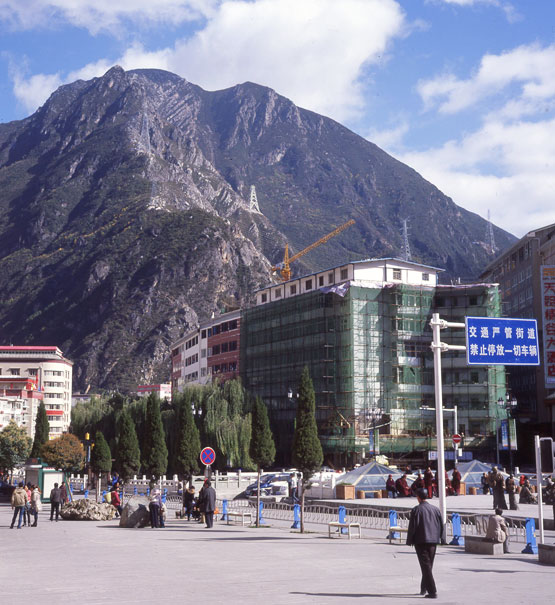 Differences between the races are also highlighted on the rocky crags that tower over Kangding. The Tibetans paint colourful Buddhist frescoes on the cliffs, while the Chinese have put up electricity pylons and mobile phone towers. On the windswept plateau above the town, Tibetan characters for “om mane padme hum” have been carved on a hillside. Next to them, a Chinese advertising billboard spruiks the new Kangding Airport.

Infrastructure construction is evident everywhere along the Tibet highway — new tunnels and bridges, upgraded roads and houses. The sleepy backwater town of Luding used to be known for a battle waged by Mao’s long marchers for its ancient bridge. Now the town is overshadowed by a massive hydro-electric dam and a large new lake that’s already choked with garbage. In Kangding the ramshackle “old town” is being razed and supplanted by a completely new Hong Kong-style town of high-rise apartments. 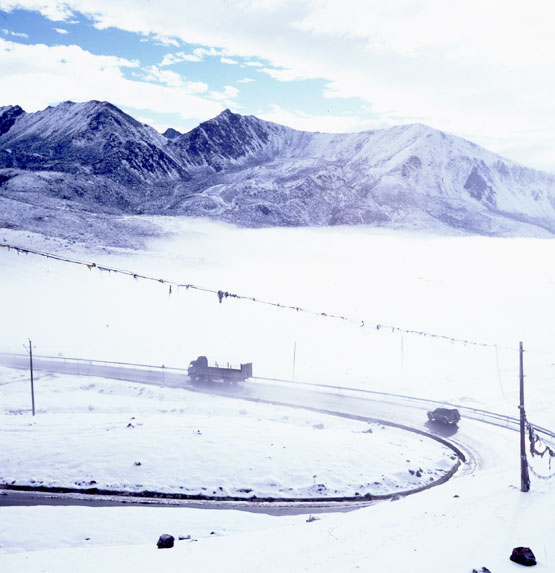 All this construction requires a workforce and supplies, and Route 318 is a constant nose-to tail stream of trucks bringing migrant labourers and materials up from Sichuan. Gone are the basic old Jiefang (Liberation) trucks, replaced by hulking 10-wheeler Foton heavy transporters, overloaded with everything from huge concrete pipes to white goods. The Tibetan truckies decorate their windscreens with photos of their revered living buddhas, whereas Han Chinese drivers prefer Transformers stickers.

But the trucks are being overtaken — literally — by an increasing number of late model Landcruisers and Range Rovers on the roads, driven by the new breed of Chinese adventure tourist. Clad in pristine North Face gear, the new Chinese middle classes are heading out into the wilderness en-masse, wielding their DSLRs and walking poles. Kham is now prime vacation territory for those seeking an escape from the overcrowded and polluted lowland provinces. These are not the coach-bound tour groups with matching baseball caps following a leader with a megaphone; many of the new Chinese tourists drive their own cars and travel independently. Younger Chinese can be seen hitching on the edge of towns, or cycling up and over the gruelling 4500-metre passes on the way to Lhasa.

Tibetans are cashing in on this wave of tourism by converting their sturdy stone houses into motels, homestays and backpacker hostels. On the highland plateau beyond Kangding almost every house now has a sign offering accommodation, pony trekking and Tibetan food. It’s all in Chinese, of course, because the huge domestic market dwarfs the trickle of Western tourists travelling the Tibetan highway.

Tourist numbers in the region are also being boosted with the opening of new airports such as Yading-Daocheng, at 4400 metres, one of the highest in the world. Several flights a day now disgorge visitors eager to experience the famous “three peaks” of Yading National Park. Supplementary oxygen aerosol canisters are on sale in the arrivals hall for those who have trouble acclimatising to the high altitude. 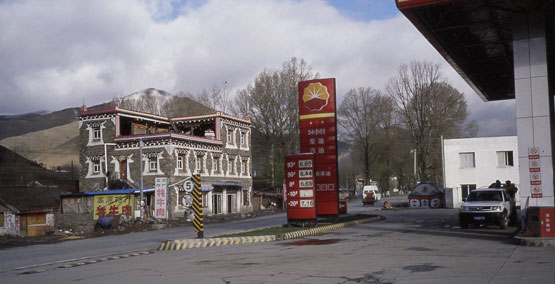 Ten years ago the Yading area was a pristine wilderness. Now local authorities have built a concrete road to the foot of the mountains, along which tourists are ferried in electric buggies. At the once remote Yading village, upmarket Tibetan-style guesthouses offer wi-fi and Yunnan coffee. The prices are steep, but there is no shortage of takers.

Back on the highway, traffic jams recur. A young Tibetan cop manning the roadblock looks up from his iPhone and flashes a disarming smile to the waiting drivers. “Roadworks … could be 15 minutes, could be three hours, who knows?” he shrugs. It gives a whole new meaning to the Tibetan greeting: “Tashi delay”.

*Michael Woodhead is a Sydney-based journalist. He has visited China and Tibet on a regular basis since the 1990s and is writing a book about the botanist-explorer Joseph Rock, who lived in the Kham region during the 1920s.

Michael – thanks for this exposition. As an old himachel fogey, it is just another Leh/Ladakh or Swat redux.
Shiva must be rilly, rilly pissed off.

It seems the tourists flooding into Tibet have left it too late.