Do smarter people drink more? ... The cost of an over-educated nation ... Qantas and its foreign affair ... A toast to culture and diversity ...

Do smarter people drink more? As the annual end-of-year wowserish warnings about the evils of alcohol reach a crescendo, it’s thrilling to discover new scientific evidence that people who drink are, in fact, smarter. A reporter at American magazine The New Republic has amassed real, scientific research to show a positive correlation between intelligence and alcohol consumption. For instance, researchers at the London School of Economics have found a link between educational attainment and daily drinking, especially for women.

Female university graduates were 86% more likely than women who hadn’t finished high school to admit to drinking on most days. But it’s not just those boozy Brits — according to the United States Department of Health, rates of alcohol consumption rise with education level, with 68.4% of college graduates describing themselves as drinkers, compared with 35% of adults without a high school diploma. In addition, researchers in Finland have discovered a strong correlation between early talking and drinking. After looking at data on 3000 sets of twins, they found that the twin who was the first to develop verbal ability also tended to be the first to try alcohol.

The article also presents the research of evolutionary psychologist Satoshi Kanazawa, who found that children who scored higher on IQ tests grew up to drink larger quantities of alcohol on a more regular basis than their less intelligent peers. Drawing on the results of the National Child Development Study, he found that intelligence before age 16 was second only to gender in predicting alcohol consumption at aged 23. So it’s official: higher alcohol consumption, as well as making you more attractive, is actually a sign of intelligence. You’re welcome.

The cost of an over-educated nation. A recent report on the declining maths and reading skills of Australian high-school students has triggered a predictable call for this country to emulate our Asian neighbours. The report from the 2012 Programme for International Student Assessment (PISA) showed that our students are slipping even further behind students from countries like South Korea, China and Singapore.

The research measured the mathematics, reading and science skills of half-a-million 15-year-olds from around the world. Among the OECD countries, South Korea took out the top place for maths and reading. Considering that 78% of the population was functionally illiterate at the end of WWII, this is a remarkable achievement. However, the Korean government is examining the philosophy of their education system. “Korean students seem to feel a lot of pressure because they learn maths to prepare for their university entrance exams rather than for practical use,” the Korea Institute for Curriculum and Evaluation has said.

In an article in online publication Quartz, journalist Matt Phillips has been looking at other aspects of Korean life. Among students in OECD countries, Korean students were the least content with their school lives, with only 60% responding positively to the statement “I feel happy at school”, he reported. A total of 85% of Korean parents expected their children to complete university (top of the OECD), while Korean birth rates were some of the lowest in the developed world — a figure which some people attribute to the expense and strain of the local education system.

All this means that when your child’s end-of-school results arrive in the next few weeks, it is time to sit back and open a bottle. If your children fail to shine at maths, at least they have a head start in life — they have very intelligent parents.

Qantas and its foreign affair. While ailing airline Qantas goes cap in hand to the government for special favours, it is worth noting how many Australian “icons” have fallen into foreign hands in recent years and are thriving. Victoria Bitter beer and Arnott’s biscuits (makers of Australia’s most famous biscuit, the Tim Tam) have become foreign owned while the Australian national spread, Vegemite, has been made by US giant Kraft for decades.  All have retained their essential Australian nature, and continue to be sold around the world.

Last week Qantas flagged losing up to $300 million this half year and suffered a dramatic downgrade by a leading credit rating agency. The Financial Times’ highly influential Lex column wrote yesterday that “direct downgrades from stable outlooks are rare. Call it the rating equivalent of not passing go and going directly to jail.” Qantas chairman Leigh Clifford has appealed to the government for help, saying “the airline industry is a little different, and it is vital to Australia that it has a national carrier that is available … and able to evacuate people [in times of crisis].”

This is an important test for the new government, which has just knocked back the Graincorp takeover bid by Archer Daniels Midland on ideologically shaky grounds. The FT columnist says Qantas’ foreign ownership restrictions, under which non-Australians cannot own more than 49% of the airline, are outdated:

“Australians must get over the idea that Qantas is better off without the option of foreign funds. Any foreign owner of Qantas would, to use the local lingo, have a few ‘roos loose in their top paddock if they thought that making the airline feel less like the spirit of Australia would be good for business.”

A toast to culture and diversity. Award-winning artist Liam Benson has a new exhibition at Sydney’s Artereal Gallery, entitled Same Same. Held in collaboration with Lucas Grogan, it proposes a toast to mutual R.E.S.P.E.C.T. Benson’s androgynous creations, featuring photographic self-portraits, celebrate difference. The binary nature of masculinity/femininity, homo/heterosexual, and white man/black man are common themes of his work. Same Same is fundamentally about acknowledging the magic of culture and individuals. 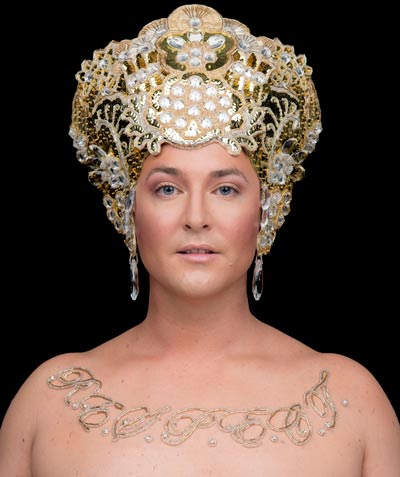 The artist is one of the key mentors in a groundbreaking arts and disability program entitled Hatch. This program offers emerging and established artists from all artforms the opportunity to work with disabled people and unlock their creativity. Graduates of the course have gained confidence, increased their life skills and in some instances found related employment. A worthy enterprise.