Nathan Tinkler got his start in a "dirty, mongrelly job" in a mine, but he didn't stay long in steady employment. Despite significant financial problems at home, he always had his eye on the big picture.

In late 1993, at the age of 17, Nathan Tinkler got his start as an apprentice at BHP’s Bayswater Coal open-cut mine five kilometres from Muswellbrook, now part of the massive Mount Arthur complex, the biggest thermal coal mine in New South Wales. “Like any apprentice, if you aren’t a self-starter you quickly learn to be,” Tinkler later told Master Electrician magazine.

Tinkler has described working as a mine electrician — a “pit leco” — as a “dirty, mongrelly job” — but he also noted that he “fucking loved it”. His colleagues from this time have varying memories. Some recall a smart, happy-go-lucky worker. Others reckon he was pretty lazy: he’d sneak the odd nap and was quick to knock off and head to the pub. Rumour has it he was given the nickname “Standby”. Tinkler had an arrogance about him, some have also recalled, a supreme confidence that he was destined for greater things — that he was going to be a multimillionaire one day. Fellow mine workers remember him reading the newspaper’s share pages during his smoko.

It was during his apprenticeship that Tinkler met Rebecca Blackney, whom he would go on to marry and have four children with.

When Tinkler finished his apprenticeship at the end of 1997, he was hired by contractor P&H MinePro to work on the dragline. At the end of 1998, as Bengalla was moving into production, mine owner Peabody started hiring operators for the coal preparation and handling plant

Tinkler applied for a job as a technician in the coal handling and preparation plant, sat the interview and got it. A member of the selection panel remembers Tinkler as smart, gregarious, someone who’d be a good fit.

To celebrate his new job, in November 1998 Nathan and Rebecca took the plunge on their first home. They got a mortgage from the Commonwealth Bank and forked out $148,000 for a decent-size home at 34 Cassidy Avenue, right across the road from the Muswellbrook showground. The couple were married soon afterwards.

After two years at Cassidy Avenue, with their first child on the way — as Tinkler later recalled, “Up the Valley we didn’’t get Austar and that back then, so we started early!” — the Tinklers sold up at a small profit and moved to Singleton, buying a house and land package at 6 Clydesdale Close, Hunterview, in March 2001. The land was worth $60,000, and the Tinklers borrowed $252,000 to build a four-bedroom Hotondo Home worth more than $220,000.

A sign of things to come, they didn’t pay their builder, Wayne Kempster. It became clear to Kempster that the Tinklers had considerably overspent their budget and had not cleared the extra costs with their finance company.

It took Kempster six months to his final payment, and extras worth more than $25,000 were still outstanding. He sued the Tinklers, and it would take another two years — a saga of numerous sheriff’s orders and rubbery cheques — before he got most of the money, in dribs and drabs. Even then, he finished up more than $2500 short.

In the middle of his dispute with Kempster, Tinkler lost his job at Bengalla. Apparently, Tinkler’s work ethic and attitude were becoming such a problem that he was moved from shift work to day work so that management could keep a closer eye on him. That meant he would lose his bonuses and take a pretty hefty pay cut.

And then he was gone altogether. “He was there one day and gone the next,” recalls one of the men who worked alongside him. At the age of 25, with a mortgage and two young kids, Tinkler’s steady job was over.

Tinkler wanted a job higher up the mining food chain but realised he wasn’t qualified for it. He toyed with the idea of going to university, but, as he later told BRW magazine, he felt he would “fail uni the same way I did high school … I was just not cut out for hitting the books”.

“Four years later, when he first topped the Young Rich List, Tinkler admitted: ‘I’m not proud of what I’ve put my family through to get here.'”

Tinkler got a job as an electrical field technician for DATEM Moore Technical Services, a family-owned contracting business near Singleton. Tinkler got on well with the company’s founder, John Moore, and his son Hayden, and was soon promoted to supervisor.

On April Fool’s Day in 2003, just before the mining boom began, DMTS was put into voluntary administration. In something of a rebirthing exercise, the Moores had decided a month earlier to set up a new company, Support Services Group, which Tinkler would run.

Tinkler’s own accounts of this period vary, and he has never mentioned the leg-up he got from DMTS. According to the Moores, Tinkler had a long-term ambition to develop his own mining venture, and they agreed that Support Services would be the cash cow, generating the money needed to invest in a mining tenement somewhere. The Moore Group would provide engineering, technical and management support.

As he began to evaluate various coal deposits, Tinkler would seek John Moore’s advice on technical questions about the equipment needed, the cost structure and so on. The men’s personal relationship was close; the three would go to Knights’ rugby league games, lunches and dinners together, often bringing their families.

Undoubtedly, Tinkler was learning fast. It has taken time for it to become clear just how tough these early years were for Tinkler as he tried to establish himself in the mining business.

At times, his young family was literally broke. In February 2003, Singleton Council took Nathan and Rebecca to court over $1044 in unpaid rates, and in April the Singleton Local Court issued a judgement against them, totalling $1571, including legal costs. The Tinklers couldn’t pay, and in May the council’s lawyers got writs against them, with the debt rising to $1741.

They had fallen behind on their mortgage, too, and on March 30, 2004, they were hit with a default notice. In June 2004 Perpetual Trustees got an order in the Supreme Court for the repossession of the Tinklers’ home. They weren’t kicked out, but in July that year the Singleton house was sold for $420,175. At the age of 28, and like his father before him, Tinkler had risked everything, and lost.

Tinkler didn’t let the foreclosure stop him. Even as he was losing his house, he was rearranging his business affairs. On May 19, 2004, he registered a string of private companies, including the one he would soon rename Custom Mining Ltd and sell for a fortune. From this time on, all Tinkler’s major assets would be kept out of the reach of creditors, held either in Rebecca’s name or in the name of one of the many private companies he established, often with Rebecca as the sole shareholder, on behalf of their family trust.

Four years later, when he first topped the Young Rich List, Tinkler admitted: “I’m not proud of what I’ve put my family through to get here.”

Before Tinkler got his foot on a coal deposit, as he told The Australian Financial Review’s Angus Grigg in a landmark 2010 interview, he travelled to India and China and decided that everybody back home — including half the coal industry — was missing the big picture. He came back bullish.

“The Chinese … said we want to buy the equivalent of every [tonne of] coal that is exported out of the eastern seaboard of Australia. I think that scale issue is something that Australia has still not come to terms with. Don’t worry about doubling production, you could increase it by ten-fold and not have much of an impact on world markets. Australia is being held to ransom by the BHPs and Rios of the world: it’s worth it for them to work harder for less, to keep the prices up.”

Tinkler’s mind was made up: coal was the right game to be in. He was hungry. 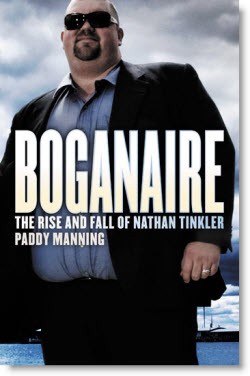 *This is an edited extract from Boganaire: The Rise and Fall of Nathan Tinkler, published by Black Inc and available in bookstores now (RRP $29.99). Get a copy of Boganaire with a Crikey subscription — renew your subscription or take out a new sub. Copies are almost gone, so get in quick.