A test of government will as Qantas and Holden come begging

The government began climbing out of the hole it had dug for itself on Gonski -- but its handling of Qantas and Holden meant more headaches. Will the Coalition succumb to populism and bail them out? 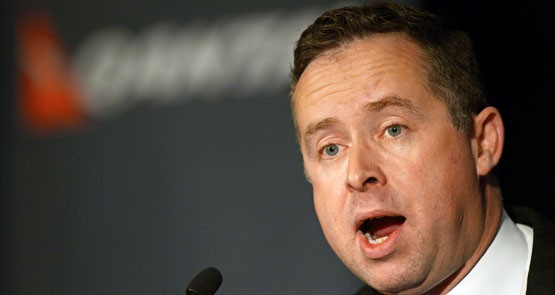 What should have been a successful week of recovery and repair for the government has instead been overwhelmed by two iconic names in the Australian economy: Qantas and Holden.

Both correctly claim they’re competing with government-subsidised competitors. Both say they need government help if they’re going to continue. Neither deserves a cent by any rational assessment of Australia’s economic priorities (the Productivity Commission is undertaking one such assessment right now). But both present a political pickle for the no-longer-so-new government, given voters’ irrational attachment to automotive manufacturing and their desire to see Qantas not merely survive but even return to government ownership — or at any rate not run by the clowns who have turned it into a multi-hundred-million-dollar loss-maker while trashing what was perhaps once Australia’s most potent corporate brand.

Yes, terms like “key tests” get bandied around by commentators too often, but these are both critical moments for the new government. It has already revealed a populist, economically irrational streak with the blocking of the GrainCorp sale. It has had to pull out a $1.2 billion fix for Education Minister Christopher Pyne’s spectacular ineptitude on Gonski education funding after less than a week of bad headlines. If it succumbs on either Qantas or Holden — or, heaven help us, both — the die will be cast: we’ll be back to the Fraser years (albeit without the progressive social and environmental policies).

Perhaps with that in mind, one of the economic dries within the government — a senior one, according to the ABC — decided to strike first and anonymously brief the national broadcaster that GM had already pulled the plug on Holden. Industry Minister Ian Macfarlane, automotive manufacturing’s friend at court and, probably, its only friend in government, insisted that the body bag not be zipped up before the patient had expired, saying the company had assured him no decision had yet been made. Macfarlane’s entitled to think such tactics are dirty pool from his dry colleagues, but after the Nationals managed to damage both the national interest and the government’s pro-business credentials with its successful tactics to block ADM on GrainCorp, at least the dries are mobilising more effectively this time to prevent further damage through the continuation of handouts to Detroit.

Qantas doesn’t appear to have too many friends at court, although it could probably drum some up if that extraordinarily successful CEO Alan Joyce launched another of his campaigns to blame unions for the company’s woes (chairman Leigh Clifford took time out from his busy schedule of overseeing the trashing of the company to address the far-Right HR Nicholls Society last night). But as with automotive manufacturing, Labor is gung-ho for government support of Qantas, even of partial renationalisation, and is poised to exploit any reluctance on the part of the government to give a handout or regulatory assistance to the “national carrier”.

And as luck would have it, both South Australia and Victoria go to the polls next year, although the latter isn’t until November. Finally returning to power after what seems like a generation in Adelaide should be a gimme for the Liberals, but cars will be crucial, and the Victorian Liberals will need all the help they can get to avoid being one-termers. There will be a short-term hit to consumer confidence if there were a high-profile casualty like Holden, even if the shutdown wouldn’t be for three years, coming as it would on top of Qantas’ public woes.

“… the right decision is the politically difficult decision, but this government needs to show it can do the latter.”

It’s nothing we couldn’t shrug off, especially as the economy may well have bottomed out at the start of this financial year, but it will mean further fiscal pain for the government. On that front, Treasurer Joe Hockey is now talking yet again about having to write down revenue further. All Labor’s fault, of course, he insists, but then Hockey insists on a lot of things. In January, he insisted he would deliver a surplus in his first year, which now looks about as likely as Alan Joyce delivering a profit.

Hockey at least had a win on the debt ceiling, with that pointless cap being removed through a deal between the “adult” government and the “economic fringe dwellers” in the Greens. As commentator Stephen Koukoulas pointed out, Hockey did ridiculously well out of the deal given much of what the Greens demanded is already available via the budget papers and the Australian Office of Financial Management. Moreover, Labor was unable to land any blows on the government in question time over its Gonski debacle, despite international comparative data showing how our educational performance continued to slide under the socio-economic status funding model that Pyne declared last week would be a good starting point for his own model.

That did, however, produce the chortlesome (yes, chortlesome) question time moment of Pyne haranguing Labor for simply throwing more money at education without targeting the areas that really make a difference. The Programme for International Student Assessment results show that won’t work, he insisted triumphantly, overlooking that his own multiple Gonski backflips had ended up with him throwing more money at the states without any targeting of any kind.

Meanwhile, Foreign Minister Julie Bishop had set off to first Jakarta and then Beijing to repair damaged relations, giving a necessarily cringing performance with Indonesian Foreign Minister Marty Natalegawa overnight. What exactly she says to the Chinese, given their confected fury at Bishop merely restating Australia’s long-held position over disputed territories, will be interesting.

Having started the week in a mess of its own making, the government did well to recover and move on, a key skill in office, and one the Howard government had in spades — although it’s always easier if you have supportive media outlets. But Qantas and Holden are going to undermine the government’s efforts to get itself back on track — or merely on track at all — before Christmas. In both cases, the right decision is the politically difficult decision, but this government needs to show it can do the latter.

Sadly but brutally both companies should be allowed to flounder and die. The Liberals have always been against nationalisation and subsidisation of industry and services and pro-privatisation so let the market decide.

However it is not as simple as this as BK states SA and Victoria are heading to the polls next year and much is at stake. Victoria under the Lib/Nat coalition are likely heading for defeat whereas SA it is very close and too close to call.

Both states have suffered and will continue to suffer from the ineptitude of Qantas and Holden mismanagement.

So what is the solution? Perhaps the following.

1. Government buyout of Holden and turned over to the university/innovative sector (CSIRO, etc) to develop and product electric/hybrid cars for the global market including not only cars but trucks, buses, etc. All Government vehicle purchases through this company.

2. Nationalise Qantas. Sell Jetstar. Retain and build international market and get rid of everything else. Close QantasLink or sell to REX or another company. Sack the entire board and CEO.

4. Upgrade the MEL – CAN – SYD – BNE rail corridor to accommodate high speed trains at 300 km/h which would compete with low cost and low service airline/bus alternative. Electrification would also be undertaken.

Tough decisions but can be done.

” Having started the week in a mess of its own making, the government did well to recover and move on, a key skill in office, and one the Howard government had in spades ..”

I have no idea what you’re talking about, but perhaps someone here could enlightened me. Are you suggesting all those ’emergencies’ and border protection issues are over and done with by the skillful staff of the Coalition?

Today’s Crikey is truly a work of art. McDonalds is the big bad wolf for wanting to open an outlet that will employ people from an area with some of the worst unemployment in the country. But it’s for our collective good that Holden and Qantas get thrown under the bus.

Meanwhile, the local populism of the Free Yarra Republic is to be lauded when allied against nasty McDonalds, but that same populism in support of keeping Graincorp locally owned is very very bad.

There’s nothing quite like the warped ideology of the Afternoon Herald of the Fitzroy Collective – now would you like fries with your hypocrisy or just a double shot skinny latte, before taking the slow train to Canberra for the local hero’s wedding on Saturday. But I guess BK can just ride his bike across town and feel righteous all the way with Christine and her new best fried the Abbott of Christmas Island.

Hand outs of cash or kind to the private sector cuts across leaving the market to do its work. If you believe in that stuff. There is a case to help when the market is providing a public service. Is it not time for a comprehensive transparent public examination of all taxpayer hand outs to the private sector. A clean out could well fix our so called deficit. Could even result in a cash dividend to ratepayers. Might also help reduce our CO2 emissions.

Stop subsidies to the private sector now including private schools. They are businesses with profit and loss margins nothing more nothing less. If they cannot survive on their own let them fail. That was the point I was trying to make albeit using existing ‘carcasses’ (Qantas and Holden) that have been propped up by the government to be nationalised and used for the ‘public good’ … something that the hard right / IPA / HR Nicholls / Murdoch stooges aka Bolt, etc do not understand or comprehend.