Defence lurk. Are some Defence types cashing in on the end of the mission in Afghanistan? This mole reckons so:

“The Australian Active Service Medal: certain senior Commissioned Officers of the Department of Defence have visited Afghanistan recently prior to the official date of termination of active war service in the prescribed area. These personnel who have not seen active service have made short visits into the prescribed war zone on RAAF aircraft making sure that their names are included on the in-and-out flight manifests in order to qualify for later Repatriation Benefits.”

If true, that could represent a significant use of taxpayers’ money for faux veterans (if you’re not up with army hardware, read about the Active Service Medal here — it’s for warlike theatres). We put the tip to Defence, who responded with this:

“Only personnel who are force assigned to conduct operational duties can qualify for the Australian Active Service Medal (AASM). Temporary deployments to the Middle East Area of Operations (MEAO) may take place for a range of reasons. However, only some temporary deployments qualify for the operational conditions of service, including any eligibility for medals and entitlements for that operation. All temporary deployments to the MEAO are heavily scrutinised and authorised at a high level within Headquarters Joint Operations Command. It is important to note that the conclusion of Australia’s mission in Uruzgan will not mark the end of the Australian commitment to Afghanistan. Australia, together with our International Security Assistance Force (ISAF) partners, will continue to support Afghanistan through a nationally-focused effort as we move towards transition across all of Afghanistan and the conclusion of the ISAF mission at the end of 2014.”

So Defence says no — they are “heavily scrutinising” any temporary deployments to Afghanistan. Still curious, Ms Tips whispered in the ears of some Defence types, who said this kind of lurk has happened before. But apparently there’s only a few people who could pull it off now, as you’d need good access and adequate training (force prep and pre-deployment). You’re not supposed to get the medal for just visiting a zone; you have to be specifically “force-assigned” to the area, and the ADF is pretty strict on this (although apparently couriers do qualify). And no, prime ministers who jet into a warzone in a flak jacket and unsightly helmet don’t get the medal.

Tips’ verdict? It’s possible this lurk is happening, but we need to see some evidence.

Sheehan on the case. Who’s Paul Sheehan investigating? This curious note appeared at the bottom of a column by Susan Ryan in today’s Sydney Morning Herald:

The firebrand writer told us today he’s “investigating someone and he was denying everything” so he couldn’t get his story firmed up in time. How intriguing …

7.30 host revealed. The highly competent Leigh Sales takes maternity leave from her gig hosting 7.30 from early next year, and Crikey readers have been interested in who should replace her. Sales took annual leave recently and was replaced by ABC everywoman Annabel Crabb; that prompted us to ask you who should take over from Sales next year. Plenty plumped for Crabb, but about 60% of you preferred someone else — Lateline’s Emma Alberici was popular.

The ABC has today revealed that Four Corners gun Sarah Ferguson will be the 7.30 host from February 10. Ferguson, who is famously tough and rigorous, has won three Walkleys and broken some big yarns. She got the Sales stamp of approval today:

Just one question for you. Not one reader nominated Ferguson as our Crikey 7.30 fantasy host — but she’s a cracking choice. You’ll have to do better next time.

You are receiving this email as someone who has registered your interest in receiving updates on the Teach Next programme.

We are writing to let you know that the next scheduled intake of the Teach Next programme will not proceed, and there will be no further intakes into the programme.  The Australian Government has decided to explore other options for supporting alternative pathways into teaching.

Thank you for your interest in this programme.

So in other words, get stuffed.

Climate change action. Yes. Yes, it really is this easy: 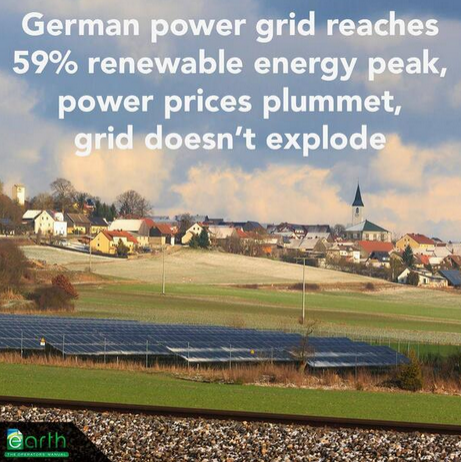 Germany has far more solar panels installed than Australia, and employs thousands of people to manufacture them (we only manufacture a small amount). Germany also has significantly fewer sunlight hours than Australia. Go figure.

Jet ski disaster. Ms Tips was just delighted to hear a caller to 3AW report that a jet skier reversed his car and trailer down a Victorian boat ramp but forgot to put his handbrake on, leading to the loss of his cargo in a creek. Now, when can we ban the damn things?

Jet skis and sniper training in the ADF sounds like a good combination.

But the coal company sponsors of “Climate Change Deniers R’ Us” can’t make a profit on solar?

Climate change action: Germany is fortunate to have masses of solar panels… and also fortunate not to have Tony Abbott.

‘That easy’, eh? Easy to be misled by cherry picked factoids that mean nothing for effective climate action. Germany’s CO2 emissions are on track to rise two years running.