The new drone war: Amazon and the online retail battle

Drones delivering books? A TV stunt on 60 Minutes is all part of a fierce retail war in the United States on "Cyber Monday". The future of retailing is very weird indeed.

As far as publicity stunts go, it was a good one. On Sunday night, as Americans concluded their Thanksgiving long weekend, 60 Minutes aired a story on the rise of online behemoth Amazon.

The timing was hardly coincidental, coming on the eve of Cyber Monday, the biggest web-based shopping day of the year in the United States. Digital retailers created Cyber Monday as an antidote to Black Friday (the US version of Boxing Day), to implore Americans to do their Christmas shopping on the web.

Having promised strong access in his profile of Amazon boss Jeff Bezos, 60 Minutes reporter Charlie Rose, himself hardly averse to the odd morsel of theatrics, delivered. As Bezos unveiled a set of Amazon-branded drones, the veteran reporter exclaimed: “Oh my god!”

The reaction across the country was instantaneous. The thought of the skies congested with computer-controlled devices transporting non-essential consumer goods to an indolent clientele unwilling (or too impatient) to wait for next-day delivery was uncomfortable for many. Others though admired Amazon’s sheer audacity. Within minutes, the topic was dominating US social media and for the next 24 hours, television news bulletins. The company’s plan had worked a treat. 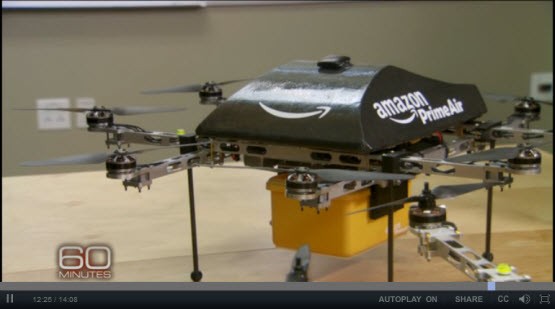 The madcap concept of drones was merely a diversion. The main goal — to remind the country Cyber Monday is here and Amazon is the place to buy anything online — was executed flawlessly. And it worked. According to IBM, Cyber Monday was the biggest e-commerce day in history. And Amazon reaped the benefits, landing sales on fashion, electronics, toys and its other smorgasbord of goods that were up 44% over last year.

The grave concerns booksellers once had about the rise of Amazon now seem quaint. While indie booksellers here are holding on for now, the fall of Borders and the seemingly terminal decline of Barnes and Noble, the last major book chain standing, is a portent to the future. Books have become almost a trinket in the increasingly ambitious Amazon universe. Visiting the website on Cyber Monday, it was difficult to even find reference to them on the front page.

The truth is, almost every retailer should be circumspect regarding Amazon. According to an excellent new biography by tech writer Brad Stone — The Everything Store — Bezos describes the company’s purpose as being “missionary” rather than “mercenary”. It’s fair to say that view is not universal.

Stone describes the range of products at Amazon as encompassing an inflatable unicorn horn for cats ($9.50) and a 1000-pound electronic-lock gun safe ($903.53). And another extreme: the company’s cloud computing clients (including the CIA) now bring in $2 billion. That business is growing 50% annually.

The concerns held by many consumer groups and American retailers — who are, it should be noted, the largest non-government employers in the country — are eerily similar to those of Australian retailers.

The equivalent issue of applying GST to overseas online purchases has been playing out here for several years. Physical competitors have long insisted Amazon and other online stores should be forced to collect sales tax on all transactions. Presently, they only collect sales tax (around 6-9% on top of the final price) in states in which they have a physical warehouse.

Crucially, in 30 states, including big markets Illinois and Florida, they don’t. That in itself could be deemed an unfair advantage in that their prices are usually already lower anyway (owing to Amazon’s buying power and paper-thin margins).

Yesterday, the US Supreme Court ruled online sites have to collect sales tax in every US state, even if they do not have offices there. It was a huge victory for Old Retail.

The win though is deflated somewhat by the sector’s own travails. Black Friday was a bust this year with the decision by many stores to open on the previously sacrosanct Thanksgiving Day, cannibalising sales. Consumers spent $1.7 billion less than they did last year. Sales were off 13.2%.

In contrast, on Cyber Monday, sales were up 20%. Web retailers were also buoyed by the news that shopping via smartphones now comprises 17% of all online purchases. Those retailers facing increasing labour and rental costs on top of reduced crowds in shopping centres were not. Sounds familiar, doesn’t it?

Some competitors are adjusting. Walmart had its biggest day ever online on Monday. Although, as Jon Stewart drily noted on The Daily Show, its website failed to handle the load.

While Walmart is dealing with its now customary battles with trade unions, its foreign corruption court cases and those who say it is anti-competitive and predatory, Amazon is finding that its success is fomenting a large list of its own angry critics.

While Americans almost universally admire the company, they are increasingly wary and suspicious of it. The Amazon drones, which the company has now described in more startling detail on its website, may be a tipping point. In Europe, the company’s warehouses have been compared to “slave camps”. An alarming BBC investigation last week detailed the dire conditions inside Amazon in the UK.

Amazon also now has its first official Australian outpost, which also provoked another round of navel gazing locally this week.

Meanwhile Google, another giant tech company that is intermittently scorned and respected, reminded Americans today that it is experimenting with its own package delivery system in several cities. The company opened up about its automated car project, in which it envisions robots and computers driving us to work and perhaps eventually delivering our groceries. Google watchers see automated delivery systems as a natural extension of the company’s robot car project.

There is plenty Americans plainly dislike about drones, though. Firstly, they made Rand Paul seem almost relevant. And this week’s episode of Homeland, airing directly after 60 Minutes, was heavily centered on the use of drones. Although fictional, it was not a flattering portrayal of the government mindset. Meanwhile, the American military said yesterday it is halting ground shipments of cargo leaving Afghanistan via a key route through Pakistan because it cannot ensure the safety of drivers. The reason? Intense protests in Pakistan over US drone strikes.

I think the neighbourhood kids will love the Amazon drones for target practice. After all gun ownership is mandatory over there…