Business leaders and conservative politicians are pointing to New Zealand as an example of good economic management. But former NZ government adviser Marcus Ganley says we need to look deeper. 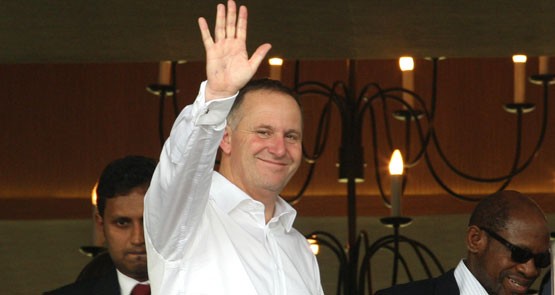 New Zealand politics seldom attracts much attention in Australia. The fact that the NZ Labour Party went through its first leadership election that included rank-and-file party members only weeks before the Bill Shorten v Anthony Albanese leadership challenge bypassed many who were quick to draw comparisons with the UK and Canada.

But among business commentators and Liberal Party politicians there is a tendency to praise the economic management of current the New Zealand government. In his reply to the 2013 budget, then-shadow treasurer Joe Hockey claimed New Zealand provided a model Australia should follow. New Zealand media reported that at the Australia New Zealand Leadership forum in 2012, Australian business leaders described New Zealand as being “blessed” with its government.

The latest example of this tendency to glorify the New Zealand government for good economic management was provided by Jennifer Hewitt in Wednesday’s Australian Financial Review under the headline “New Zealand’s National Party leads the way“. The problem with this analysis is that it conflates the fiscal and the economic.

It is true that the John Key-Bill English minority government has overseen a strong fiscal consolidation. But to place this in context, the Labour government they replaced in 2008 had delivered a surplus budget every year from 2000 to 2008 and had paid off government debt, resulting in the government accounts showing a net asset position from 2006 onwards. Despite Hewitt’s comment about growth under former NZ prime minister Helen Clark’s government, for the period 2000 to 2008 New Zealand recorded the longest economic expansion since the end of World War II.

Like most similar economies, the New Zealand budget position deteriorated dramatically during the GFC. This resulted in the 2008 Pre-Election Fiscal and Economic Update (PREFU, functionally equivalent to the Pre-election Economic and Fiscal Outlook) showing deficits across the forward estimates. Fortunately the prudence of the previous Labour government in paying off debt and building up assets ameliorated the impact of this.

The National Party government has overseen a fiscal consolidation, and a return to surplus is expected by next year. Along with spending reductions, this has been aided by a 20% increase in the rate of GST. However, an economy is not simply about budget management. When the wider economic performance of New Zealand is examined, the picture is less rosy. Two key variables show this: economic growth and unemployment.

At its essence government is about priorities. Strong fiscal management is important. It ensures government services are sustainable and avoids placing undue burden on future generations for the services provided today. However, fiscal management is not everything. Before heaping too much praise on New Zealand’s National Party, it is worth looking at the economy as a whole.

Don’t suppose it occurred to you to note that Mr Ganley was an adviser to a minister in the former NZ Labour Government, and as such has a political imperative in running down any achievements of the current government.

Some disclosure of where someone’s bias’s are coming from is always welcome Crikey, especially for a publication that spends a lot of time excoriating other media outlets for bias.

Marcus Ganley is spot on – to hold up the National Party Government in NZ as being a model to aspire to is folly in the extreme. Rather it is an example of crony capitalism, deals for mates and an ongoing abuse of privilege at the expense of the majority and the long term well being of the nation. Take the governments asset sales program as an example – touted as necessary to bring the budget deficit under control. Instead it has not even made up for the taxes lost by the tax cuts needlessly given to the top 10 per cent of income earners. Instead it has been likened to selling the house to pay the mortgage! Michael James would do well to declare his own bias and connections when serving up his particular brand of self interest. Or would being outed as a right wing nut job not suit your argument Michael?

Well Mr Tank,
You need have no doubt about my own bias. Nothing to hide here. But Michael James’ comment is spot on. Ganley was advisor to the guy running the economy under Labour and it’s no surprise that he praises the Helen Clarke administration.

What he doesn’t mention is that though government debt was reduced as a percentage of GDP in the Cullen years, tax went up from below 31% of GDP to above 34%. As government service fees are not generally included in these numbers, government as a proportion of the economy rose a great deal under Clarke, reversing the stellar performance of the previous Labour administration under Lange / Douglas.

To damn the current administration with this very partisan article is churlish and shallow. The Key government has quickly and dramatically reduced taxes to below 30% of GDP and the economy is now growing quite strongly.

I realise Mr Tank expresses the usual lefty view that the wealth creators, who pay almost all the tax collected by governments, are somehow less worthy than all those beneficiaries who produce nothing and who were the biggest receivers of state largess under Clarke. But the unfortunate fact remains that if you want to redistribute wealth from the rich to the poor, you do best by incentivising them to create the wealth in the first place – something that is happening in New Zealand.