Helen Razer tells you how to protest and dissent in the modern age -- without resorting to cheap anti-intellectualism and anti-privilege.

Popular thinker William F. Buckley once joked he would prefer to be governed by the first 200 names in the Boston phonebook than the Harvard faculty. A is for Anti-intellectualism; the colourful credo hung on the nursery walls of neo-liberalism. It is the view of formal reason as elite that gives us bunkum like Nick Cater’s The Lucky Culture with its “latte sippers”, “champagne socialists” and other beverage typecasting long since lost its pop. It is this view of “book learning” as the work of statist monsters that informs the Right.

Except, of course, that it really doesn’t and really hasn’t; not, at least, since influential neo-liberal economist F.A. Hayek urged in the middle of the 20th century for a “free society (that is) once more an intellectual adventure, a deed of courage”. Hayek and his rival John Maynard Keynes didn’t agree on much, as illustrated by the rap anthem below, but they both knew that the ideas of intellectuals shaped the future.

Buckley, of course, knew this as well; the Yale alum and professed intellectual used more $20 words than Guy Rundle. The Right’s “anti-intellectualism” is a tactic and a fiction retold convincingly by windbags like Cater and Bolt.

It is also a story, to our shame, now used quite sincerely by the Left.

In recent weeks, our nation’s better feminists have taken up the essential work of protest against state legislation that will potentially restrict access to abortion services. In response to the “foetal personhood” changes in New South Wales and in Victoria, the still murky propositions by Geoff Shaw, we have seen protest on social media … 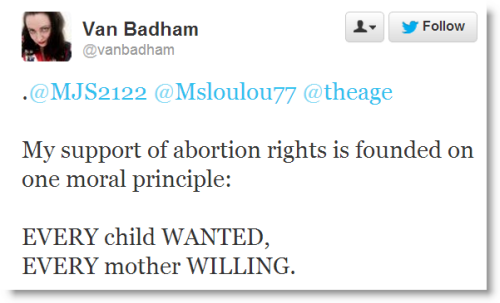 … urging the categorical imperative but on the streets, a stranger sort of protest that is not, in my view, much different from a Cater view of things.

On the Facebook fan-page for the group Destroy the Joint, we see a much “shared” and “liked” photograph of a man whose act of protest is consent. 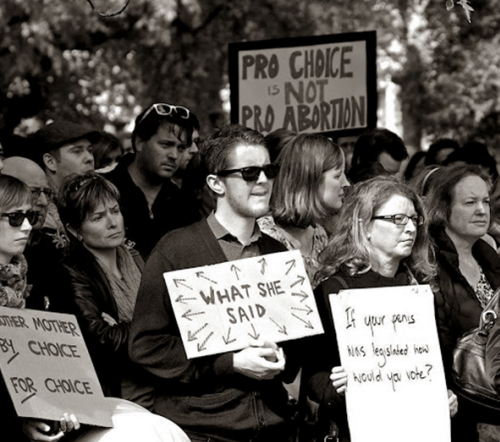 Now, in one reading, this is a heart-warming picture of a chap who offers unqualified support to the gender who will be most overwhelmingly impacted by changes to termination law. On the other, he represents the anti-intellectualism best expressed in the Left’s frequent caution to “check your privilege“.

Briefly, this charge, applied within Left-liberal circles, is one of universalism; of failing to acknowledge other perspectives than one’s own. The charge is laid, perhaps, most frequently in feminism where the idea of “intersectionality” has taken hold as a half-idea.

With few primary texts but a great many adherents, intersectionality is, in my view, the pseudo-intellectualisation of what, by the modern era, had become the Bleeding Obvious. To wit: (a) a single individual can belong to more than one subordinated social and economic class, and (b) any tit with any idea of social or critical theory should be aware of this.

John Rawls’ “veil of ignorance” is one of many intellectual solutions to the problem of people being ethnocentric or sexist or homophobic dicks. But the original position, or any intellectual riposte to questions such as abortion, are increasingly deemed invalid responses in late era Left-liberal protest.

Dependably Left Guardian columnist Zoe Williams offered her views on the “check your privilege” disorder to which progressives had been subjecting themselves. Uncomfortable with the idea that only those who found themselves at the most perilous intersectional crossroads could protest an injustice, she cheekily asked “are you too white, rich, able-bodied and straight to be a feminist?”.

The notion that only the most vulnerable can speak on the behalf of the most vulnerable is, as Williams points out, not only informed by a monumental logical flaw: the most vulnerable are often too busy being vulnerable to speak. It is also the case that protest that demands and feeds upon the silence of its “allies”, such as the taciturn chap in the picture above, does nothing for the sort of intellectual cross-pollination that has long fuelled radical reform movements.

The labour movement, for example, benefited as much from involvement with the late campaigner Chicka Dixon as the land rights movement did from its acquaintanceship with socialism. It is no small concern that this sort of intellectual co-management is a diminished possibility in the age of “check your privilege”.

I checked my privilege and found that it intersected with my struggles. They cancelled each other out, leaving me feeling quite ordinary. Damn you, Razer.

Great piece. It’s reminded me of Jeremy Paxman’s interview of Christopher Hitchens where he asked, and I’m paraphrasing, “Do you still consider yourself a leftist”? Hitchen’s reply was Yes, but both Paxman and Hitchens settled on a better description dialectic.

Well, I guess I’m not one of the latte-sipping intellectuals, cos I can’t work out what Helen Razor is actually saying here! Is she FOR the guy with the “what she said” poster, or against him ? If someone could summarise without the political-sociology jargon, for the benefit of us non-intellectuals, I would truly appreciate it.

Australian politics is very tribal and many times, I think this can be extended to particular struggles and causes. Much of it comes down to groupthink which, while the cause may be just, can intefere with logical and rational thinking on a subject; and promote the tendency for knee jerk responses.

Many times I have seen an author of an article bombarded by enthusiastic feminist responses, and which clearly demonstrate the person has not really read the article and/or misunderstood the message intended.

PS: Have never understood the beveragisation of political thought. Can anyone explain it?