Tony Shepherd, charged with finding ways for the Commonwealth to pay down debt, knows plenty about debt, and not so much about paying it down, Glenn Dyer and Bernard Keane write. 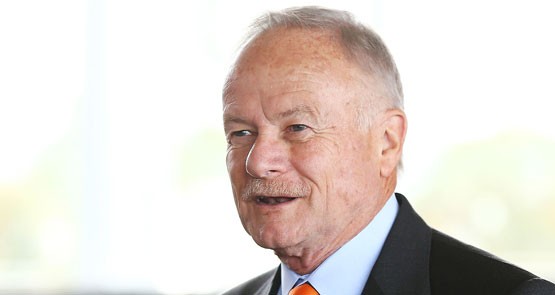 “It is … essential that the Commonwealth government live within its means and begin to pay down debt,” declare the terms of reference for the Commission of Audit announced by Treasurer Joe Hockey in October.

Fair enough, even if Hockey wants more debt at the moment, not less. But Hockey’s hand-picked commission chairman, Business Council head Tony Shepherd, is in a slightly difficult position on that score.

As we’ve pointed out in the past, Shepherd was appointed deputy chair of construction company Transfield in 2001 and was its chairman from 2005 until October. He’s presided over hundreds of millions of dollars of losses on poorly designed purchases in the United States and Australia, thousands of job cuts and, like many other companies, emergency cash raisings during the GFC.

There he was this morning on page one of The Australian Financial Review, jovially shaking the hand of Prime Minister Tony Abbott, and on the front page of The Australian’s business section, leading Abbott and others into the 30th anniversary dinner of the Business Council of Australia.

But buried on page 15 of the AFR was a devastating report. Transfield’s debt levels have soared 15% or more in the six months to June 30 this year to $566 million, a rise of $75 million. Nearly half that amount was due to be repaid to a syndicate of banks in December 2014.

Transfield, like many other service companies, has been badly hit by the downturn in the mining sector; companies like WorleyParsons (much bigger than Transfield), UGL and Leighton have all reported lower revenues and profits as a result of the downturn. The damage from the slowdown is spreading; small Perth contractor Forge Group was last week bailed out by ANZ, which decided risking more than $60 million was better than Forge going under. And Ausenco, another Perth contractor, is raising around $31 million to try and stave off a fate similar to that of Forge.

Transfield’s balance sheet was over-geared, according to analysts. It has sacked 20 senior staff in the past couple of weeks, including its head of investor relations, and there’s speculation consultants have been tapped to investigate options to manage the company’s debt.

Among the consultants is the advisory arm of KordaMentha, used by ANZ Bank on Forge to look at options for that company as it failed to convince investors to take shares to raise urgently needed cash. Transfield is nowhere near Forge’s position, but the fact that it is being openly speculated about in the media tells us the situation must be tough and the mess left behind by Shepherd is pretty substantial. As chairman of Transfield, Shepherd presided over the abandonment of dividend payments to shareholders to preserve cash.

In the latest year Transfield posted a net profit of $65.5 million before impairments and amortisation. But after write-offs and impairments, the year to June net loss was $254.4 million, a reversal from the net profit of $96.4 million a year ago, forcing the group to pass on payment of a final dividend. The Transfield board, led by Shepherd, agreed to what one analyst called an “ill-timed” $85 million buyback in late 2011, designed to lift the company’s appeal to investors, which lasted a year before being ended as the cash drain became too much, wasting money that could have been used to pay down debt.

“Pay down debt.” Indeed. The Business Council under Shepherd is constantly urging governments to “pay down debt”. Its budget submission earlier this year is riddled with demands that the government get on with “paying down debt”. Transfield investors might be wondering why Shepherd didn’t take his own advice — and how much use his counsel will be to the government.

“The damage from the slowdown is spreading; small Perth contractor Forge Group was last week bailed out by ANZ, which decided risking more than $60 million was better than Forge going under. And Ausenco, another Perth contractor, is raising around $31 million to try and stave off a fate similar to that of Forge.”

Jesus!.. Bernard and Glenn, how do you find this stuff out?

This rubbish about paying down debt is going to destroy the Australian economy, either the public sector or the private sector will have to go into debt so expansion can continue, and I think that it is infinitely preferable to have the sector that cannot default and has the capability to print as much money as is required take it on.

The Right agenda: shrink the public sector to nothing while diverting any comment on the huge handouts to business. Paid for by increases in taxing the poorest Australians while keeping the Rory’s for the rich intact: eg superannuation.