It's John van Tiggelen v Gerard Henderson in an e-stoush worth reading. Plus other media snippets of the day.

Van Tiggelen v Hendo (and The Oz). As Good Weekend editor Ben Naparstek discovered earlier this year, The Monthly editor John van Tiggelen sure knows how to fire off an acerbic email. This time he’s got conservative commentator Gerard Henderson and The Australian in his sights.

It all kicked off on Tuesday when Henderson took aim at JVT in his regular Sydney Morning Herald column. Hendo was incensed at the use of “frattish, undergraduate language” in the latest Monthly editorial (van Tiggelen called the Abbott government a “frat party of Young Liberals who refuse to grow up” and decried the party’s “onanistic reverence for John Howard”). He was also unimpressed by The Monthly‘s Cut & Paste spoof lampooning The Australian‘s foreign editor Greg Sheridan for his commentary on close mate Tony Abbott. In response, van Tiggelen fired off an email to Henderson, which led to a delightful e-stoush we’re more than happy to republish. After all, why should you have to wait until Friday’s Media Watch Dog?

Not content to duel with Henderson, van Tiggelen also launched a missive at the Oz‘s editor-in-chief, Chris Mitchell, after the Oz bagged him in yesterday’s editorial. “I love it when you get all worked up and righteous,” he wrote. “In fact, I confess to feeling a bit like Christopher Pyne in the Leak cartoon on the same page, being flailed by his PM-cum-headmaster, only to smile and say, ‘More Please’.” No response as of yet, but we’ll keep you posted. — Matthew Knott

Australian hacks depart. It’s not just Fairfax losing some of its top journalists: two of The Australian’s most senior reporters left the paper last week. Melbourne reporter Adam Shand has left The Oz and will return to Zimbabwe, where he previously worked as a freelancer. Shand, previously at Channel Nine and The Bulletin before joining The Oz in February 2012, specialised in crime and corruption stories. Senior business journalist Susannah Moran, nominated for a Walkley in 2010, has also departed the paper in what insiders say will be a big loss. — Matthew Knott

Newsweek is back in print. And there is life after Tina Brown for Newsweek — a year after the print edition of the news magazine was canned, it’s returning to life as an analog entity. Newsweek‘s new owners, IBT Media (which publishes the digital-only International Business Times), announced via an interview in The New York Times that the magazine would return in print form early in 2014 with a print run of around 100,000 a week. The magazine’s editor-in-chief, Jim Impoco, told the NYT the magazine would be a boutique publication, closer to The Economist than Time magazine. It will be a 64-page, subscription-based weekly. The first edition could appear in January, according to the interview. The decision to resume publishing the magazine comes the same week as New York magazine announced it was moving from a weekly schedule to twice a month to save money and reduce costs. — Glenn Dyer

Palmer steaks his claim. Thanks to Crikey reader Grahame Bowland who captured this before it was corrected. We don’t think it was a fat joke … 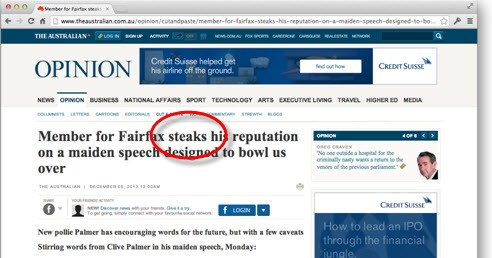 Queensland’s No. 1 news? Just who is the who’s who of news in Brisbane? They can’t both be number one, can they? (Video via Australian TV Fan.) 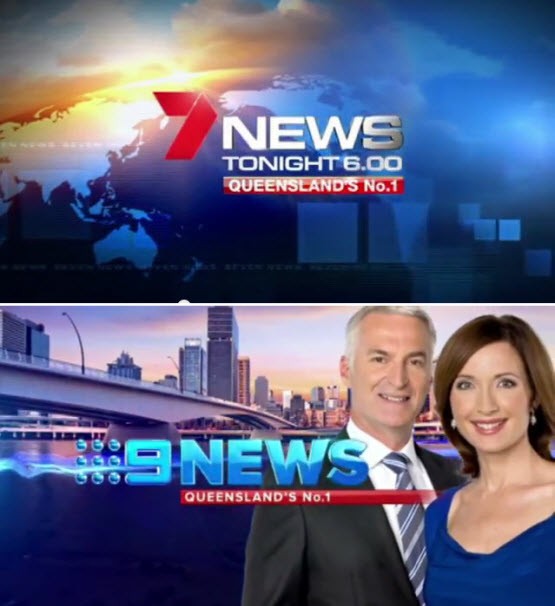 Video of the day. “It’s been a privilege,” said Ten’s Melbourne newsreader Mal Walden, signing off after 52 years in broadcasting last night …

It appears that Mark Latham now has a major rival for Hendo’s non-affection.

The most effective treatment of the media’s contrarian table thumpers e.g. (Bolt, the Hendi, Devine, Albrechtsen etc etc) is not to read their work or talk about it…to anyone.

My stock response to the regular shrieks of horror at their output, is to ask “who is that”?

If you don’t object to them, they’ll be fired..eventually