How did the trashy, uber-tabloid Mail Online become the most-read newspaper website in the world? We take a look at the top 10 reasons for its phenomenal success on the eve of an Australian launch.

Australian web users may not be overly familiar with Mail Online, but they’re about to be. The UK Daily Mail‘s internet offshoot, already the most popular newspaper website in the world, is launching in Australia next year. Crikey takes a look at the top 10 reasons for the site’s success …

1. Separate but equal. The Daily Mail was initially dismissive of the web, with editor Paul Dacre famously proclaiming in 1999:  “A lot of people say that the Internet is the future for newspapers. Well, I say to that: bullshit.com.” Until 2007, the paper’s website, dailymail.co.uk, was essentially a limited rehash of that day’s paper.  The site was slow to load, lacked flexibility and trailed behind The Guardian and The Telegraph in online readership. But the paper had a rethink and commissioned a top digital creative agency to review its web offering. A key decision was separating the Mail‘s web and print operations: a stand-alone editorial team was hired, and the site was rebranded as Mail Online. The site was allowed to develop its own unique personality and focus more on celebrity than the right-wing politics the paper is famous for. According to the New Yorker, only 25% of the site’s stories originated in the paper. The lack of integration has allowed the site to cultivate a younger, more affluent, more female-skewed audience.

2. Celebrity sells. It doesn’t matter how trivial it is: if a celebrity is doing something, anything, the Mail will run it. Most of these stories appear on the site’s famously addictive “sidebar of shame”, which editor Martin Clarke prefers to call the the “right rail of genius”. Here are some selections from today: 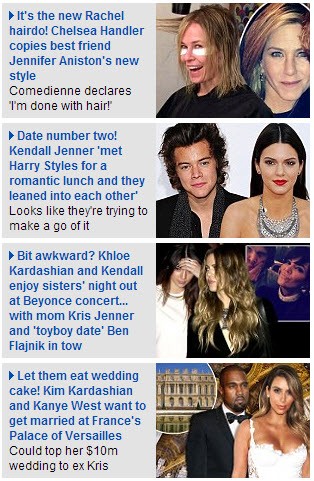 Although obsessed by celebrities, the Mail is far from reverential about them. The site loves to cover flashes of cellulite, “nip slips” and other embarrassing mishaps.

3. Make it weird. But don’t think the Mail doesn’t cover regular punters, too. The site loves human interest stories that are tragic and/or wacky. If sex is involved, even better. Here are some examples from today:

Other Mail favourites include animal stories — “The animals that do best are monkeys, dogs, and cats, in roughly that order,” Clarke told Esquire — and stories about things that may give you cancer (chips, deodorant, broccoli, eggs, sex with animals and much more).

4. Outrage pays. The Mail isn’t overly interested in whether readers agree with a story or think it good journalism — what matters is they click on it and share. In April 2012, Samantha Brick became the talk of the internet when the Mail published an article by her titled “Why Do Women Hate Me For Being So Beautiful“. That story — lampooned around the world — drove 1.5 million viewers to the site and received 224 comments every hour. The site has a long history of publishing outrageous — many say sexist — stories about women, who make up 53% of the site’s readership.

5. Ugly is beautiful. Mail Online has broken almost all the rules of online publishing. While other sites have focused on crisp, clean designs — with a clear distinction between “above the fold” and lesser stories — the Mail‘s homepage is a frenetic jumble of stories and pictures that runs into eternity. Were you to print it out, the homepage would run to five metres. The lesson is that, contrary to conventional wisdom, web users are happy to scroll and scroll until they find something they like.

6. Make them click. While sites such as the BBC allow stories to speak for themselves, Mail Online stories scream — almost demand — to be read. The key component here is the site’s unusually long headlines, which can run up to 40 words and are packed with detail. Here are some examples from today: 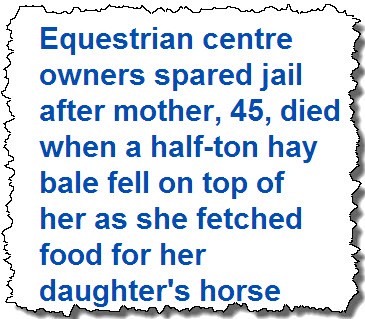 7. Make them stay. One of the Mail‘s guiding philosophies is “no dead ends”. Users who click on one page are encouraged to click on another and another and another. Article pages are packed with links to other Mail stories, and the addictive “sidebar of shame” appears on the right-hand side of all stories. The homepage is also being updated regularly to lure viewers back. It’s not uncommon for Mail readers to click on 40 stories a day.

9. If you can’t beat ’em … The Mail is shameless about repackaging stories from other publications in order to steal their clicks. Sometimes this extends to blatant plagiarism — like in November, when the Mail ran an exclusive Daily Mirror interview with actress Emma Thompson verbatim on its site. There are other infamous examples. The Mail is also notorious for not linking out to other sites when rehashing their stories.

10. The power of search. The Mail‘s online team are masters at search engine optimisation. The site’s long headlines — containing popular search terms — and huge volume of homepage stories help boost the site’s Google rankings. The Mail‘s editors are constantly tracking what users are searching for on Google and tinker with their stories and headlines as a result. “Target things that are low competition but searched for frequently,” the site’s head of search and social media advised earlier this year. “Try to match the exact phrase that people are searching for.”

Which news websites you’re clicking on — or not

It’s hard to imagine the habitual Mail reader has an adequate attention span to complete reading a 40-word headline.

Given the superficiality to which this country has fallen the Daily Mail will do well.

That’s how it attracts readers/visitors.

But how does it make money?

Dumb and getting dumber.

Oh gosh, I feel sorry for you having to even look at their website. It would make me bleed from my ears. I too think they will do well in this country *sigh*