Indians come from across the seas to join local corruption fight

India's Aam Aadmi Party is vowing to fight the country's systemic corruption. Indians living in Australia have made the journey to help give them the chance, writes freelance journalist Alys Francis. 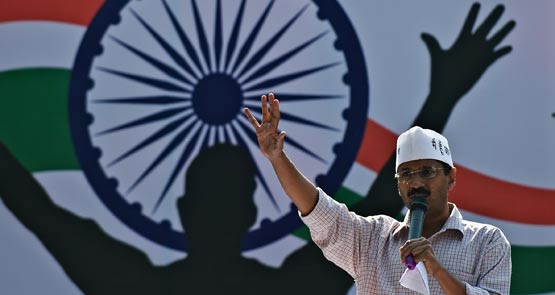 This week, Brad Mishra took a break from his job as a corporate executive in Sydney this week and flew to Delhi in India. He’s volunteering for the Aam Aadmi Party — a party formed last year by activists from Anna Hazare’s high-profile anti-corruption protest.

“I thought it was quite important to come,” said the 45-year-old, speaking from a party office in Delhi. “It’s a huge opportunity for India to change and get rid of the corruption that has been so widespread.”

The litmus test for the Aam Aadmi Party — or Common Man Party — comes today as Delhi voters go to the polls in the state election. Founded by Anna Hazare’s top aide, Arvind Kejriwal (pictured above) last November, Aam Aadmi Party’s promise to sweep away the endemic corruption that plagues India has struck a chord with non-resident Indians around the world — including a dedicated group from Australia.

Hazare’s anti-corruption hunger strike sparked protests across India in 2011, but the activist remains opposed to politics, controversially choosing not to take part in the party.

A resident of Australia for 20 years, Mishra started a local support group for Aam Aadmi Party, the Aam Aadmi Party of Australian Indians, soon after the parent party was founded. He told Crikey the group had more than 1000 members across Australia, seven of whom have flown to Delhi to help with the election. Back home, a team of volunteers has been making 700 calls to Delhi each day in an effort to win residents over, while also drumming up support on social media.

The Australian contingent also raised the 1.4 million rupees (A$24,600) Arvind Kejriwal needed to campaign in his consistency. “We sponsored Arvind Kejriwal’s constituency,” said Mishra, who intends to stay in India supporting the party until April.

Sitting in the party’s headquarters in Delhi’s Connaught Place amid a bustling crowd of volunteers and local media, party spokesman Pankaj Gupta said a third of the party’s total 200 million rupees (A$3.5 million) funding had come from non-resident Indians. “That has been a very good source of funding,” he said.

Running as the underdog against India’s two major political parties, Indian National Congress and Bharatiya Janata Party, Gupta says the level of volunteer support for Aam Aadmi Party is unprecedented in Indian politics. The party’s global support co-ordinator Shalini Gupta estimates that 150 to 200 Indians from the United States, Germany, Belgium and Britain had travelled to Delhi to volunteer for Aam Aadmi Party.

“A lot of people have actually left their jobs — left their jobs, closed their businesses and just transferred themselves to Delhi to work in this movement,” he said. “We have more than 10,000 volunteers working for us every day. When you accumulate all those man days it becomes a huge chunk of effort — that is what has really developed this party.” 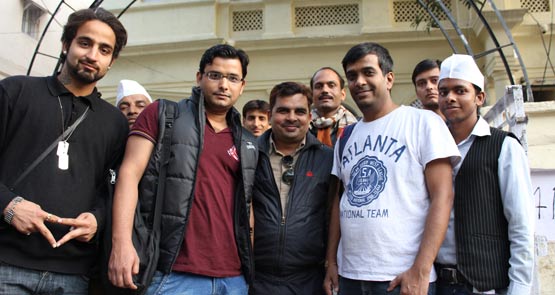 One Indian who quit his job at a Melbourne IT company and flew to Delhi to support the campaign is 25-year-old Aman Sharma (pictured, second from the left, with fellow supporters). “I was on holiday leave but they didn’t extend it, so I left my job,” said Sharma, who flew to India seven months ago, leaving his brother in Australia.

Sharma said the party had given people hope that India’s endemic corruption could be weeded out: “Why do we go outside of India, because our political system didn’t give us a good opportunity to establish ourselves here. [Non-resident Indians] are already connected here because of family, and now they feel it’s time to change the political system through this party.”

From big business to the everyday fruit seller on the street and everywhere in between, corruption is a major issue in India — billions of dollars in “black money” is rumoured to be hidden in Swiss bank accounts. Aam Aadmi Party has told voters its first order of business will be to pass a controversial anti-corruption bill currently pending before parliament and take steps to bring the money back.

It’s not the first time a political party has won over Indians by promising to end corruption. In the 1970s the Telugu Desam Party swept to power in the state of Andhra Pradesh but was kicked out after just one term, having failed in its core mission. Asked how Aam Aadmi Party plans to tackle corruption, Gupta admits the party has no plan.

“We haven’t thought of it yet; we have concentrated ourselves on the Delhi elections,” he said. “Only after the Delhi elections are completed will we start thinking about that because the results of the election will give us a lot of direction.”

The election — results will be known on Sunday — is being closely watched as an indicator for how things might go in India’s national election next year, although Aam Aadmi Party has not thrown its hat in the ring to run as yet. Having ruled the state for the last 15 years, Congress has been seen by many as the favourite to win, but the Aam Aadmi Party has rattled the political establishment.

This comment may be wide of the mark, but here goes.
The Sultan in Istanbul ran his local governments according to the principle of Baksheesh, where local officials did not receive a salary, but were expected to extract payments for their services directly from whatever profit stream might exist in the enterprises taking place in their regions.
This “system” may have spread to India and to Indonesia, where Western sensibilties regard the demand for a cut of the action for “official” local government oversight, as a form of corruption.
So is this the way in either of those nation’s plagued by “corruption”?
An incorruptible civil service has to be one which is well paid enough not to need to take a “cut of the action” in order to avoid starvation.
Beyond all the moral outrage are government officials in the affected nations paid enough by the government?
If not, demanding direct payment for their services is a kind of “user pays” ploy on the part of public officials is it not?
The corruption can only come when there are no alternatives to the public service provided, and the providers set their own “payments” above and beyond what is fair and reasonable.
This open ended, and essentially uncontrolled local “user pays” system seems to be creeping into conservative economic thought here in Australia, just as others are seeking to eliminate it in their home countries.
In Australia it is in the local government arena that the Sultanate’s Baksheesh or “user pays” is entrenching itself, so no lessons to be applied elsewhere among our neighbours.
Remember that the Inaugural Independent Commissioner Against Corruption in NSW, Ian Temby QC, declared that “the climate most conducive to corruption occurred at the local government level”, and that his criteria for corruption were incompetence and misconduct.
Civil servants not being adequately remunerated by the local government authorities, does not necessarily render those servants of the public corrupt, but a “living wage” might help them to survive.