Deconstruction woes for one. Which mid-sized construction company is “about to go to the wall,” according to a mole? There are whispers of “many, many unfinished projects”. There’s been not a mention of financial troubles at this company in the business media, and its website shows plenty of projects underway. One to watch out for, perhaps …

Telstra spinner departure. Following up an anonymous tip, we can confirm that, yes, long-serving Telstra spinner Craig Middleton is leaving the building. He’s been with the telco for almost 10 years; his current job is head of corporate affairs for the Telstra Media Group. You might have seen him tweeting away via this handle: 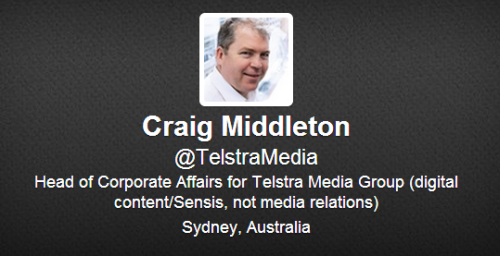 Our tipster reckoned: “Telstra’s extensive media and comms team continues to see major changes with management shifts and a shake-down of some of the old guard who’ve already left the building, several well-respected long-term spinners have jumped ship, sadly a lot of corporate history and goodwill is exiting Telstra.” We asked Middleton if he was leaving due to changes by management, but he said no — he’s just taking a break after a long period of service.

TV switch-off departmental casualties. A long letter we reckon is worth publishing. An insider from the Department of Communications reports that staff could be switched off along with analog TV signals before Christmas:

“While Australia is celebrating the end of analog television, tribute must be paid to the hundreds of staff in the Digital Switchover Taskforce of the Department of Communications, many of whom have worked tirelessly to progressively switch off the digital signal around the country since the first switchover in Mildura/Sunraysia in 2010. Particular consideration must be given to those few remaining permanent staff who chose to stay for the long haul because they wanted to see the project through to completion. These staff were rewarded for their commitment, hard work and dedication to the project with the sudden unexpected news, delivered in an all-staff branch meeting last week, exactly one week out from the milestone switchover in the largest Australian metro, that they have been deemed excess to requirements and face the likelihood of being out on their proverbial arses from January unless something else pops up. In this climate, if you’re not based in Canberra, not very likely!

“These staff chose to remain in the taskforce despite the often badly thought-through and numerous restructures over the last three years, often imposed without consultation. They remained despite the voluntary redundancies handed out earlier in the year and the offer of assistance (read: a word in the right ear) to secure positions in the same or other departments. They chose to remain despite poor resourcing, poor direction, excessive workloads and ridiculous, unfocussed, unclear and sometimes screamed demands from above. Ah, the joys of the taskforce!

“Consideration must also be given to those non-ongoing staff (mostly based in Sydney) who stuck it out, again because they were committed and wanted to see the project through to completion. They have worked hard in a climate of uncertainty, made even more uncertain by seeing hard-working respected colleagues, told they could be assured they would be needed right to the end, turfed out with barely any notice or justification. They continued to work hard in the hope that guarantees they had been informally given about work continuing and contracts being extended would be met.

“These staff were told a few weeks prior that there was absolutely no way they would be extended. Many of them will be out of a job on December 31. And yet they are expected to be flexible, continue working hard and take anything and everything thrown at them. Many of these staff have been training and holding up largely inexperienced temporary staff recruited through agencies which are making a motza out of senior public servants feverishly massaging budgets so they can manipulate the real numbers of staff levels by bringing in temps and paying them out of program budgets so they don’t show up in the salaries budgets for bodies on the ground.

“It’s an appalling send-off for long-term staff, both permanent and not, who have given their all in the most dysfunctional and surreal of work environments that has characterised the taskforce. It’s an appalling introduction to public service work for those first-timers who joined because they thought they could do meaningful work that would contribute in some way to Australian society. And it’s certainly a deterrent to continue working in the public service for many of those who have not been long in the service.”

We asked the Department of Communications to respond. You can read the full statement from secretary Drew Clarke for yourself, but essentially he insists the department has done everything it can to make the transition smooth. Some staff will have to go, through voluntary redundancy or potentially redeployment; non-ongoing staff knew that in September last year. Impacted staff have been offered career coaching and other assistance. He told Crikey:

“Effectively delivering the final stages of the Digital Switchover Program, while carefully balancing the need to reduce staffing, has been an ongoing focus for me and my senior management team during 2013 and has been an ongoing challenge for Taskforce staff.”

As for the claims of poor culture:

“The opinions provided about working in the Taskforce are naturally disappointing. Projects of the size and scale of digital switchover must be managed dynamically, with structures and programs adjusted over time. At all times, the Department has kept staff informed, and consulted as required.”

No happy holidays for teachers. It’s getting to that time of year when some of our finest teachers and tutors find themselves out of a job for the summer, as their institutions seek to save a buck. Just one little question: how are teachers supposed to pay the rent over summer? This from a northern type:

“Without prior notification, the Northern Territory Department of Education has begun terminating contracted teaching staff. Contracted ‘term of engagement’ is ignored. Affected individuals are reputed to be excellent teachers. Talk in the Alice Springs region (i.e. outlying communities) is parent groups were not informed/consulted and are not happy! So much for Gonski monies and states being treated as adults.”

We’ve put that tip to the NT education department and will keep you posted.

Marriages all round. Greens MP Adam Bandt has waited for same-sex marriage to become legal to marry his partner — who is female. You can check out a pic of the happy couple here.

The ACT has of course legalised same-sex marriage, and the first ceremonies will take place on Saturday (the feds are challenging those laws in the High Court, but there’s nothing to stop the ceremonies going ahead for now). Crikey sends its very best wishes to Bandt and his partner, and to everyone else — gay or straight — who ties the knot this weekend.

The whole Northern Territory Education Department handling of teachers is appalling. So many cuts means hard working, experienced contract teachers are left without jobs because permanent teachers have lost their positions and need to be placed. My husband is one of them. We have found out just before Christmas that he has no job next year after being contracted for 18 months. We packed up our lives in another state to come to the NT and are now left with no job and no idea where we will be next year. No help from the department, just thanks for your service but your services are no longer needed.