Thailand on the brink of military intervention — again

Why is there so much civil unrest in Thailand? And what makes this protest different? Crikey's international affairs experts explains the background and forecasts more bloodshed. 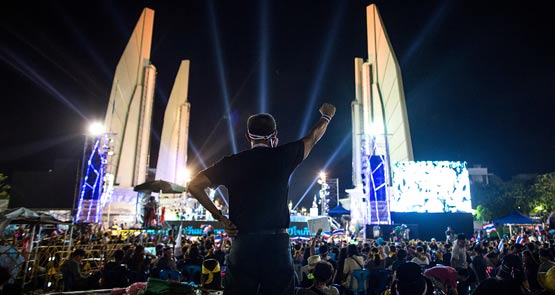 For a country that has so much in its favour, Thailand seems to be locked in a historical cycle of elected governments and military coups. The current political turmoil wracking the country’s capital, Bangkok, looks to be bringing it back to the brink of military intervention.

The political divides in Thailand that have led to the current crisis are not as simple as corrupt elected leaders versus trusted technocrats. Thailand’s politics is multi-layered, geographically divided and reflects a series of differing agendas and ideologies.

As with Thailand’s last political crisis, this one can be broadly understood along “red shirt/yellow shirt” lines. The “red shirts” hold elected government; the “yellow shirts” want them out. But, more accurately, this current contest is now more clearly between elected government and an anti-democracy movement.

The governing Pheu Thai Party (PTP) is headed by Yingluck Shinawatra, sister of ousted prime minister Thaksin Sinawatra, who founded the PTP’s predecessor, Thai Rak Thai. Thaksin and Yingluck hail from the north of Thailand but also draw their support base from the north-east and, broadly, among working-class Thais in and around Bangkok. They have had a generally consistent numerical advantage over the opposition, the support base for which is largely urban and middle-class.

Opposing it is the Democrat Party, with demonstrations organised and led by recently resigned Democrat parliamentarian Suthep Thaugsuban. As deputy prime minister in 2010, Suthep ordered attacks against pro-democracy protesters, leaving 90 dead and 2000 injured. Suthep has announced the formation of the unelected “People’s Committee for Thailand’s Absolute Democracy under the Constitutional Monarchy”, of which he would be secretary-general.

The military, always the key arbiter in Thai politics, is divided, but with its officer corps largely sympathetic to the opposition and/or the royalty. Thailand’s final political authority rests with the king, Bhumibol Adulyadej, who in the past has acted as a political circuit breaker.

However, the widely respected and much loved 86-year-old (on Thursday) king has been in physical decline in recent years and is regarded as no longer active. His successor, Prince Vajiralongkorn, is (in a country where criticising the royalty remains illegal) somewhat less popular than his father.

Thailand’s powerful business community tends to oppose the ruling PTP. But it, too, is divided. The more powerful lines of influence are not based simply on class, but divides among Thailand’s oligarchy, which shares a patronising top-down approach to all politics. This then reflects competing ethnicities (various language groups of Chinese-descendant Thais are dominant), patron-client networks and a traditional urban-rural divide that casts rural Thais in derogatory terms.

The PTP is widely seen as corrupt, buying votes and then engaging in corruption to cover costs. But the proposition that a “people’s council” of technocrats can be trusted is nonsense; apart from any other tendency they will, by definition, be unaccountable. Corruption is, thus, a given.

Where the king was happy to have a hands-off approach to Thai politics, other than in times of crisis, the prince is said to be more actively interested. One view has it that the current protests intend to restore the royalty to direct rule, with the backing of the army, or most of it.

Their agenda is to remove the PTP from power and to install, at a minimum, administrators appointed by the king. But with the king largely incapacitated, this decision would then fall to his son. The prince would thus become the less-than-benign arbiter of state affairs.

Over the past century, Thailand has experienced a military coup or an attempted coup, on average, at least once every five years. It is instructive, at this time of crisis, to note that the last military coup was seven years ago.

Thanks for this piece of clarity Damien.
The nightly 90 second grabs on TV and/or radio, don’t even go close to explaining the maze of Thai politics.
Plus the journalists who do understand the nuances and work in Thailand, are always somewhat constrained by the Lèse majesté laws.

I really don’t like to imagine what’s going to happen when King Bhumibol eventually dies.
When it comes to genuine respect and devotion from the populace, the crown prince is not in the same league as his father.