The Australian wants everyone to know it pays its senior staff well and they do a great job, OK? Plus other media tidbits of the day.

Adelaide TV news wars hot up. Nine News’ foray into the Adelaide news market has so far failed to make inroads into Seven’s ratings domination. Nine News director Tony Agars remains bullish, however, predicting positive results within a year following the hiring of about 20 new staff across news and TV production positions. “We make no secret of the fact that we want to be the best news service in Adelaide,” Agars told InDaily. “We want to be Adelaide’s preferred TV news service.”

Nine Entertainment Company acquired NWS9 from Win Television on July 1, triggering an old-fashioned TV news war with Seven in Adelaide. While it is still early days, OzTAM ratings since then have shown no change in Nine’s position as a distant second to Seven. In fact, Seven’s lead over Nine has increased since July 1, from approximately 33,000 in the first half of the year (average Monday to Friday audiences) to approximately 47,000. Since the acquisition, and against the trend in news organisations worldwide, Nine has ploughed “millions of dollars” into new staff and equipment, including reporters, producers, editors, camera operators and additional facilities, Agars said. “We now have access to an incredible range of facilities and resources that put us in very exciting times,” he said. Over at Seven News, the atmosphere is calm and resolute. News director Terry Plane admitted he “knew they [Nine] were coming for us”. “We have evolved year-on-year and will do a few more things. But it won’t include significant additional costs,” Plane said. “We’ll remain a stable, disciplined newsroom working to a good standard.  We have the most respected presenters and produce very good content to put around them.” — Jeremy Roberts of InDaily

Message from Katherine/Katharine. If you’re going to criticise someone it’s common courtesy to get their name right. Guardian Australia editor Katharine Viner tweeted this yesterday:

All about the optics. The Herald Sun and The Australian take co-operation to a new level in their reports on the Essendon scandal today. 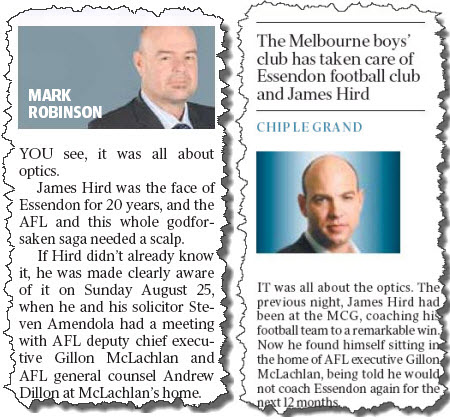 Video of the day. A group calling itself “Mipsterz”, or Muslim hipsters, has released this video called “Somewhere in America”, showing young Muslim women skateboarding, hiking, riding bikes, doing cartwheels, fencing and participating in a range of active pursuits over a Jay-Z soundtrack. It’s garnered some controversy; some think it’s stereotype-busting, while others say it’s bowing to a Westernised concept of identity …

How to deal with drug cheats at the Olympics

Did Essendon players get a fair shake?

Was Essendon caught up in an AFL sports medicine arms race?