Perceived backdowns on Gonski and GrainCorp kept cabinet ministers high on the list of names mentioned.

Almost all the names in the list this week can be directly attributed to either the Treasurer’s decision to block the sale of GrainCorp or the education funding kerfuffle (yes Clive, we have no idea why you are still getting coverage either). The pressure on both Education Minister Christopher Pyne and PM Tony Abbott over the changes to education funding announced last week was intense, with the government being forced to announce its first definitive back-down, and Christopher Pyne’s credibility taking a serious hit.

Regional and rural radio gave it a ton of coverage, while many in the metro media were calling Joe Hockey’s decision to block the sale of GrainCorp to the American firm ADM a back-down as well, this time to the National Party. Deputy PM Warren Truss and Agriculture Minister Barnaby Joyce voiced their strident opposition to the sale both internally and externally. Hockey himself publicly criticised the lobbying efforts of ADM, but the criticism from the business media following the decision was just about as virulent as the National’s campaign to stop it.

The only other issue of note getting anyone into the list was the public debate over the ABC’s decision to air Edward Snowden-sourced allegations of spying against Indonesia, with the Communications Minister Malcolm Turnbull publicly criticising the decision. Some media outlets agreed, although most defended the ABC’s editorial right to run the story, including one or two from the political right, such as the Australian version of the Spectator. 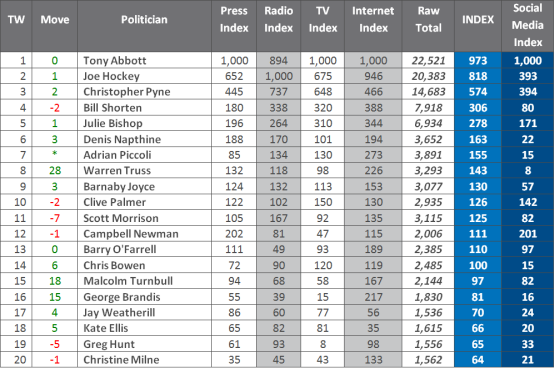 The GrainCorp matter pushed Joe Hockey right up the talkback list this week, with plenty of fans of the decision to block the sale.

Meanwhile social media continued to go nuts over the changes to education funding, with that issue gaining far more traction than GrainCorp.

Be still my beating heart. Interestingly, not much radio coverage overall, but visiting pop star Justin Bieber still scored higher on the talkback index than the social media index this time round. Time to head to Vegas already?