As a graphic designer I was turned on by Martin Sharp, long after he had tuned in and dropped out of London and returned to Sydney. His art was still mind-blowing years later. “I’d love to turn you on,” offered the Beatles in 1967, the year Martin Sharp produced the amazing cover art for Cream’s Disraeli […]

As a graphic designer I was turned on by Martin Sharp, long after he had tuned in and dropped out of London and returned to Sydney. His art was still mind-blowing years later.

“I’d love to turn you on,” offered the Beatles in 1967, the year Martin Sharp produced the amazing cover art for Cream’s Disraeli Gears. If psychedelia derived from the Greek for “mind-manifesting” you can only marvel at what was turning Sharp on. 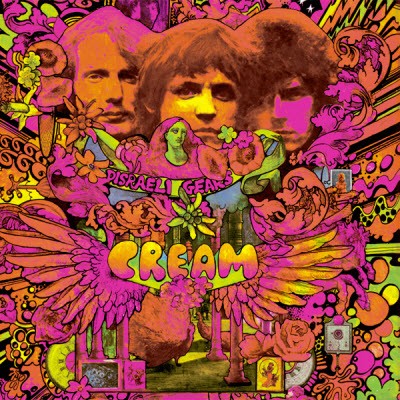 It was the same year he made the Dylan poster Mister Tambourine Man (perhaps even more famous than the great Dylan graphic by Milton Glaser, another design On switch; Glaser and Sharp may be responsible for my tolerance for His Bobness). I puzzled over the interrupted, handwritten poster type as Mist Urine, Tan Man or Mist Tan, Urine Man, which might blow anyone’s mind. The Dylan poster had great graphic power — produced by the tension between the pent-up corkscrew energy of myriad circles punning as the trademark antic hairdo, and the spurting lines emanating from his lips and chin, which was really a rising sun above a smaller Dylan below. It spins and shouts but the tight palette and Dylan’s frown holds it all in.

His work in the 1960s, Pop and Oz, redefined the aesthetic meaning of Wild and refined the quality of psychedelia; not least his brand of naughtiness was fun, not nasty. He could give shapes and colours the same kind of intensity as the sound of ’60s rock — a movement both popular and deep in feeling; not cerebral but extraordinarily vivid. More parochially he was a home-grown world champion, always groovier than Life magazine pin-up Peter Max. Plus, improbably and untrumpably, he wrote a song with Eric Clapton.

Sharp’s style changed but he remained pure pop. In the ’60s he was, in a literal sense, a pop artist, an artist among pop stars, but it was counter-culture pop, a jujitsu of commercial illustration. Like Pop Art his work was subversive, but unlike Pop he never brooked ironic cynicism. In his second act Sharp never averred from that beginning; he was never a “contemporary” artist, he remained sincere.

His later work gave his hometown look a certain mood. Half of late 20th century Sydney was splashed dayglo by Ken Done. A quarter belonged to Brett Whiteley, who decorated a paradise fit for his decadent lotus-eating dreams and his moneyed collectors. The last bit of Sydney’s self-image fizzed with Sharp’s memorials for a different kind of otherworldliness, in his remembrances of the Eternity man Arthur Stace — which you could see on the back wall of the old REMO shop on Oxford Street back in the ’90s. It was commissioned by Remo Giuffré — and the bizarre “genius” of Tiny Tim framed in the lost Atlantis of Luna Park (all three found their own uses for Matisse, the tutelar artist for a tropical metropolis).

Curiously, Sharp’s Sydney tended to night skies (contre Whiteley’s day), starlit and imbued with the promise of fun and love. In short, joy. He once compressed all his obsessions into a singular self-reflexive image, in his wonderfully witty poster for Tiny Tim, Eternal Troubadour, the Opera House, 5 Sept. 1982 — where Tiny Tim becomes the Opera House singing the title of the poster. 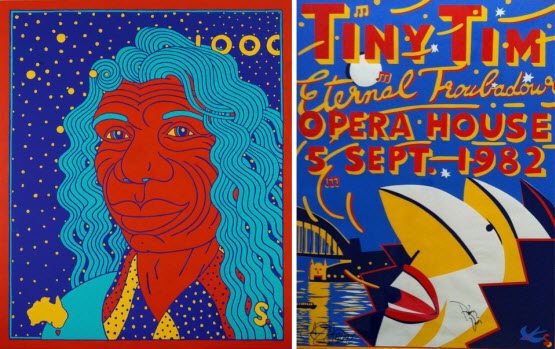 And only last year he was hung in the Archibald — his marvellous portrait of David Gulpilil, laid on in the moulded paint of his late mannerist work (not a period I liked so much). The paint was thickly sculpted into discrete areas of colour, bulging up from their boundaries; it would have involved great labour at 183x153cm but has the immediacy of a monumental postage stamp. Compare this brilliantly optimistic work with the image of Gulpilil which did win the Archibald (and the people’s choice) in 2004, a work in black and gray by Craig Ruddy; grimly martyr-like. That was called David Gulpilil, two worlds. Sharp’s is brightly titled The thousand dollar bill, which is as mischievous as it is pointed.