New York scales back. For a time, New York magazine appeared to possess the perfect print-digital model: a highbrow legacy media product (it began printing in 1968) that successfully confronted the challenges posed by the digital world. The magazine was founded as a counterculture New Yorker, with contributors including Tom Wolfe, Gloria Steinem, Woody Allen and Jimmy Breslin. In print it is beloved by 400,000 subscribers for its superb front cover art (none more stunning than this Hurricane Sandy image), superbly written long-form pieces on a divergent range of topics and its eye-catching infographics. Online, it is augmented by the sharp, knowing pop culture snark of its Vulture website. Several years ago, it even managed to poach op-ed columnist Frank Rich from The New York Times.

Yet, in spite of the kudos its weekly print product continually wins, it has been haemorrhaging advertisers and accumulating big financial losses. Today it announced that from early next year it moves to a bi-weekly schedule, with just 26 issues annually. “All of us here are romantics about print,” Anup Bagaria, chief executive of New York Media, told The New York Times, which ran the news today on its front page. “The thing that stopped us from doing it in the past … is the emotional hit that came with it.”

Somewhat ironically, the move was first mooted in October by Rupert Murdoch’s tabloid New York Post, which was retaliating for a long, juicy piece examining then-editor Col Allen’s place at the rag and ruminating on his possible exit. One happy sidenote: the editors confirmed today the publication’s much-loved Approval Matrix column will remain. — Andrew Murfett

“The secretary of Victoria’s Health Services Union has been asked by a West Australian court to pick up the tab for thousands of dollars her former campaign manager owes to a Perth sex worker.

The story made it sound as though Walladge owed the money for sex, but that was not the case. Walladge denied the debt entirely, and the Press Council smacked down the newspaper for not checking as to the existence of the debt before publication.

Correction of the day. The Sydney Morning Herald quoted someone for a story on a proposed motorway who said he owned Snowmaster, a second-hand catering equipment company. The original story said:

“‘It’s all right, it’s a good thing,’ said Simon Peters, the owner of Snowmaster secondhand catering equipment, who received a call from the government on Thursday asking about a price for his property.

“‘They asked me to name mine,’ Mr Peters said. He said he was told that a purchase was likely in early 2015.”

But Simon Peters does not, in fact, own Snowmaster. Why he told the Herald he did — and why the Herald spoke to him if he did not own the property — remains a mystery …

Front page of the day. Anti-government protests in Thailand have turned violent, with at least three people killed and about a hundred injured during clashes with police … 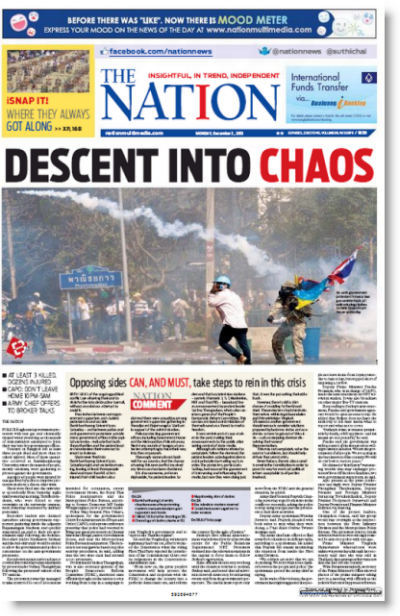 What would Jesus do (about tax)? … Nine locked out of Commonwealth Games … Fake News network …