News Corp columnists are at it again, calling for an inquiry into the ABC. But veteran journalist and former ABC Media Watch EP David Salter says the attack on the ABC is not about ideology -- it's business. 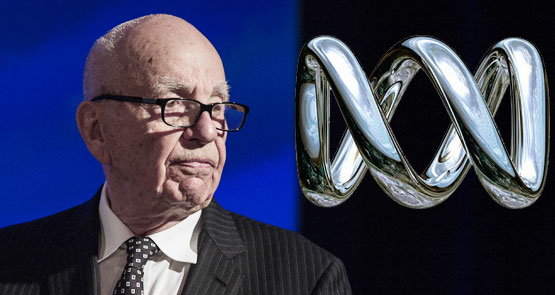 Mike Carlton, in Saturday’s Sydney Morning Herald, was bang on the money:

“With the Tories in power, the assault on the national broadcaster grows more vicious by the day. Unsurprisingly, the campaign is spearheaded by the Murdoch press.”

And as if to confirm Carlton’s credentials as a soothsayer, The Weekend Australian, on the same day, gave huge space to three lengthy anti-ABC commentary pieces. Long-serving Murdoch toady Greg Sheridan led the charge. Still pretending outrage over the ABC/Guardian scoop on our spying on Indonesia, he parroted the familiar News Corp company line:

“It is unclear why Australian taxpayers need to pay $1.1 billion of their money to support these activities …

“It is plain socialism for the government to run a business in competition with existing private businesses.”

On the op-ed page Grace Collier (who, she?) reached straight for her beheading axe. She urged the Coalition to liquidate any unsympathetic ABC board members:

“The new administration must, to govern properly and carry out the agenda it was elected to implement, neutralise the enemies in its midst and place people it trusts into key positions of influence.”

Madame Collier-Defarge has apparently yet to grasp the principle of independent stewardship that guides our autonomous national government organisations. Fortunately, help was close at hand. The very next day, in the Sunday Telegraph, that kindly old uncle of the Murdoch commentariat, Piers Akerman explained exactly how their master would like to tackle the ABC problem:

“It should be stripped back to its charter or broken up and sold, if possible to commercial interests.

“In a world of expanding media, a taxpayer-funded national broadcaster is anachronistic.

“Those who want to keep ‘our’ ABC, should fund it. Those who don’t should not have to pay for it.”

Of course, none of this is new. Over the past few weeks, just about every News Corp hack with a byline (with the honourable exception of Errol Simper) has queued up to take their dutiful swings at the national broadcaster. The difference now is that, come July, with the Coalition likely to have a workable majority on most issues in the Senate, those in the government who take their cues from Murdoch on media policy will be emboldened to start implementing his agenda.

How will it be done? What’s at stake? The clues are already there in the seemingly endless procession of pompous anti-Aunty editorials in The Australian.

The trigger, after the next little brouhaha in ABC news or current affairs, will be hyped-up outrage in the Oz followed by calls for an urgent “independent government inquiry” into the national broadcaster. The same newspaper that thundered so self-righteously against recent inquiries into media practice is already urging a “root-and-branch” review of all ABC activities and practices.

But the terms of reference for this inquiry will be skewed to deliver Murdoch the two big prizes he was always going to extract in return for his support for the Coalition over the past three years: a re-opening of the tender process for the Australia Television service so Sky News gets the contract; and a major winding-back of the ABC’s online presence, particularly in any content areas that compete with existing News Corp output.

That’s what this is all about. Business.

Murdoch well knows that no Australian government would have the courage to break up the ABC or sell it off, so while the new inquiry might go through the motions of appearing to consider those proposals, they are little more than diversionary ambit claims. The real object of the exercise will be to ensure that some innocuous-looking recommendations appear in the inquiry’s final report that will then provide the government with the justification for delivering Murdoch his pounds of flesh.

As Carlton warns: “Make no mistake. The fight for the ABC is on.”

Meanwhile, it will be interesting to see whether the Minister actually responsible for the ABC, Malcolm Turnbull, can resist this pressure and hold the small “L” liberal line. Unlike his Coalition predecessor in the Communications portfolio, Richard Alston, Turnbull isn’t naturally inclined to wreak vengeance on the ABC. He dislikes Abbott and his bully-boy style and wouldn’t force any major cuts or changes to the ABC’s operations off his own bat.

But that doesn’t mean he might not stand mute and let someone else start the pogrom. If he were smart, ABC chairman Jim Spigelman would invite Turnbull to attend the next board meeting and suggest he expound for a few minutes on what he sees as the ABC’s future. In other word, call the Minister’s bluff. What’s to lose?

I just returned from a couple of weeks overseas. There all I heard was the story about Australia spying on SBY’s and other government phones. As soon as I got back I discover that the debate here instead seems to be that the Guardian/ABC only published this story because they hate Abbott. What? I’m sorry but if that doesn’t show that Australian media is in the gutter then nothing does.

I can’t imagine that those those News Ltd. hacks and others who try to format the debate that way don’t even believe that themselves. Since Snowden has leaked that mountain of documents, this is essentially on the public record. Sooner or later the Indonesian media would have stumbled over it. Do the Andrew Bolts of this country really think that the Indonesian media would have sat on this? I dare say it would have been an even bigger scandal if they reported it first and then found out that Australian media had been aware of this but chose not to report it.

Meanwhile we’d all be better off, and safer from phone hacking, if News was broken up and banned from our shores. Piss off Rupert!

Limited News can sit on the Right sort of bad news – they can’t control the negative publicity and news for their Limited News Party coming from the ABC.
When it was Labor stumbling in power and the ABC would parrot them, that was all Right, but now, when the ABC picks up on “Conservative cock-ups in government” and exposes them, that’s different, “This time it’s personal!”?

Saugoof: ” . . .the debate here . . .”. What debate? Perhaps I am missing “the debate” because I do not read Murdoch’s newspapers and would wear gloves before I touched one.